Curtain Call’s Kindertransport Is A Journey To Buried Secrets 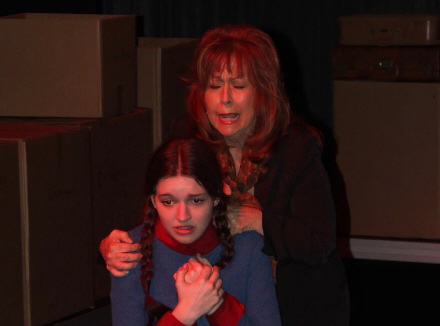 Hearing that Kindertransport is a play about Jewish children evacuated from Nazi Germany to England will likely summon expectations of an oh-so-respectful epic about thousands of courageous youths coping with families rent apart and uncertain futures as an orchestra swells behind tableaus of bright shining faces.

But Diane Samuels’ drama mounted by Curtain Call Playhouse only uses that as a starting point as it focuses on one child’s growth to explore much more sophisticated questions about assimilation versus heritage, survivors’ guilt, mother-daughter relationships and what constitutes identity.

It’s a mystery story. Shuttling between 1980s England and time travelling back to Germany and Manchester from 1939 to 1947, the narrative juxtaposes two seemingly separate worlds. The mystery is the secret that connects them, uncovered layer by layer. The initial connection is no real surprise although it takes Samuels quite a while to acknowledge it. But then it becomes clear that something far darker is still to be brought into the light.

Some context: Curtain Call has been touring its productions at multiple South Florida venues for 20 years, just now finding a base at the new Pompano Beach Cultural Center. Paying a pittance to its actors and working with the most modest of budgets, it has developed a reputation for earnest productions that are noticeably cuts better than amateur theater but not close to the level of a Palm Beach Dramaworks or GableStage.

So, other than one strong asset in the actress Kris Coffelt, this production is serviceable but not as enthralling and moving as Samuels’ intriguing script promises. Although director Jerry Jensen never lets the elegiac pace drag, the evening never quite vibrates even though he has coaxed decent performances from his cast.

Half of the alternating story depicts Faith (Jennifer Coe) preparing to move from   the London suburb home she has shared with her mother Evelyn (Coffelt) and her grandmother Lil (Joanne Marsic). All three love each other but emotional distance and unresolved issues bristle between Evelyn and Faith.

On the same stage but 40-plus years earlier in Hamburg months after Kristallnacht, nine-year-old Eva Schlesinger (Lindsey O’Neill) is being comforted by her mother Helga as she packs her few possessions including family heirlooms secreted in her boots. As she attaches a yellow numbered tag, Helga reassures Eva that they will bring her home soon, or, at least, meet her in England. We know that won’t happen. And perhaps Helga does too.

The show follows Eva’s lonely terrifying train trek across to England, punctuated by threatening creatures such as a Nazi border official (Joel Kolker). It’s a girl’s-eye sequence that that inexplicably doesn’t play as effectively here as it should.

After a ship lands her in England, she is taken in by – no surprise here – Lil, an independent unmarried blue collar matron. The play then tracks the evolution of their quirky spiky bomding over the next eight years as Eva’s horrifying past fades and she embraces her new environs.

Interspersed are scenes of Faith in the family attic. While taking a last look at mementoes of her life, she comes upon boxes of Eva Schlesinger’s belongings from her stay with Lil, including a storybook in German about a boogeyman-like “ratcatcher” who abducts all the children from Hamlin, sort of half the Pied Piper tale. Faith questions Lil who strongly rebuffs the inquiries, but Faith persists. Finally, Lil acknowledges what can’t be too much of a spoiler: Evelyn is not Lil’s natural daughter, but indeed is Eva. Faith feels that her mother has lied to her all this time, emblematic of their relationship.

But when she confronts her mother for an explanation, an anguished Evelyn only dives deeper inside herself and refuses to discuss it. Something else is at the heart of this. That carries the second half of the play as the truth is exposed, and we see the decades-long ripples of decisions made and regretted. It is the nature of the secret finally revealed that illuminates all those themes mentioned above.

The cast does a respectable job, with O’Neil smoothly morphing as she become ever more English in accent, in attitude and in mien. Under Jensen’s direction, Marsic as Lil becomes the glue, smoothly switching instantly between the two eras and cementing their connection.

But Coffelt, one of the troupe’s founders and an experienced theatrical denizen, achieves a deeper, more naturalistically credible performance than her colleagues. Initially, her brusque Evelyn seems like just another middle-class hausfrau navigating an affectionate but fractious relationship with her daughter. But even then, Coffelt skillfully betrays that something terrible is haunting this woman, something so awful she can barely contemplate it. Once the outlines of that pain sharpen, Coffelt’s agony does as well.

The morning before last Sunday’s matinee, Marah Lieberman who plays Helga was injured in a hit and run accident and was replaced for one day by Nicole Perry who read from a script with two hours rehearsal, and acquitted herself well.

The production generates little electricity and lacks that extra level of polish. What it does have is a director and cast clearly committed to the work. Their passion and Samuels’ insightful script drive this train to destinations worth thinking about after the house lights come on.