‘Danny and Sylvia’ Surefire Crowd Pleaser At The Willow 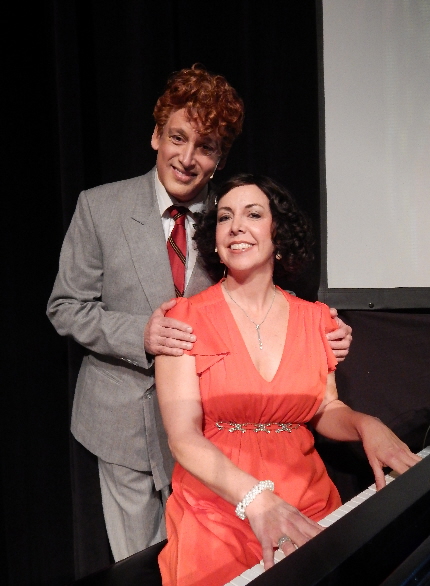 Larry Buzzeo and Katie Angell Thomas as the title characters in Danny Kaye and Sylvia: A Love Story / Photo by Carol Kassie

Director Larry K. Bramble couldn’t have found a more perfect fit in Lawrence “Larry” Buzzeo for the role of Danny Kaye, which leads to the question of what came first – the idea to cast Buzzeo as the 1940s song and dance man or the way that the perky little musical Danny Kaye and Sylvia: A Musical Love Story would, no doubt, be a guaranteed pleaser for the crowd that attends shows at Willow Theatre at Sugar Sand Park in Boca Raton.

Whatever the answer to the “what came first, the chicken or the egg” query surrounding the Jerry Seltzer (Black Box Booking) and Hy Juter (Jupiter Theater Company) production, what matters is that the show delivers because of the aforementioned two elements – Buzzeo as Kaye and a crowd-pleasing two-hander that is filled to the brim with memories for audiences who will find familiarity in Kaye’s story – many of whom may have grown up alongside of his career trajectory, from Catskills comic to Hollywood movie and television star.

What those same audiences learn in the biomusical is that Kaye’s career was given a boost by the talented Sylvia Fine (wonderfully played here by Katie Angell Thomas), a composer and arranger in her own right.

Yes, this is the role Buzzeo was born to play. When the actor makes his first appearance on stage with a mop of iconic red hair that makes him the spitting image to Kaye, yes, there’s applause.

The book and lyrics is by Robert McElwaine, a former senior publicist for Goldwyn Studios in the 1950s, where he met Danny Kaye and became his publicist and confidante. McElwaine died in 2010 at the age of 86. The music is by McElwaine’s childhood friend Bob Bain, who played bass on a number of movie scores (for television shows, he’s the bassist you hear carrying the lead on The Munsters and Bonanza soundtracks.)

The two-act show, which had a successful run off-Broadway, takes place from 1936 to 1948 in New York, Hollywood, and London. Its one set features a dressing table and hat rack stage left – Kaye’s play area. On stage right is a piano – Fine’s play area. Center stage is where they meet in the middle – literally and figuratively – on a backless love seat. Upstage is where musical director Annaliesa Trethewey holds all the tunes and singing together with live piano, with preset orchestrations and rhythms controlled by the keyboard.

There’s also a single backdrop with projections, which help set the scene – a brick wall for the rehearsal hall, a crystal chandelier for the London Palladium, movie posters for Kaye’s foray into Hollywood. Nice. Uncluttered.

“I was a young entertainer during the wrong time,” Kaye says in his opening. But all that is about to change when he goes for an audition and meets Sylvia Fine. While he’s prepared to do his regular audition song, “La Vie Paree,” Fine gives him a suggestion. “Sing ‘Danny Boy,’ ” she suggests. He does and gets the part.

He’s quirky and goofy to Sylvia’s staid normalcy, but she likes him, of course. She tells him of a job at Camp Tamiment as a tummler in the Poconos. It’s the beginning of their collaboration, their love affair, their eventual marriage.

Perhaps the one thing missing from Thomas’s performance as Fine is the character’s motivation. In real life, Kaye was the perfect vehicle for Fine to pin her songs on – she had a knack for writing Gilbert & Sullivan-esque repartees and Kaye  happened along at the right time. He was the model in which the musical tailor could hang her clothes. Here it’s quizzical as to why the level-headed, might-be spinster would fall for the overly rambunctious David Danny Kaminsky.

Yet Thomas’s singing, especially the cabaret ballad “Can’t Get That Man Off My Mind,” makes the yearn for a deeper examination of Fine disappear. It’s one of the more touching original songs in the show and all the more so because of Thomas’s delivery.

The musical’s writers have lovingly injected some Fine-Kaye originals and even a Kurt Weill-Ira Gershwin ditty written specifically for Kaye.

Buzzeo does a bang up job with Fine’s “Anatole of Paris.” Too bad there wasn’t a way for the writer to weave in the story of this song, one of Fine’s best and written to utilize Kaye’s ability for rapid delivery. He first performed the song in 1939 at Camp Tamiment and continued to sing it throughout his stage shows. It was also featured in the 1947 Samuel Goldwyn film, which starred Kaye, The Secret Life of Walter Mitty.

The Act I closer is meant to bring down the house; it’s the Weill-Gershwin “Tchaikovsky (And Other Russians”)” the tongue-twister which Kaye introduced in the 1941 movie “Lady in the Dark.” The rapid tempo, patter song is an exercise in vocal acrobatics in the naming of 49 composers, from Malichevsky to Arensky and Kvoschinsky to Rachmaninoff. Buzzeo nails it.

Act II opens with Kaye a Hollywood star, but feeling a bit bullied by Fine who is now deciding what parts he will and won’t take. He sings McElwine-Bain’s touching “She’s Got A Fine Head on My Shoulders.” He stands up to her bullyness by booking himself into the London Palladium. He’s a bona fide hit, and without Fine.

But the break up doesn’t last long. In true romantic comedy fashion, he misses her, she misses him. They do a bit with two transcontinental telephones – she wants to call him but won’t, he wants to call her, but doesn’t. He does. She picks up. It ends up being a sweet reunion.

For Kaye fanatics, they’ll remember that the showman always closed his performances with the audience participation song, Cab Calloway’s “Minnie the Moocher.” However, in this production, it seems to arrive abruptly and without the big grand finale necessary to tie up everything all nice with a bow.

Nonetheless, the audience has fun, Buzzeo plays a dream role, and everyone leaves the auditorium knowing a little more than they did before about the comic from Brooklyn who inspired legions of folks after him including the legendary Robin Williams and current movie slapstick kingpin Will Ferrell. They get to know his talented wife, Sylvia, who grew up in Brooklyn blocks away from her future husband, although they never met until they were adults, and who received Academy Award nominations for some of her movie scores. A true musical love story.