Posted on November 8, 2014 by Bill Hirschman 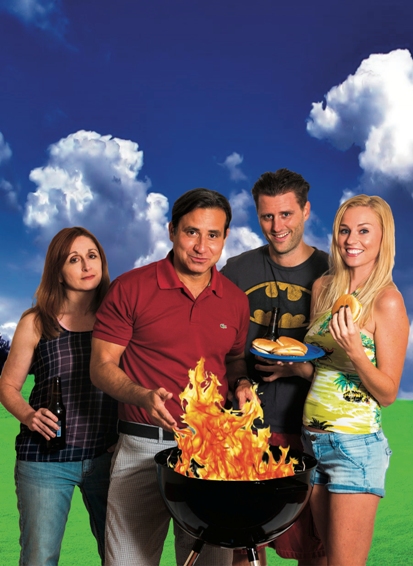 Just before the lights go up on Mary and Ben’s backyard patio in Lisa D’Amour’s play Detroit at Zoetic Stage at the Adrienne Arsht Center, Hootie and the Blowfish’s ‘Time” plays. The lyrics are something to be paid attention to as they echo the sentiments of where our four characters have arrived in their current state of affairs: “Time, why you punish me, like a wave crashing into the shore, you wash away my dreams.”

When the lights do go up, Mary (Irene Adjan), a paralegal, and husband, Ben (Chaz Mena), a recently laid off loan officer, are chit chatting with their new neighbors. Sharon (Betsy Graver) and Kenny (Matt Stabile) are a newly married couple who have just moved in next door. She works in a “phone bank” — a customer service call center, while he’s taken a job in a warehouse.

Life at Mary and Ben’s appears on the surface to be copacetic, from their Pier 1-esque outdoor table amid a quaint suburban setting, to their relationship, which seems like its weathered a few storms and is now settled into apathetic domesticity. A sign visible through the sliding glass door reads “Home is where our story begins,” and in the case of D’Amour’s play, it certainly is.

Yet, there are subtle indications that what lies beneath may be a bit bumpier than what’s first perceived. D’Amour offers symbolic gestures: The patio door that doesn’t slide smoothly and the tabletop umbrella that has its own ideas about staying upright.
It seems that with all the friendly banter, the individuals, whether of their own making or not, have become shaped by circumstances.

Sharon snaps a rubber band, part of a conditioning ritual for her to stop her barrage of using four-letter words in conversation. She has no filter, basically blurting out whatever hits her at the moment. When she realizes that Mary and Ben’s backyard is so close to hers, she says “I could spit, it’s so close,” and she does.

Despite the financial setback of her husband losing his job, Mary still wants to keep up appearances. She serves the new neighbors caviar and crackers. She brags about Ben working at home on his new financial planning business. That is, until she starts drinking. Late in the evening, she runs next door, banging on the door and unloads on Sharon.

The layers begin to peel away. In vignette after vignette, the audience watches as the weaknesses begin to unravel. Ben has been spending time during the day on the internet, but not as devoted to his financial planning business as he has let on. Sharon slips and smokes pot with a neighborhood electrician and she’s worried she could slip even further back into her addiction. “I open my eyes every morning and all I want is a pipe to smoke. It’s like there’s a fire burning in the center of my head,” she tells Mary, “and the pipe is the water that will put it out.” Kenny only wants to let loose and go to a strip club.

The title of the play, too, is a metaphor. The play isn’t set specifically in the Michigan city, but represents a place where the American dream that was once held so dear has rotted away. There are other messages about the general malaise of life in the 21st century. Sharon perhaps has the most telling line in the play when she says: “It’s so weird how nothing ever happens. You keep hoping something is going to happen, and it never does.”

While it’s easy to take the play at its face value, director Stuart Meltzer offers a purposeful pacing that gives the show its perfect ascent. Every once in a while, ambient noise of planes flying over the suburban houses can be heard, and it adds to the energy — this slow ascent that arrives to full throttle. By the time, the four characters are creating mayhem in a manic and drunken backyard barbecue dance, we’re engaged in the frenzy.

Each of the characters climb, too — their peaks and valleys in tune to the direction of D’Amour’s script. Graver’s Sharon is the most volatile. The actress uses every opportunity to dig deep for a surprise whammy of teeter-totter emotions. Adjan’s Mary is more slow burn, yet fragile and brittle — giving the back story that’s she’s become accustomed to a life that ended up not of her own making. Mena peppers Ben with idiosyncrasies – he fiddles with the reading glasses that dangle on a thin strap around his neck, he laughs sometimes nervously, sometimes full on, he’s entirely self conscious, yet keeps up a veneer of confidence.

Stabile’s Kenny plays like a caged animal, calm on the surface but ready to break free at any moment. When he leads the group in the backyard ritual, he’s the Alpha Dog and Stabile has perfectly positioned his character to take on this role. David Kwiat shows up as Frank at the end of the play for a telling monologue that puts previous events into perspective. Kwiat’s monotone delivery works best as he conveys the way things used to be. “Such a perfect memory,” he says as he describes what the neighborhood was like when it was a real community.

Michael McKeever’s realistic set undergoes a transformation late in the play in a “how’d they do that?” moment. The rest of the production team delivers on creating the realism so necessary to keep the show rooted in believability with costumes by Estela Vrancovich and Marcelo Ferreira’s lighting design. Matt Corey’s ambient sound adds bucolic effect.

D’Amour’s play, a finalist for the Pulitzer Prize, is a thought-provoking piece of theater. The Zoetic Stage production finds its own complex groove in Detroit to present a must see in Miami.