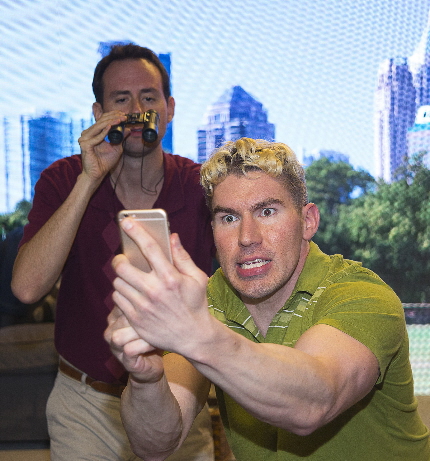 A few minutes into Island City Stage’s Angry Fags, the two title characters, Bennett and Cooper (Michael Scott Ross and Craig Moody) are picnicking on pistachios and pretentious cheese in front of a projection of the Atlanta skyline.

They discuss Steel Magnolias, and the conversation spins off into distinctions between the Robert Harling play and the Herbert Ross film, which then prompts a cute, almost-Brechtian discussion of the immediacy of live theatre vis-a-vis movies—namely the verisimilitude of sharing the same space as the actors. Director Andy Rogow drives home the point by gradually directing Ross and Moody downstage, until they’re a few legroom-cramping inches from the front row of the Abyss Theatre.

But how about action-driven stories? Steel Magnolias may work better as a play, but would Die Hard? As one character asserts, “You can’t do action onstage.” Island City Stage’s movielike production of Topher Payne’s savage satire will attempt to refute this over the next two and a half hours, which will see bombs detonate, poisons dispensed, indigents bludgeoned, coworkers Tased, and lethal gunshots fired, all of it realized with the aid of George Wentzler and Mark Demeter’s ever-changing video projections and David Hart’s crucial sound design.

The savvy integration of this immersive technology represents a cutting-edge turning point for this esteemed company, which, in its $30,000-renovated new home at Infinite Abyss space south of Five Points in Wilton Manors, has also produced its first multi-level set. These bells and whistles go a long way in elevating Angry Fags, but the play still suffers from elephantine pacing and a sense of crippling logorrhea. A good trim of Payne’s mammoth, overstated treatise is more than just judicious; it should be required by any company endeavoring to produce it. If Tarell Alvin McCraney can transform Hamlet into a 90-minute action story, then Payne’s source material is far from sacrosanct.
Yet there is a modicum of brilliance awaiting patient audiences. Gay roommates Bennett and Cooper, whom we first witness detonating a bomb outside the office of an unknown victim, are on a quest to root out the perpetrators of anti-gay propaganda—your Phelpses, your Falwells—that infest the byways and backwoods of Georgia. The majority of Angry Fags flashes back from the moment of the bombing (there’s that movie-style structure again), beginning with the news of a deadly beating, outside a gay bar, of Bennett’s ex-boyfriend. Rather than mourn the tragedy with platitudes and public pleas, Bennett and Cooper decide to take vengeance into their own hands—musing, like erudite Hitchcock characters, on the possibility of systematically slaughtering their oppressors, and then actually doing it.

Along the way, the impotence of victimhood acquiesces to the sociopathic addiction of vigilante justice, as if Harvey Milk and Dan Savage were to transform into Leopold and Loeb. This moral complexity of this premise is electrifying when Payne stays on point, which isn’t often. He bogs his story down in a subplot about a Georgia Senate campaign between a Christian-right figurehead (Merry Jo Cortada, nicely humanizing her Tammy Faye Baker avatar) and a proud lesbian incumbent and former activist (Sharyn Peoples) who has had to temper for passion for the sake of political expediency. Bennett is her speechwriter, and Gretchen Porro and Jeffrey Leshansky play fellow-staffers Kimberly and Adam, with romance eventually sparking between Bennett and Adam.

Satire works best when it is distilled and unwavering, and Angry Fags is in desperate need of a dramaturgical finesse. Payne tries too hard to cram too much into the play, which attempts to address every issue facing contemporary gay identity and nearly drowns in its earnest sanctimony. It crackles, finally, when the gravity of Bennett and Cooper’s machinations reach the point of no return, providing a visceral showcase of wordless panic from Porro, whose performance is the show’s most convincing. But by then we’ve grown exhausted from listening to overlong stump speeches, pop-cultural ephemera, courtship rituals, and police investigations (Tracey Cramer plays a police detective, in a folksy performance that feels a bit too modeled on ‘80s cop dramas).

Even so, Island City’s production finds notes of poignancy and wit throughout. Bennett’s moving visit to his dying ex-boyfriend’s bedside is deftly complemented by the unfeeling soundscape of life-support machinery clunking and hissing. Peter Lovello’s costume design includes a hilarious T-shirt for the flamboyant Cooper, an image of Mister Rogers with the text “I wore cardigans before it was cool.” When Cortada’s right-wing zealot returns to her office with takeout food, the logo on the bag is, naturally, Chick Fil A.

These are minor atmospheric details another company might not pick up on. It’s too bad that even in Island City’s capable and innovative hands, Angry Fags still feels like a work in progress.