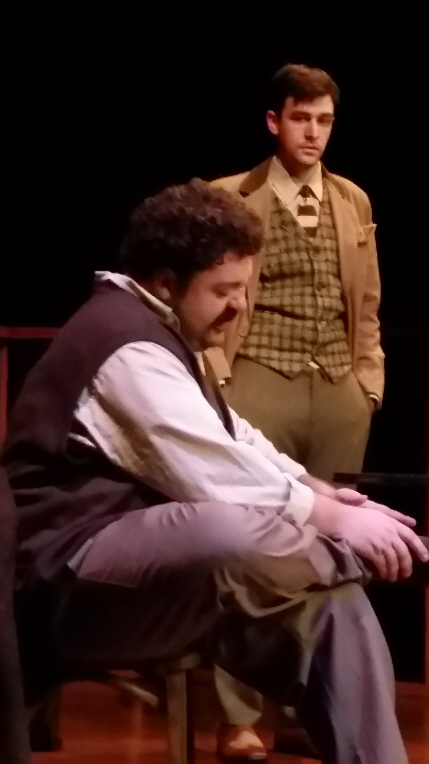 If you’re going to stage a dorm debate about the meaning of life, the role of religion and science, suffering, love, guilt, the predilection of populaces to totalitarian governments, and the awe-inspiring loveliness of the universe, it would hard to find two more interesting contestants than Albert Einstein and Franz Kafka.

Miami playwright Mario Diament’s Franz & Albert receiving its U.S. premiere does a reasonably intriguing job fictionalizing a meeting that likely happened when the fledgling writer and the up-and-coming theoretical physicist attended an evening soiree for intellectuals in 1911 Prague.

Surprisingly, the avalanche of ideas, although mechanically didactic, is indeed thought-provoking as the two men volley colliding concepts, testing each other’s validity. On one level, their outlooks seem diametrically opposed: Kafka pessimistic to the point of fatalism and Einstein optimistic about the mysteries of the cosmos. But a careful hearing detects faint overlaps that say something about human beings that will take deeper thought long after the play ends.

This two-hander is not as effective as a similar premise in Freud’s Last Session in which C.S., Lewis visits the psychoanalyst, or remotely as complex as Copenhagen‘s meeting of Niels Bohr and Werner Heisenberg. But there’s a good deal of philosophical meat for those who enjoy this genre.

The set-up, pretty much historically accurate, is that evening social get together across the town square from a famed 600-year-old astronomical clock – appropriate since our heroes are deeply involved with the concept of time.

Hiding behind a plant on a terrace is Kafka (Daniel Leonard), currently an insurance claims inspector spending his free hours turning his nightmares into manuscripts that have yet to be published. He is hiding because he believes a faceless government agent is tracking him for unknown reasons.

Einstein (Zack Myers), who has just been playing a Mozart piece on the violin in the main salon, finds the strange young man and begins small talk that flows into the aforementioned topics and a half-dozen others.

The creations on stage could not be more different. Kafka is slender young man uncomfortable in his own skin, awash in facial tics and so tightly wound in on himself that you think he may snap (the script says “fidgety”). While he is unrelievedly pessimistic, there is something likable about him as well. Einstein is a tweedy, scruffy, pipe-smoking academic a few years older, a bit portly but exuding a relaxed aura of affability with a toothy grin.

Over 80 minutes, the two explain to each other their underlying theories, from Einstein’s discovery of the space-time continuum as key to his theory of relativity to Kafka’s terrifying vision of an insane government — soon to become reality rather than a paranoid’s perception.

Time does not really exist the way we think, Einstein says, it’s all a relative matter of perception. The past, present and future exist simultaneously. That makes Kafka say in horror, “But this is awful! What are we doing here? Are we but actors interpreting a text that’s already been written?”

Although Einstein is more likable, Diament gives him flaws as well. When he postulates the potential energy that could be released from the atom, he acknowledges that while it could be a boon if someone learns unleash it, it also could destroy the world – a statement uttered with an appalling blitheness.
FRANZ : Doesn’t this possibility torment your conscience?
ALBERT: No. Why? It should?   ….
FRANZ: … I’m afraid you’ve spent too much time observing the cosmos and too little paying attention to what is happening down here, on Earth.
ALBERT:   What makes you say so?
FRANZ: The nagging suspicion that your humanitarian ideals do not go beyond the comfort zone of wishful thinking. Look around you, Professor Einstein. The only constant here, is suffering.

Both are Jews and while Einstein is aware of the Czech establishment’s anti-Semitism, Kafka is local and has lived with it his whole life. That has helped forge Kafka’s cynicism and he tries to explain to Einstein just how heinous the prejudice is in the community.

The play also draws parallels to our own time in several passage. Kafka says, “I mistrust revolutions. Not because I don’t believe in the need for change, but I cannot deceive myself regarding its consequences. This marvelous socialist youth who takes to the street. One can only admire them. So self-assured, so confident, so full of convictions. They control the street and think that they control the world. But they don’t realize that they, in turn, are being controlled. Because behind all this pageantry follow the professional politicians and the bureaucrats, all these modern satraps for whom these young idealists pave the road to power. Revolutions always begin with a Robespierre and end with a Napoleon.”

Like most debates, no one really wins, although Einstein does dissuade Kafka from suicide. These kinds of plays are not about a dramatic arc so much as an opportunity for the audience to hear different views of life and weigh them for themselves.

Diament, a journalism teacher at Florida International University, is a playwright with Carbonell nominations for The Book of Ruth and A Report on the Banality of Love. The Argentinian-born author writes in Spanish and his works are deftly translated into English by his wife, Simone Zarmati Diament. His writing is believably conversational even when great minds are expounding profound philosophy.

Director Ricky J. Martinez, who also helmed the play Footprints in rotating performance here, has kept the production as fluid as it can be with basically two brains batting ideas at each other. Crucially, he also ensured that the actors clearly know what their lines mean no matter how Byzantine the debate, which allows them to make most of it clear to the audience – unlike a Tom Stoppard play in which ideas flow by too quickly for anyone to grasp.

The play under Martinez’s hand is leavened with stray streaks of humor. When Kafka describes his dream about waking up as an insect…

ALBERT   So what happens to you when you discover your metamorphosis?
FRANZ (Brightens.) Metamorphosis! You know? I hadn’t thought of that word. It is very fitting. Thank you. Maybe that’s how I’ll decide to title this novel if I ever write it. The metamorphosis. Excellent!

The two actors work hard at their craft. Their starkly differentiated characterizations are interesting, but their external manifestations, like Einstein always looking heavenward and Kafka forever wringing his hands, wear out their welcome about halfway through the evening. Incidentally, a You Tube video of the Argentinian premiere last summer did not portray Kafka with physical tics.

One warning: Most of the play is staged way downstage even though seats surround the platform on three sides. Make sure you get a seat in the center section.