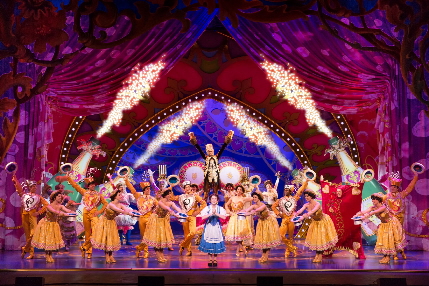 Enchantment, the kind that makes you forget you’re watching theater, is not quite the right word to describe the current tour of Disney’s Beauty and the Beast from Broadway Across America, but a different kind of magic is at work in the Arsht Center.

Every single hand gesture, every arched eyebrow, every grimace or grin, every inflection on every line, every single moment is carefully choreographed and frozen in place. Every two or three seconds is consciously filled with some bit of director’s business accumulated no doubt piece by piece through 20 years on Broadway or on the road.

And yet it works. Undeniably, this sharply honed, finely tuned, precisely executed piece of theater inexplicably does not seem stale. If there isn’t an overflowing sense of soul pouring from the stage, no one connected to this perfectly manufactured work is coasting like a bored 20-something working for minimum wage as a theme park character. Everyone is throwing every shred of craft they possess into it.

You know it works because the opening night audience went bat crazy at the curtain call – a more uninhibited response than to The Book of Mormon three weeks ago. Maybe it was all the little princesses in their miniature ballgowns bought at Disney World, or maybe it was their older sisters sitting in clutches of three or four who will return in March for Wicked, or maybe it was their parents, relieved that the fairy tale not only was laced with a dozen politically correct morals for the kids, but also enough punny wordplay aimed directly at them.

No, it’s not moving very often, although only a Florida state legislator could resist their throat closing up when Chip emerges as a real boy or when the title characters tentatively embark on their first waltz. And yes, not even a stage show financed by Disney can produce the kind of all-stops-out scope that an animated movie can provide. But no cartoon can deliver that electricity crackling from a live production number like the tavern celebration in “Gaston.”

Still, it does feel like a cartoon come to life reflecting the Disney ethos of highly-polished carefully-storyboarded moment-to-moment writing and direction. The actors have invested some of their own personalized charisma and charm, notably Ryan Everett Wood as the Beast with his alternating bluster and adolescent-at-his-first-dance awkwardness. He and the winsome Jillian Butterfield as the resolutely independent Belle have the requisite clarion voices for slamming out those “deeply-felt” power ballads and anthems. But you can tell that they, and everyone else, are working off a template as clear-cut as a blueprint, from Gaston sucking his thumb to Belle’s father admiringly clasping his hands at just the right moment while Butterfield is belting out her song of self-revelation “A Change In Me.”

Not that 95 percent of the audience will catch them at it. Cameron Bond as the blowhard Gaston is especially skilled at inhabiting the two-dimensional bully. When Belle responds to his suffocating harassment, “You are positively primeval,” Bond responds “Thank you” with just the right amount of clueless blindness brought on by overweening ego.

This production is the 2010 reboot that freshened up three previous tours, the last ending in 2003, believe it or not. So if you’ve seen the show before, this one doesn’t break much new ground. But if you haven’t or you want to take someone who hasn’t, this is as good a production as you can ask for.

This entry was posted in Performances, Reviews and tagged Adrienne Arsht Center, Broadway Across America, Disney's Beauty and the Beast. Bookmark the permalink.