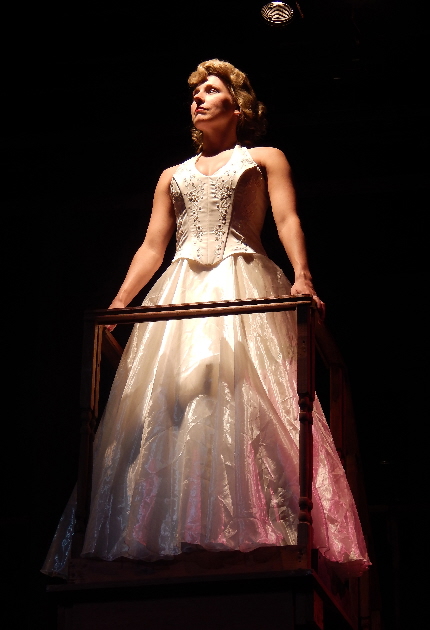 Even though it’s late March, we remain in one of the busiest seasons in South Florida theater. If you don’t see a review of a show that has opened while looking at the top of the front page, please scroll down the page or use the search function.)

A supremely confident and corrupt demagogue whips up the sheep in a populist uprising targeting a change in the government status quo.  While that sounds like the latest CNN report, it’s actually Andrew Lloyd Webber and Tim Rice’s Evita.

Whether it’s because the resonances of this 38-year-old cautionary musical threaten to deafen any sentient audience in 2016, or because the Broward Stage Door production is unassailably strong, or more likely both, this revival lands more effectively than any recent offering at the Margate theater.

The reason does not matter. When Jenna Pastuszek mounts a thin staircase whose high end is downstage, looking down at the audience, outshining her gown and gems, and pours out “Don’t Cry For Me, Argentina,” you are mesmerized by a master manipulator who could teach Trump a thing or two.

Director Michael Leeds and choreographer Kevin Black do not reinvent the sung-through piece, but their inventive staging is totally their own, giving the evening a freshness and vibrancy missing from the lush Broadway revival and national tour.

They and musical director Caryl Fantel make up for a limited budget and digital tracks by focusing on the vocal power of their full-throated leads: Pastuszek as the small town girl whose ambitions powered her to the presidential palace; Rick Hvizdak as an arrogant and morally bankrupt Peron, and Trevor Whittaker whose grungy sardonic Che exudes curdled calcified cynicism.

Leeds and Black particularly have avoided any whiff of Harold Prince’s original staging while inserting their own ideas. First, they commissioned Michael McClain to create a seedy rundown two-story tango café as the setting complete with a second-floor gallery and five doors to rooms where the tango going on has nothing to do with dance.

Then they used a long staircase that divides into two pieces to represent different locations. Instead of using that gallery for the “Don’t Cry For Me” song as most productions do, they placed Evita as previously described alone on the narrow perch and high above the heads of the audience as if she has scaled the pinnacle of her dreams.

For “High Flying Adored,” sung alone by Che accompanying himself solo on a live acoustic guitar, Evita pulls out the shabby old suitcase that she originally brought to Buenos Aries and reminisces of her innocent past, exemplified by a dream figure of her dancing.

Obviously, the casting goes a long ways toward the success, so the surprise is that Evita and Che were cast through video submissions.

Pastuszek is a New York-based mezzo with a searchlight bright belt, but who is always acting through her singing. In her early scenes, she seems the backcountry teenager with a kewpie face, youthful exuberance and naiveté although her ambition will drive her to do anything to escape her hometown. But Pastuszek’s characterization turns corners as Evita almost fools herself into believing her spiel that she gathers power and wealth only as a surrogate for her “beloved” working people. And while she is singing the hypocritical manipulation “Don’t Cry For Me, Argentina,” Pastuszek perfectly captures Evita’s uncensored joy of someone savoring having achieved her dreams.

Hvizdak’s Peron is a mixture of noxious confidence, disdain for the people who have empowered him and a few well-placed jitters knowing the fragility of power. His baritone suggests a hidden taste for cruelty.

Whittaker, an Australian via England, easily dons the reproachful chastened persona of Che. With long unkempt hair and a scraggly beard, this Che was permanently disillusioned years ago by Evita’s betrayals and yet he still wrestles with her undeniable appeal.

You never know what you’re going to get at Stage Door, but this is one of those productions that co-founder Derelle Bunn can be uninhibitedly proud of.