Don’t Scratch This Itch At MTC 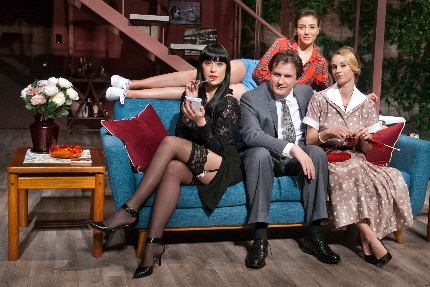 But MTC has missed the target so badly in its misbegotten revival of the 1952 sex comedy The Seven Year Itch that you only thing you want to scratch is your head.

Start by asking why anyone would revive this misogynistic, self-indulgent, sexist dinosaur with little to say to the 21st Century. No, I do get it: In its day, sixty years ago, playwright George Axelrod constructed what was then meant to be a wry sophisticated satire about everyday men (like those in the theater audience) going middle age crazy by getting lost in sexual daydreams and childishly pursuing dream women before discovering that home sweet home is best.

But more than a half-century later what was once biting social observation is a calcified cliché in television sitcoms and fourth-rate films. Perhaps MTC artistic director Stephanie Ansin and designer Fernando Calzadilla meant to recreate a period piece like a Margaret Mead expedition into sexual relations. But what a waste of their considerable talent, resources and imagination.

Then ask why with all the solid actors available (including Chaz Mena who has a small role in this outing) why saddle the very difficult central role on Aaron Glickman (a lovely man, we’re sure) who is either unequal to the role or has been directed to play it with all the comic finesse of Hot Tub Time Machine 2.

The Seven Year Itch was a Broadway smash and later was made into an iconic film by Billy Wilder with Tom Ewell and Marilyn Monroe. It tells of a 38-year-old advertising/marketing man in New York City whose wife goes to the country for the summer, leaving him at loose ends to ineptly pursue a lovely actress living upstairs.

Much of the humor and the best part of the show comes from watching the hero’s intentionally ludicrous sex fantasies come to life in his mind a la Walter Mitty – until he actually meets the neighbor and is faced with the real prospect of consummated adultery.

The entire undertaking is not a disaster. Diana Garle is a persuasive, winsome object of Richard’s obsession. Garle and Ansin wisely do not make “The Girl” a Monroe-like sexpot, but simply a gentle, quirky, nubile and slightly dewy 22-year-old woman trying to get her bearings in New York City. Why “The Girl” gives in to Richard’s ministrations is never made credible, but Garle remains one of the production’s strengths.

Glickman is secretary of the MTC board of directors (which might explain his casting). His day job is publisher of SocialMiami.com, but his playbill bio alludes to stage and film credits when he lived a previous life in Los Angeles. Richard is appropriately a doughy, nebbishy Everyman, but Glickman’s Richard is a sweaty, slobbering, boorish, arrested development creep whom no woman would come within ten feet of, let alone kiss, let alone sleep with, let alone marry.

His perpetually over-the-top one-note performance is dumbfounding. Much of the time he is nearly yelling his lines, when he’s not shouting them with all the subtlety, cadence and variety of John Belushi and Randy Quaid operating a jackhammer. Why Ansin allowed this is baffling. Even in the broadest farces, even Warner Brothers cartoons, the humor works because you never catch the actors acting; they are inhabiting their characters. We never believe Glickman as Richard for ten seconds in a row because he is always giving a performance. To be fair, these roles are very challenging to pull off which is why it took a skilled light comedian of Tom Ewell’s skill set to make it work originally. Richard spends much of the play talking to himself, a technique that is tough to pull off, especially with Glickman slamming every sentence as if he was attacking it.

Among those who hit the right notes are Betsy Graver as the perfect pearls wife. Mena plays a friend who might be a temptation for the wife; Linda Bernhard, Jessica Farr and Anardia Burgos play Richard’s conquests during his fantasies; James Howell is a psychiatrist whose book Richard is shepherding, and Shira Abergal plays Richard’s daughter who does a wild and weird talent show tap dance.

Credit Ansin with skillfully moving her characters around Calzadilla’s evocative set of Richard’s Manhattan apartment and The Girl’s upstairs unit. Ansin also gets much of the right droll tone in Richard’s imaginary life.

Ansin and Calzadilla are credited in the program with adapting Axelrod’s script. Precisely what those changes are is not clear. But these are very inventive and iconoclastic artists who have brought their expressionistic sensibilities to the unbridled staging of the classics, such as freely rewriting Ibsen’s dialogue in Hedda Gabler into a contemporary vernacular.

In Itch, we’re guessing, one representative change is this: The play opens with a figure in half-light at the back of the set: It’s Marilyn Monroe striking sultry poses in the pleated white skirt-halter dress she wore in the film. But as she walks toward the audience, the eye pupils readjust and you realize that it’s actually a man dressed in the iconic outfit, with hairy legs and muscled arms distracting from a come hither shoulder roll. Very creative, but what that was meant to convey escaped us. It certainly put the audience on notice that they were in for a strange evening.

Luciano Stazzone’s score was one of the distracting elements in MTC’s Hedda Gabler this season. But he and a pre-recorded band significantly improve The Seven Year Itch experience by providing original music that comments on the fantasy scenes, such as providing a bubbly tune worthy of a 1950s sitcom to accompany Richard’s fantasy of home life scenes with his idyllic wife.

One Response to Don’t Scratch This Itch At MTC