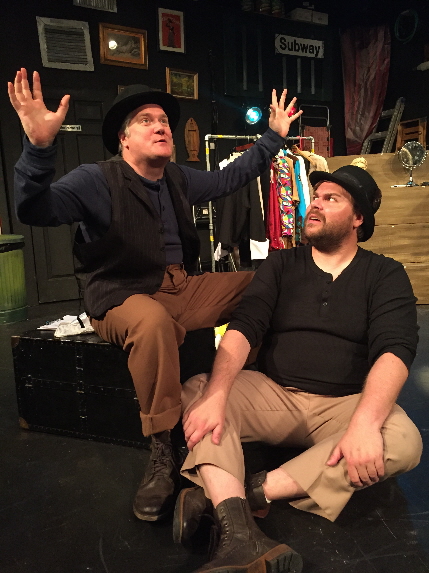 Sartre, Kierkegaard, Dostoyevsky, Nietzsche. Who among them knew that existentialism could be darn near hilarious? Who among them imagined a third-rate actor impersonating a feral gorilla performing snatches of Marlon Brando’s greatest hits between ferocious grunts?

In Thinking Cap Theatre’s Waiting For Waiting For Godot, the absurdity of life is moved from the center stage spotlight of Samuel Beckett’s play in progress to the dingy dark wings where two understudies are waiting in vain to go on.

But these two sad sack actors bantering about the nature of acting, theater and life itself are mirroring precisely what is happening on the other side of the curtains where the “real” actors are holding forth. What can be more ephemeral at the mercy of mortality than live theatrical performance?

Hanson’s script, a success at the New York Fringe Festival in 2013, is endlessly clever with a score-and-a-half direct references to the original play from the first line (and oft repeated here), “Nothing to be done,” and all the way to the finale that mirrors Beckett’s script– until the final crucial moments.

In those moments, Hanson and company find a kind of answer to Beckett’s bleak vision for our heroes and ourselves, but we won’t spoil it for you.

You don’t have to know the play very well, if at all, to enjoy this production, but the more you do, the more ingenious you will find it, down to the ongoing disagreement on how to pronounce Godot. But it also serves as an accessible gentle ribbing and fond celebration of acting, theater and art.

As this play opens, Ester (Wilson) and Val (Duncan) are killing time offstage while we hear a modest production of Beckett unfolding on the other side of a velvet curtain. They are a couple of fleshy nebbishes; Ester is more bluster and egotistical, and Val more bewildered and adrift.

Bluster and bewildered, sounds like a comedy team – Abbott and Costello, Laurel and Hardy, which is quite apt. (There are several passages of word play that sound like the “Who’s On First” routine). They chit chat endlessly about whether the unseen Director who never appears (sound familiar?) will ever give them a chance to do what gives them purpose – a chance to go on stage. Ester is full of false bravado and pretends to be the more experienced, holding forth on the glories and difficulties of their profession to the more reserved naïf Val.

But it’s all show. When Ester worries with overdone angst about his reputation, Val asks with genuine confusion, “What reputation?” What makes it twice as funny is how sincerely Val asks the question. That’s indicative of what makes the show work so well.

Because just as Beckett’s Vladimir and Estragon are most successfully played as clowns by skilled comedians, Thinking Cap and Ledford have hired two similarly gifted actors in Wilson and Duncan. They seamlessly meld comic and dramatic chops in intricately crafted moment-by-moment performances, all of it molded by Ledford.

Ledford also has the characters and performers work up a sweat with considerable movement and slapstick tropes, climbing up a ladder to declaim, wrestling around the floor, struggling to don a frustratingly twisted vest, on and on.

Wilson, who was mesmerizing as the tent revival preacher in Thinking Cap’s Church last season, embodies Ester’s overblown ego barely disguising an eternal battle to maintain his sense of self-worth when everything in the world conspires to deflate it. His gorilla/Brando act, which ends with a tableau from King Kong, is the standout take-away memory of the evening as he unintentionally satirizes all the self-important blather that so many theater practitioners indulge in. His Ester is both hilarious and pitiful at the same time as his eyes dart all over the place trying to spot another sling-and-arrow in the offing while still hopeful for a laurel.

His is the flashiest of the two performances, but Duncan is step for step just as fine in the quieter role of the earnest Val. He seemingly channels Stan Laurel, creating a self-effacing, good-hearted guy who is nearly in awe of Ester’s seeming self-confidence and “experience.” His shy smile and his confused eyes are applied expertly to provide silent commentary on Ester’s ravings. And watch his for his terpsichorean break.

Their interplay is so natural and comical that civilians will not realize how every few seconds has been choreographed and polished.

Which brings us to the crucial third corner of the triumvirate. Frequently, we praise an actor who is so good at submerging his considerable craft that we don’t “catch him acting.” But this is just as true, perhaps more so, of Ledford who is simply one of the best directors in the region, proven over and over from Naked Stage’s The Turn of the Screw to Mosaic’s Collected Stories. Ledford is so skilled that we don’t “catch her directing” despite a surfeit of inventive staging, precise pacing and an ability to get these performances from her cast. She may be better known for helming dramas like The Unseen, but her years at Summer Shorts are evident here in the boatloads of comic business and impeccable timing she has developed with her cast members.

And a nod to Elise, who was so funny as the maid in Zoetic Stage’s Clark Gable Slept Here. She plays a hyper-efficient assistant stage manager who is singularly unimpressed with the acting profession, which she claims (and demonstrates) isn’t so hard.

The tech team is also bringing their A game. Eric Nelson’s lighting design is unusually fluid for a small venue and makes its own comic comments on the action. Scenic artist and set dresser Alyiece Moretto has created a classic environment featuring the hodgepodge detritus of the current and past productions (including, appropriately, cowgirl costumes left over from Thinking Cap’s recent Always…Patsy Cline and the Mr. Peanut outfit from its Book of Liz). She has scattered ladders and steps across the stage to give Ledford opportunities to keep the two men from being on the same level all night. When the actors begin to practice the play, they commandeer an empty coat tree to stand in for the denuded sapling in the actual play.

While the execution is crucial, Hanson’s script itself is a hoot especially for theater lovers with jabs as the “Miserly Technique” of acting, and the scripts written by the mispronounced Ma-may, which are a short course in the “the art of swearing.”

The play is jammed with wry references. At one point, one actor says to the other, “This is a very difficult show to do; nobody knows what it means.” This, of course, is comic understatement. In fact, when comedian Bert Lahr appeared in the first U.S. production, he acknowledged that he really had no idea what was going on. The director of the first English language production in 1955 in told the cast, “I haven’t really the foggiest idea what some of it means, . . . But if we stop and discuss every line, we’ll never open.”go on.

That 1956 American premiere at the Coconut Grove Playhouse was famous for sending Miami audiences into the night completely befuddled. Among the many critics sent in from New York, legend has it that one wrote that he had no idea what he had seen, only that it had been something great.

With Waiting For Waiting For Godot, you do know what you’ve seen: an entertaining night out that also makes you think.

Waiting For Waiting For Godot runs through Sept. 13 from Thinking Cap Theatre performing at The Vanguard Sanctuary for the Arts, 1501 S. Andrews Ave., Fort Lauderdale, on the west side of the street across from Broward Health Center. Performances 8 p.m. Thursday-Saturday, 5 p.m. Sunday. Runs about 1 hour 40 minutes with one intermission. Tickets $35. Visit www.vanguardarts.org, thinkingcaptheatre.com or by phone at (813) 220-1546.