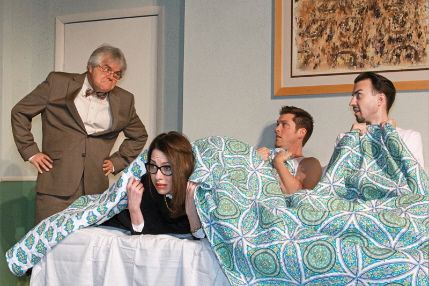 Allan Baker can’t quite figure out what is going in in a motel bed among Katherine Amadeo, Chris Crawford and Cliff Burgess in Unnecessary Farce / Photo by Alberto Romeu

Those preparing to see the show at Actors Playhouse, be advised: There’s a six-foot-plus-tall hitman dressed in full Highland garb and speaking in an unintelligble Scottish brogue. There’s an ineffectual young policewoman who carries a water pistol because she’s not trusted with actual firearms. There’s the lovely accountant who ends up half-naked in front of strangers – repeatedly. And most important, there are eight doors.

The doors, which will open and slam like percussion, are crucial, of course, because this show is courageously entitled, Unnecessary Farce.

The quality of the light summer shows at the Playhouse are famously variable, but director David Arisco long ago proved that with a solid cast like he has here and the right material, he can spin a hilarious evening of demented daffiness.

That’s because there are only a few directors in the region who can equal Arisco’s talent for precisely festooning a comedy with literally hundreds of comic bits of business from double takes to a character getting tangled up in a long phone cord to ensuring that his cast delivers exactly the right timing and top spin to a droll line.

And it’s him, no doubt. He has applied here that same affinity that he did to a much lamer script for 2013’s Fox on the Fairway, which he and his team turned into a lighthearted lark. Here, he has Paul Slade Smith’s far better blueprint that has never been produced on Broadway – no flying witches or foul-mouthed puppets — but which has 36 productions slated this calendar year alone around the country and has had at least 165 mountings since 2006. It’s full of skillful word play, especially banter as the cops in one room and the suspects in the other seemingly answer each other in perfectly woven banter.

The result is such an undeniably funny evening that even the cast opening night was battling not to crack up on stage. To be fair, while Arisco has paced it all like a Swiss timepiece, the script does seem to run a bit long, especially in the first act. And some of the doings push the edge of the credibility envelope even for a light farce, but by that time things are moving too quickly for you to do much questioning.

The play occurs in adjoining economy motel rooms (drolly designed as mirror images by Gene Seyffer) where inept police officers Eric (Chris Crawford) and Billie (Jessica Brooke Sanford) are laying out the recording equipment for a sting in the next room. As the tape record everything, the city’s new accountant Karen (Katherine Amadeo) will try to try to inveigle the fuddy-duddy mayor (Allan Baker) into admissions about missing funds. But the VCR will record a lot more than anyone wants to see saved for posterity.

Not only does the case not go as expected, it doesn’t take but a few minutes before everything starts spiraling out of control. Soon we meet Agent Frank (Cliff Burgess), a city hall security agent who is also an assistant to the aforementioned killer for organized crime (Jim Ballard), and even the mayor’s wife (Elizabeth Dimon).

To go into too many plot developments would spoil some of the silliness, but this is farce, so rest assured that sexual urges and misadventures play a major role in the ensuing foolishness. The lovelorn Eric and Karen instantly succumb to each other’s charms, and few characters stay completely dressed for long. Karen, embarrassed at ending up once again in her underwear, bemoans, “I work at an accounting firm. We don’t even have casual Fridays.”

As fine as Arisco’s work is, he’d tell you that you need a deft cast to pull this off. He has gathered an inspired group of clowns who throw themselves into the madness with complete abandon and who bring their own bag of tricks to the assignment. What is especially impressive is that while all have acted in many genres of theater, some are not well-known for their comic chops.

Top of the list is Crawford who played the regal Richard in Palm Beach Dramaworks’ The Lion in Winter and the Carbonell-winning role as the sensual lover in Actors Playhouse’s musical Murder Ballad. Not a trace of those fellas are evident in his hapless, frazzled hero who pulls on his pants backwards, the classic paradigm of an Everyman coping on the fly with impossible-to-have-predicted circumstances. At one point, Eric responds to a bad guy pointing a gun at him by pointing his finger in return as if it is a deadly weapon. Crawford says with desperation, “You put away the gun, I‘ll put away the finger.”

Although barely a college graduate, Sanford has had the lead in Bonnie & Clyde, played the title character’s friend in Carrie and won acclaim as the disaffected teenager in Fear Up Harsh. Once again, her Billie is a lovable naif way, way out of her depth in this sting and desperately trying to deal with the insanity in the next room. It turns out that when the killer gets his blood lust on, his Scotts becomes gibberish. Somehow she can understand him and when he gives a very long diatribe about his plans to kill her, she has to translate for the others in the room. Her woebegone delivery earned Sanford a mid-show ovation from the audience.

Amadeo’s resume features No Exit, Cabaret, Miss Julie and 4:48 Psychosis. But her comic chops get a workout here. She is every inch a delightful goofball as the other two.

Ballard has performed in Spamalot, but he’s best known for his handsome assured leading men from Doubt to Les Liaisons Dangereuses. His Scots-spouting killer, whose forehead never met a door he couldn’t run into and who plays the bagpipes before killing a target, is a solid hoot.

But the entire cast is first-rate as they race in and out of the slamming doors, waving around firearms and wearing various articles of plaid clothing.

Unnecessary Farce (the title’s reference is, indeed, a wait-for-it-surprise) is an unapologetic mindless but well-executed evening of zaniness.