Dramaworks’ 110 In The Shade Is Straight From The Heart 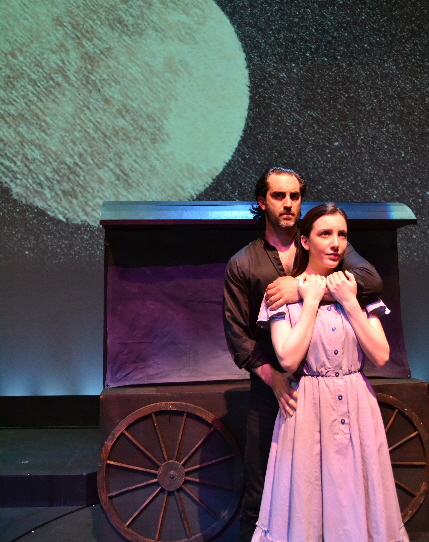 The modern musical has its glories, but none unabashedly embrace pure feeling in quite the way Tom Jones and Harvey Schmidt did in the 1960s.

So be thankful for Palm Beach Dramaworks’ ongoing summer “concert” series reviving classic and not-as-well-known musicals, and in this instance, its courageous celebration of heartfelt sentiment as opposed to cheap sentimentality in 110 In The Shade.

The salvation of true love, love of one’s self-worth and inner beauty, love of family, love of community, love of someone special, love unlike anything pallidly imitated on a Hallmark card or Movie of the Week, all this lies at the core of director Clive Cholerton and the fine cast’s moving resurrection of this gem from 1963.

Based on N. Richard Nash’s play and later film The Rainmaker, it tells of the spinster Lizzie living on a Texas cattle ranch in the 1930s in a small town staggering in the midst of a killer drought. A charismatic conman Starbuck appears, promising to bring rain. While he reawakens the town’s inner spirit, the real story is how he ends Lizzie’s emotional drought by making her see the loveliness inside her.

It’s difficult to overstate or explain to a younger audience just how precious and rare is the straight-ahead theatrical delivery of the glories of hope, the pain of loneliness, the strength of family bonds, the almost biological need for nourishing dreams, the unbridled joy of romance, and a half-dozen other verities. We feel them just as pungently today, but rarely speak about them with such unblinking honesty. It brings tears while watching it, thinking of what we as a society have lost in our unwillingness to fully feel under the layers of cynicism and other protections we have layered on.

The characters in 110 In The Shade are not fools or yokels or one-celled caricatures as drawn by Jones and Schmidt who are native Texans. The town’s sheriff File tells people that his wife has died when the town knows she ran off – but they have silently agreed not to challenge his fiction because they care about him enough to let him preserve his dignity. Lizzie’s hard-edged practical brother Noah hates the pain he is causing when he tells her that she will always be an old maid. Her father H.C. doesn’t interfere when Lizzie spends the night with Starbuck in what he knows is a transient tryst because he wants her to have one ray of romance to carry through her life. 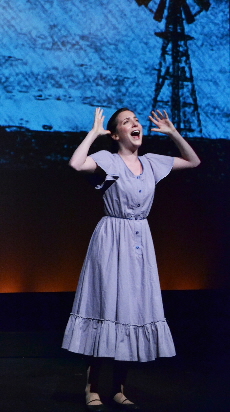 The Dramaworks team embrace this whole-heartedly. In particular, Jessica Hershberg as Lizzie inhabits a woman afraid she will never be loved, who has started to don that protective armor, but who still desperately needs that ardor far more than the town needs rain. Her expressive soprano lets Lizzie’s emotions pour out past her wicked self-deprecating wit. But Hershberg’s luminous face is like a video monitor of the passions raging inside Lizzie: flickers of fear of embarrassment, the terror of being forever rejected and lonely, the ecstatic joy of finally seeing worth in herself and then in being appreciated by someone else.

But this is applicable to some degree to every actor, dancer, musician and designer whose work is seen or heard on this stage.

A word about the idea of these being concerts or staged readings or whatever the right term is. Dramaworks’ summer musical productions, especially those led by Cholerton, feel fully-fleshed out. With two weeks of rehearsal (and likely a lot of work at home before rehearsals start), most of the cast barely need their scripts and scores at all, and in the many scenes and dance numbers, the music stands are abandoned. While few performances are as multi-layered as another week of rehearsal might yield, all of them are as vibrant as you can ask.

One benefit of this kind of production is that it focuses the audience’s attention on the beauty of the words and music that sometimes get lost in a full-blown production.

Cholerton, who pioneered the concert musical locally when he was running the Caldwell Theatre, injects more life and movement in his staging than many full-out productions in the region. Characters often are in motion and the show flows smoothly without any halt. Even when actors occasionally stand near the music stands, nothing feels static in his staging. A sense of carefully applied craft and polish shines in what is a quick-and-dirty sprint when these are done in New York City’s Encores series.

As far as production values, yes, this is a bare bones budget-conscious undertaking but each designer has invested touches of inspiration. For instance, Linda C. Shorrock dresses everyone in the regulation black clothes in the first act, but note that the men’s shirts have Western yokes on them, and in the second act as the town comes alive, some people wear colorful tops or shirts.

Augmenting Cholerton’s kinetic staging is the considerable spirited choreography from Michelle Petrucci who has designed everything from Agnes de Mille-style balletic moves to line dancing hoe downs. It helps that Dramaworks has hired a corps of experienced dancer-singers capable of realizing her vision.

The cast is drawn from some of the best people in the region with a few New York ringers brought in.

Cooper Grodin, a frequent player on national tours, brings the requisite hunkiness to the linchpin role of the seductive spieler Starbuck. His voice is a tad thinner than the muscular tone the role begs for, plus no one will ever equal the charisma that Burt Lancaster brought to the role in the film. But Grodin with his deep set eyes and dark ale of a voice acquits himself well.

Shane Tanner, so fine as Jud in The Wick’s Oklahoma, invests File with the sense of a masculine but wounded soul. William Parry, the Sondheim veteran who starred in Dramawork’s Zorba last summer, is the sympathetic father. Nick Duckart returns home from the Big Apple to play Noah, giving him an underlying love for his family under a brusque pragmatic shell; Clay Cartland is the younger naïve big-hearted brother whose simplicity is a virtue not something to be mocked.

Stephanie White is the countrified coquette Snookie. The deep bench ensemble includes Matthew Korinko, who has played a dozen leads for Slow Burn Theatre company; Alex Jorth, one of the lead dancers for The Wick Theatre; Nikki Allred Boyd, who stepped in with no notice to play Cassie in Broward Stage Door’s A Chorus Line this season, and Lauren Bell, another Wick mainstay.

Unlike The Fantasticks, this was a big brassy David Merrick-produced show with the standard full-throated pit band. So it was right to worry whether a piano or two could make up for the loss of that musical heft. Not to fret. Musical director Howard Breitbart, who led Dramaworks’ The Most Happy Fella last summer, has assembled a quartet of skilled musicians and tweaked existing stripped-down arrangements that amazingly preserve the unique flavor of Schmidt’s score.

The layers and textures of the music – ranging from ballads to hoedowns – are adroitly woven together by Breitbart on piano, Christopher Glansdorp on cello, Phil McArthur who plays his violin like a fiddle, and Julie Jacobs on a wide variety of percussion including what probably were a xylophone and cowbells.

A special shout out to Richard Szczublewski’s sound design. The clarity and balance of voice and musicians are among the best heard anywhere this season. The performers’ enunciation obviously is involved, but I have played the original cast album scores of times and never heard some of the lyrics that Szczublewski laid clear.

The 1963 musical is based on Nash’s beautiful 1954 play (which features a two-person scene used in collegiate acting classes for decades) and which gave rise to an even better 1956 film with Lancaster and Katharine Hepburn and Lancaster, both of whom basically ruined any foolish attempt to do better in the parts from then on.

Nash, whose life as a playwright ran alongside his career as a book writer for musicals, expertly preserved the most affecting elements for the musical (although it might help to see the movie before you see the musical). Jones and Schmidt were riding high on the success of The Fantasticks, and while the score does have faint echoes of their past and future works, a big Broadway production was quite new to them. The show was admired and ran a full season, but it got lost in the runaway success of Hello Dolly! and Funny Girl.

Until 2007, the musical was nearly a forgotten work outside of show tune fans who knew it primarily from the original cast album, and most of those only because they loved the writers’ The Fantasticks and I Do, I Do. There was a limited 1992 revival that even fewer people recall and another in 2003 at the Signature Theatre outside Washington, D.C. Even the 2007 Roundabout revival faltered although it gave Audra MacDonald a plum role.

But Dramaworks and Cholerton have found the show’s center and proudly put it in the spotlight without hesitation or reservation: the human heart. 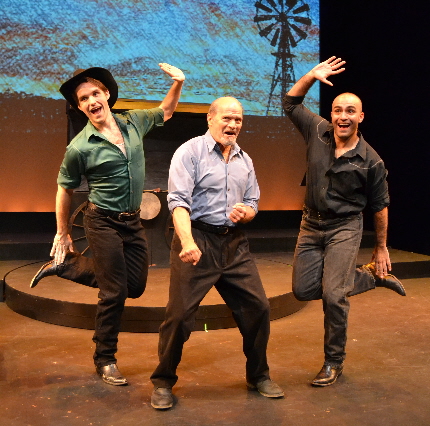