Dramaworks’ All My Sons is Triumphant Bow for New Space 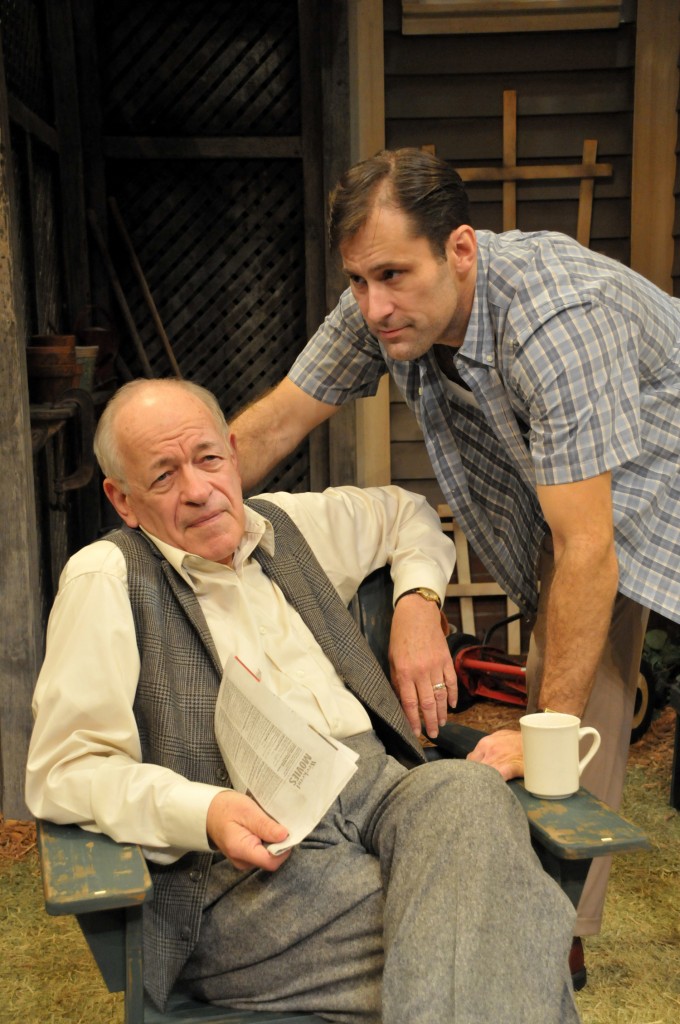 Palm Beach Dramaworks sure knows how to open a theater.

The company, formerly located in a tiny space on Banyan Street in downtown West Palm Beach, has moved to new digs around the corner at the edge of the waterfront on Clematis Street, downtown’s main drag. The old Cuillo Theatre has been renamed the Don & Ann Brown Theatre, after donors who believed so much in the theater company’s quality that they invested millions in their future. The venue has been renovated into a gleaming, streamlined theatre, elegant in its spareness. And even though the number of seats has nearly tripled, and the size of the stage has increased significantly, the company has managed to retain the intimacy of the Banyan Street space.

Such a theatre deserves a production with the scope and magnitude of All My Sons, Arthur Miller’s first Broadway hit.  Directed here by J. Barry Lewis, All My Sons is a family drama of epic proportions, dealing with the responsibility, honor and the ultimate cost of buying into the American Dream.

The story centers on the Keller family in small-town middle America the summer of 1947. Patriarch Joe Keller (Kenneth Tigar) is retired from running the factory he built. Son Chris Keller (Jim Ballard) has been home from the war for two years.  His brother Larry, a pilot, has been missing in action for three years.  While Joe and Chris believe that Larry is dead, matriarch Kate Keller (Elizabeth Dimon) still believes that Larry is alive and will one day return to his hopeful mother.

Ann Deever (Kersti Bryan), Larry’s sweetheart before the war, has arrived at the Keller 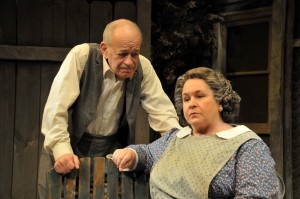 home.  Chris has invited her because he wants to marry her, even though he knows his mother will have a hard time with the prospect of Chris marrying “Larry’s girl” as she puts it.  But there is something else that bonds the Keller and Deever families together, a crime for which Ann’s father and Joe were both accused, but for which only Ann’s father is paying the price. When Ann’s brother George (Cliff Burgess) arrives at the Keller home, the tension boils to the surface, placing the Keller family on the brink of destruction.

All My Sons is a play that would have been impossible to produce in the old Palm Beach Dramaworks space. Not only is the cast of ten and the set requirements more that the old space could handle, the story, emotions and impact of the play are too big for the company’s former tiny venue.  Here in the new Don & Ann Brown Theatre, All My Sons has room to breathe, yet the emotional impact resonates even when watching the drama unfold from the last row.

The entire cast is marvelous, and without a single misstep. There’s an abundance in All My Sons that was characteristic in the heyday of theatre but is rarely seen today.  Several of the characters in All My Sons are minor and exist to create a sense of the community in which the Kellers exist, and to add one piece of vital information. These days, playwrights wouldn’t even think to write so many characters, and if they dared, the costs of producing such a play would limit its life. Budgets would dictate that characters rewritten and combined.

Tigar, a veteran TV and movie actor, delivers an astounding performance as Joe Keller, the flawed patriarch who refuses to take responsibility for his actions. At the start of the play, Joe is a congenial neighbor, a friend to the local children and an idol to his son. By the end, he’s a broken man. Tigar performs this devolution masterfully with an emotional and physical transformation he creates through his body language, posture and his expression.  It’s a stunning performance not to be missed.

Tigar is well-paired with Elizabeth Dimon, one of this region’s most reliable and interesting actresses. Dimon portrays Kate with resolute decisiveness –what she says goes in the Keller family.  But Dimon also finds the heartbreak in the character, as a mother both mourning the loss of her son while believing he’s still alive. It’s a beautiful, nuanced performance.

Ballard certainly looks the part of a young man trying to find his place in the world after experiencing the horrors of war.  Ballard plays Chris Keller as a man on the brink of life, torn between staying with what he knows and his desire to start fresh. His scenes with Tigar, when the son confronts his father with the older man’s failures, will push the audience to the edge of their seats.

Bryan plays Ann Deever, a woman whose arrival at the Keller house begins the family’s meltdown.  Bryan’s scenes with Ballard are sweet and hopeful –they’re like a small-town Romeo and Juliet complete with the star-crossed lovers tag.  Bryan mines the poignancy and complexity in Ann’s situation, and gives a beautifully crafted performance.

Cliff Burgess doesn’t get much stage time as George, but he’s riveting for the entire time, playing George as a powerful force of nature.

Michael Amico’s set  thoroughly captures the mood and nostalgia of mid-century small-town America. Amico was a master at creating awe-inducing sets in the old space, and he has outdone himself with the All My Sons set.  Amico now has expanse and depth to work with and his design — a two story house with a back porch, garage, and backyard — is breathtaking.

The set is enhanced by John D. Hall’s evocative lighting design, taking the Keller home from sunny morning to late at night while never forgetting the darkness that hangs over the family. The sound, by Rich Szczublewski, is clear and rich, and sounds natural, not overly amplified.

In the Banyan Street space, Palm Beach Dramaworks had only 84 seats to offer and often had to turn people away.  Now, although they have 218 seats available, fitting in everyone who wants to buy a ticket might still be a problem.  Because judging by this production of All My Sons, the new space has allowed Palm Beach Dramaworks to amp up the quality work they’ve always done, resulting in a production that should keep the house full every performance, and still leave some theatergoers wishing they had bought tickets earlier.