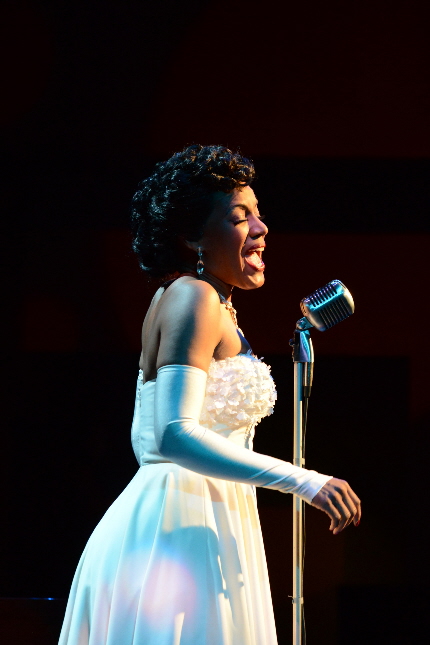 Veil after veil are slowly stripped away from the elegant sophisticated stage persona that is “Billie Holiday” until standing exposed is a blunted devastated victim of racism, sexism and abuse – some imposed and some self-inflicted — in Palm Beach Dramaworks’ incisive Lady Day at Emerson’s Bar and Grill.

Although the play occurs during a single club date, actress Tracey Conyer Lee and director J. Barry Lewis successfully chart Holiday’s disintegration over decades. They do this as each succeeding number and interstitial banter with the audience devolves, each echoing a particular state of mind in a chapter from her deteriorating life arc.

The play-with-music requires a singer who can recreate 16 of Holiday’s standards in her idiosyncratic but recognizable voice. But equally, it requires a skilled actress comfortable as a storyteller but who slowly reveals the ravaged soul. Lee, under Lewis’ practiced eye, is fully up to the task – entertaining one moment and deeply affecting the next.

Lanie Robertson’s 1986 play has been an invaluable tour de force opportunity for scores of African-American actresses. This is at least its fourth professional run in South Florida – in addition to a triumphant production in 2014 on Broadway for which Audra McDonald won her sixth Tony Award. The latter is memorialized in its entirety on a CD/MP3 recording.

For the musically deprived, Holiday was a seminal chanteuse/songwriter who fused Bessie Smith’s blues with the jazz sound evolving in the 30s and 40s exemplified by Lester Young among others. Her life was a compounding series of tragedies that she blunted with alcohol and drugs, as she circled toward oblivion.

The show recreates a gig at the titular south Philadelphia club in 1959 – shortly before her death at age 44 from from cirrhosis of the liver – after she had been banned from performing in New York City, ostensibly because of a felony drug conviction.

In this production, Lee enters the club a bit buzzed; it’s not anything out-of-control but her pianist Jimmy Powers (the superb Brian P. Whitted) and bassist Phil McArthur) know the signs from five months of touring with her.

In these early scenes, Lee/Holiday is a dazzling beauty – tall, cool, her hair carefully coifed, dressed in a strapless white cocktail dress accented with chic necklace and earrings, all speaking of grace and style.

She immediately sings “I Wonder Where Our Love Has Gone” with a stunning command of martini smooth phrasing and exuding a confidence that we will see is missing in every other part of her life. In fact, as she talks to the audience as if they are long lost friends, the veneer begins to show hairline fractures.

During the evening, each recollection drives her deeper into despondency and liquor. She says she knows the audience has come to hear her greatest hits, but she delays launching into them saying she can’t do them until she feels it. So it’s a reverie about her complicated relationship with her mother that enables her to let loose with a riveting “God Bless The Child” drawn from her marrow.

Similarly, when Holiday relates how she was forbidden to use a toilet in a club, she tells it with self-effacing “it-ain’t-nothing” humor. But recollection of that humiliation leads to her excoriating classic ballad about Southern lynchings, “Strange Fruit,” and it drives her offstage to inject a strong dose of a “moonlight.”

After that, she careens back in the room, grasping her dog, and one of her fingerless silk formal gloves pulled down where the injection went in. From there, everything spirals down the sewer.

Lee and Lewis made fascinating choices that distinguish this effort. Several actresses have let Holiday slide quickly down the cesspool and end in a mire of morass. But Lee’s Holiday, while clearly falling apart, doesn’t indulge in arm-swinging histrionics signifying her dissolution. Subtle things are judiciously used: a few missed notes, a slightly rougher tone, a few slurred words, scratching her arm once or twice, but never overdoing it.

But the seeds of dissolution are always there. When Lee enters the club, Lee’s face has a look of uncertainty and anxiety just barely discernable, as if she’s not totally sure where she is or what she is supposed to do. When she does realize, gratitude suffuses Lee’s face to be “home.”

Lee’s Holiday is by turns, mercurial, grief-stricken and willing to laugh at herself, her audience and the cruelties of fate and man-made sorrow without any self-pity. Local audiences might remember Lee as one of the five women in Florida Stage’s musical Constant Star or the play Permanent Collection.

Lewis is best known for difficult, intellectual dramatic assignments such as his breathtaking production of Buried Child at Dramaworks last month. But he has helmed small musicals before and he deftly stages this play-with-music in which the numbers comment on the patter before it and Holiday’s life itself. Perhaps the best moment comes in the final 30 seconds which I won’t spoil here. But I can’t recall any of the earlier productions ending the play with quite the imaginative and ineffably beautiful and tragic way that it ends here.

Whitted, who doubles as the musical director, deserves considerable credit both as a nimble accompanist and for helping Lee resurrect Holiday’s sound.

One reason the play is done so often is that it’s economical: one very simple setting, three actors, 90 minutes, one major costume. But Dramaworks doesn’t ever skimp. Jeff Cowie’s closely observed set evokes the period, from the exploding atom chandeliers to the full bar waiting to serve customers. Kirk Bookman’s fluid lighting is rarely noticed but changes the sense of place many times. Leslye Menhouse has created the gorgeous gown. The crucial sound quality is due to Richard Szczublewski. Again, no one should notice, but I suspect the stand microphone Holiday’s uses is a dead prop. So when the tenor of the sound changes from Holiday’s informal speaking to the audience and when she is singing full out “into a microphone,” that’s all Szczublewski’s design.

For the curious: Carey Hart played Billie in 2000 at the Vinette Carroll Theatre in Fort Lauderdale, Nadeen Holloway played her in 2005 at the M Ensemble in Miami and Paulette Dozier played her in 2012 for Boca Raton Theatre Guild.

Lady Day at Emerson’s Bar and Grill runs through June 7 at Palm Beach Dramaworks, 201 Clematis Street. Performances are 8 p.m. Wednesday-Saturday, 7 p.m. on some Sundays; 2 p.m. Wednesday, Saturday and Sunday at 2 p.m. Wednesday matinees and Sunday evenings include a post-performance discussion. Runs 90 minutes including no intermission. Tickets are $62, student tickets are available for $10, tickets for educators are half price with proper ID. Call (561) 514-4042, or visit www.palmbeachdramaworks.org.