DreamCatcher’s Uneven Into The Woods Thrills And Disappoints 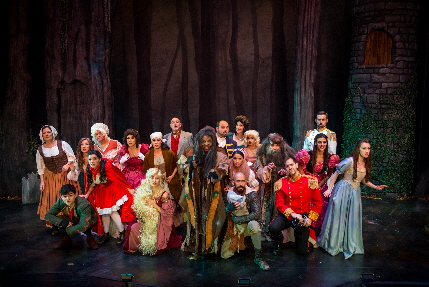 The new local production of Into The Woods by DreamCatcher Theatre and Theatre Up Close is so heartbreakingly uneven that it may bring Stephen Sondheim lovers close to tears. Long stretches are so skillfully and lovingly executed that you want to stand and cheer. Other passages fail to conquer this deceptively difficult work.

But the crippling misstep is the high-profile casting of Tituss Burgess in the linchpin role of the Witch — not because of the gender-blind element, but because it simply seems to be outside the reach of his considerable gifts.

This full-fledged production is the first creation of DreamCatcher co-founders J.J. and Natalie Caruncho, a brother and sister raised in Miami but currently making their living in New York City and on the road.

It’s a brave ambitious undertaking for a first production with the Arsht Center’s initiative to develop local companies. The Sondheim-James Lapine musical may be among their most frequently performed work, but it is devilishly complex and multi-layered. Certainly, DreamCatcher has spared no expense with 20 talented local and New York-based actors, a letter-perfect 11-piece orchestra plus evocative costumes, sets and lights.

When it all coalesces, it’s a delight, such as most of the 13-minute opening number in which the cast deftly and crisply limns a volume of fairy tale characters interacting in an intricate web of music and lyrics.

Equally exciting is listening to such assured solid performers as the lovely Arielle Jacobs (of Broadway’s Into The Heights) as the Baker’s Wife singing about the lessons she has learned during a dalliance with a prince in “Moments In The Woods.” Savor Annemarie Rosano as Cinderella realizing that her decision is not decide as Cinderella flees the Prince “On the Steps Of The Palace.” Or enjoy the adolescent certitude of determined Magan Dee Yantko as Little Red Riding Hood celebrating new found knowledge after her run-in with a carnivorous Wolf. Or Carbonell nominee Bruno Vida (next to normal) enthusiastically describing Jack the Giant Killer’s adventures in the clouds.

They, along with most of the cast, have strong stage voices that clearly enunciate Sondheim’s tongue twisting lyrics and revel in his score.

But director Justin Fortunato has far more trouble clearly telling the story. Part of this is because Lapine wove so many stories together and then shoved them past the audience at a rapid clip. Key developments fly by in half-lines of dialogue or a lyric. A triumph of the recent film was the clarity for first time visitors to the woods. But that doesn’t occur here even though Fortunato, a theatrical stalwart in Pittsburgh, has directed the show before.

The trick to making those storytelling elements land is to impose a narrative breather to allow the audience to absorb events or at least to underscore them with stagecraft. Not only does the audience get lost, but so does most of the thematic resonances about the consequences of actions, the pain of parenthood, children struggling to get past parents’ failings, the virtues and vices of community dynamics, and the complexity of real life.

While a lot of money has been spent here, a few moments feel cheaped out. For instance, when the Witch makes her last disappearance in what should be a puff of magic smoke, at least; this production simply turns out the lights and lets her walk off stage.

But the serious problem here is the casting of Burgess in a role nailed by Bernadette Peters, Vanessa Williams and Meryl Streep among many others. From all Facebook accounts, Burgess is a lovely person; J.J. Caruncho rates him as one of the best musical theater actors today; Burgess has won acclaim for such shows as The Little Mermaid, and his long-held desire to do the role was one of several reasons the Carunchos cited for choosing to produce Into The Woods.

But in the first act, Burgess’ performance as the old hag — hidden under a robe of rags, a wig of steel wool dreads and a half-mask from Party City – seems half-hearted.

Then, liberated from the disguise in the second act to be revealed as a gorgeous fashion plate, Burgess isn’t playing a woman, he’s playing a bald gay man wearing a dress. Even if you buy that distracting interpretation, it’s a tamped down listless performance in which he sits down a lot.

And, worst of all, much of the score seems simply not in his register, or at least his falsetto cannot negotiate the challenging music. Some of the loveliest songs such as ultra-poignant “Children Will Listen” or the powerhouse “Last Midnight” are just difficult to listen to.

Veteran Florida actress Laura Hodos, who plays Cinderella’s stepmother, is scheduled to step in as the Witch for several performances. Based on her past performances in the region, the level of the entire show likely will be elevated when she appears. It’s not that Burgess isn’t an accomplished actor, but unless we just caught him on a bad night, this role is way outside his range. Even Kenneth Branagh would make a miserable Lady Macbeth.

J.J. Caruncho also plays the Baker, a central character invented by Lapine. With piercing eyes, a genial smile, shaved head and an isosceles triangle of a beard, he cuts a memorable figure and provides affable company. But he does not exude enough innate charisma to establish him in the first act as the unofficial center of the story. When the score is in his range, he does justice to the music. But in his two best songs, “No More” and “No One Is Alone,” he substitutes words spoken in anger or passion for sung notes. Once again, this robs the audience of two of the most moving melodies in the show.

But the rest of the cast is unassailable, especially Wayne LeGette as the Narrator/Mysterious Man, Laura Turnbull as Jack’s put-upon mother and Marina Perez as trilling Rapunzel. In the hilarious one-upmanship of dueling laments, Justin John Moniz is Cinderella’s Prince (and Red Riding Hood’s Wolf), and Matthew Janisse is Rapunzel’s Prince.

Music Director Robert Neumeyer, a colleague of Fortunato, led the cast in learning the jigsaw puzzle of a score, but the orchestra was led by Ron Castonguay.

The woods designed by April Soroko are an appropriately intimidating environment complete with a 15-foot tower for Rapunzel. They are adequately lit by Bryan Kaschube but it drives you crazy to see someone snap on a blinding spotlight every time a character gets ready to sing. At least, someone could bring it up subtly. The costumes were designed by Alberto Arroyo.

Into The Woods runs through Feb. 15 at the Ziff Ballet Opera House at the Adrienne Arsht Center for the Performing Arts, 1300 Biscayne Blvd., Miami, a co-production of the Arsht Theater Close Up series and DreamCatcher Theatre. Performances are 7:30 p.m. Wednesday-Saturday; 2 p.m. Saturday-Sunday. Tickets are $50.  Running time 2 hours 45 minutes including one intermission. For more information, call (305) 949-6722or visit arshtcenter.org.