Driving Miss Daisy Is Competent Road Trip But Not Exciting

Posted on February 4, 2017 by Bill Hirschman 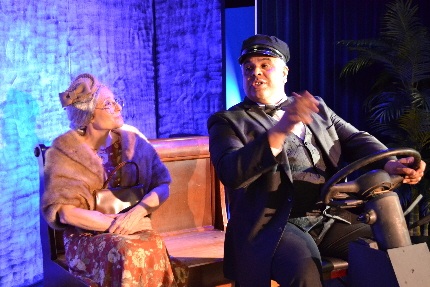 Like Steel Magnolias, the lovely insightful Driving Miss Daisy has such a solid Pulitzer-winning script that whatever else you may think of its restrained Southern sentiment, it’s pretty difficult to mess up.

Chicken Coop Theatre’s professional production at the Levis JCC is hardly among the most incisive nuanced editions you’ve seen of this oft-mounted warhorse, but the play itself is so well-constructed and the performances here are earnest enough that audiences still will be entertained if not deeply moved.

The truth is that as good as Alfred Uhry’s script is, it takes performers with that God-given charisma as well as an unusually high-degree of skill to make this work reach the levels that it is capable of. This troupe is just your average group of workmanlike performers whose experience seems limited to amateur theater and small regional professional companies. They have nothing to be ashamed of, but they aren’t as skilled as their predecessors in the parts.

So the result is a decent evening of theater with several chuckles and a couple of fleeting touching moments.

The 1987 play tracks the relationship between Daisy Wertham, a Jewish upper-middle class lady living in Atlanta in 1948, and Hoke Colburn, an African-
American hired to drive her because at 72, she can no longer avoid accidents.

In the beginning, Daisy is a crusty sharp-tongued curmudgeon chafing at this incursion of her hard-won independence as a teacher. Hoke, who is only perhaps a decade younger, is just trying to find a steady job at a time when few people are hiring blacks and then only younger men. His sharp mind is canny enough to balance his inner pride with the politely servile manner expected of African-Americans at the time.

But over the 25 years documented in episodic vignettes, their demeanors change as they let down their guard and breach the racial divide.

The inspired subtlety of Uhry’s script is that the tumultuous social change around them is only referenced in one scene, but the audience is expected to imbue every moment with the knowledge of the racism and anti-Semitism that ruled these decades. Further, while the two warm to each other, this isn’t a Lifetime TV movie: they were and remain complex difficult people hampered by pride and social mores. At one point, Daisy is aghast that she is accused of being prejudiced when, in fact, she subconsciously still is constrained by socially-ingrained discrimination.

What actors Ellen Murray and Geoffrey Short succeed at, guided by director Alan Nash, is credibly charting and depicting in successive scenes the subtle changes in age and attitudes.

Murray’s flinty Daisy with pursed lips and sharp bark somehow convincing melts a few millimeters at a time. Similarly, Short’s tall broad-shouldered Hoke indicates that the hidden intelligence and pride finally emerges as time wears on. In one of the more affecting scenes, Short quietly relates a childhood memory of seeing a friend’s father after he had been lynched. Chicken Coop Artistic Director Tony Rein plays Daisy’s son Boolie.

Chicken Coop deals with a very limited budget, so it should be complimented for renting a platform that rotates so that the chairs and steering wheel arrangement used to represent the family cars seems to turn corners and keeps the visuals from seeming static.