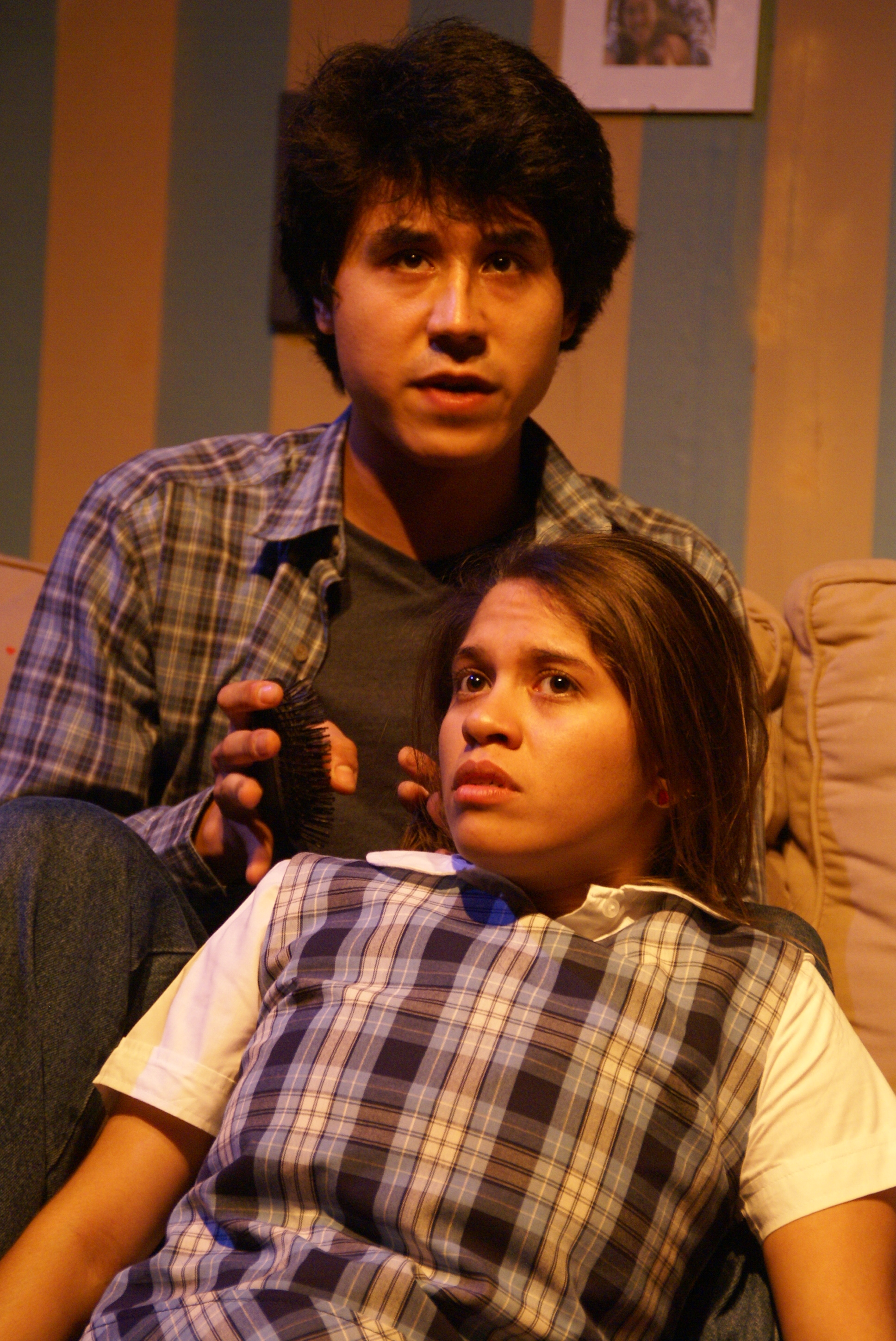 “If I’m never tied to anything, I’ll never be free.”
–Stephen Schwartz’s Pippin

The idealized nuclear family is nowhere to be seen in New Theatre’s Edith Can Shoot Things and Hit Them, but playwright A. Rey Pamatmat has put in its place an ad hoc substitute as strong and supportive as it is bizarre.

Edith fends off justifiably perceived dangers by marching around the property with the pouty determination of a callow pre-teen – plus a BB rifle and toy bow-and-arrow.

Pamatmat’s quirky play gets an equally quirky production under Ricky J. Martinez’s direction, which mixes laughter and pathos. The writing and acting feel a bit forced and clichéd in spots. But most of the time, Edith is a provocative, even moving vision of the challenges of surviving modern adolescence in what seems a hostile adult world.

The play’s major strength is its depiction of teenagers’ push-pull search for autonomy: They strain for hands-off independence to enable their search for self-worth and discovery of who they are, but they secretly fear the limitations of their inexperience. They yearn for sovereignty while terrified of their vulnerability when there’s no one to catch them.

We initially discover Kenny and Edith long abandoned by their father (no mother is in sight) who intermittently remembers to put a check in their bank. Disaffected by the father’s rejection, the fiercely protective pair creates elaborate deceptions for the outside world to keep from being separated.

Complicating matters is that Kenny is exploring his burgeoning homosexuality in the barn with Benji. The accompanying dialogue and developments come across a bit ham-handed and hackneyed, yet one could argue that’s exactly how 16-year-olds in a rural backwater would fumble. You also could argue that Pamatmat and Martinez have taken every single opportunity to depict the two boys kissing. But the real misstep is that Benji is written and portrayed as a cartoonish hunched-over nerd who could be the poster boy for an anti-bullying campaign.

The trio’s tenuous Eden is severely endangered when the adult world intrudes, threatening to rip apart a Neverland that could never be sustained. The rest of the play turns on the three discovering the stirrings of their own maturity and beginning to come into their own lives.

Natasha Waisfeld’s performance as Edith is the kind audiences should paste in their memories for future reference. Although she is a New World graduate with a BFA degree, she and Martinez have constructed a completely convincing 12-year-old whose traumatic life experiences have made her wary way beyond her years, even though she still confers at length with her oversized frog doll.

Waisfeld seemingly wears a sign warning “Approach At Your Own Risk.” She stomps her feet in frustration when Edith doesn’t get her way, yet closes ranks with her brother like a solider when need be. The actress rolls the word mayonnaise around in her mouth, fascinated by the sounds like an infant playing with a new toy. Yet she is aware enough to know when her brother is telling her fairy tales to cushion the truth. Her Dennis-the-Menace tomboy is by turns petulant, compassionate, patient, flighty, imaginative, naïve, all intense emotion cloaked by a feigned indifference. This is all in the script, but Waisfeld’s naturalistic characterization jammed with idiosyncrasies is impossibly credible a majority of the time.

Juan Gonzalez Machain also is convincing as the brainy brother who has the mental equipment to solve nearly any problem, but who is so crippled by the hidden family baggage that he feels overwhelmed by the losing struggle to protect them. On the occasions when Kenny loses his temper or falls apart in the play, Machain shows he has acting range and power, but he’s unable to slip in and out of those modes convincingly.

John Robert Warren has the toughest role as Benji because Pamatmat has saddled him with a stereotypical gay teen down to the hunched shoulders and backpack clutched to his chest, alternately terrified of his sexuality and yet consumed with lust. It’s only when Benji begins to grow as a person in the second act that Warren builds a believable character.

The New Theatre production is the second outing of the script after its bow in March at the Humana Festival in Louisville. It’s part of the National New Play Network’s “rolling world premiere” series, which guarantees a selected playwright at least three or more productions within a year to allow the writer repeated opportunities to fine tune the work.

In related news, New Theatre will decide very soon whether this will be the last show in its longtime home on Laguna Street in Coral Gables. It depends on when its landlord actually plans to tear down all the buildings on the block.

The theater’s board of directors is slated to meet soon to weigh three possible locations and scenarios to host the rest of its season – and possibly beyond, Martinez said.

This entry was posted in Performances, Reviews and tagged A. Rey Pamamat, Edith Can Shoot Things and Hit Them, Natasha Waisfeld, New Theatre, Ricky J. Martinez. Bookmark the permalink.