End Of The Rainbow Focuses On Judy Garland’s Disintegration 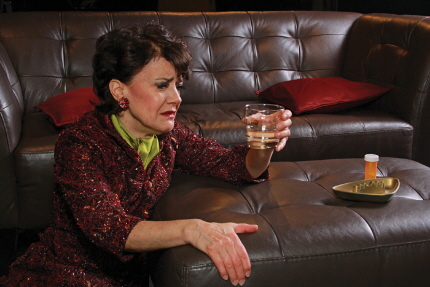 Kathy St. George as Judy Garland in Actors’ Playhouse’s production of End of the Rainbow / Photo by Alberto Romeu

To avoid disappointment, understand that End Of The Rainbow is not a Judy Garland tribute concert or a drag revue – it’s a dramatic play with music about her death spiral entering its final turn.

Actors Playhouse’s production of Peter Quilter’s script is shot through with witty gallows humor and compassion for a wounded soul. Most of all, it has a marvel-inducing tour-de-force by Kathy St. George under David Arisco’s direction.

Even with renditions of Garland’s signature tunes and reproducing the icon’s mannerisms, St. George doesn’t convincingly channel Garland. But St. George’s portrayal of someone resembling Garland in Garland’s dramatic circumstances remains engrossing from an entertainment standpoint, touching from a dramatic standpoint and fascinating from a voyeuristic train wreck standpoint, all on its own terms.

Quilter’s unsparing script, which bowed in Australia in 2005, toured the world and landed on Broadway in 2012 with star Tracie Bennett, traces Garland’s last comeback in a five-week stand in a London night club in December 1968.

Freshly dried out due to the ministrations of her young manager and soon-to-be husband number five, Mickey Deans, Garland seems primed to take on the world even though her health is failing, her discipline is non-existent and her finances are in a desperate state. But she still has that talent, that skill and that shark-like drive.

This Judy is quick-witted, randy, sparkling, profane, good-humored in a fatalistic way, not just charming but long accustomed to using that charm to get what she wants. She tosses off witticisms like, “Whenever I drink water, I always feel I’m missing something.”

But that lasts about 24 hours. As the run-up to her opening night approaches, she begins to become more desperate for Ritalin or liquor or anything. Fueled with desperation, she masterfully invokes well-practiced ploys to manipulate anyone who loves her. She harasses Deans for booze and pills just to be able get through the first few performances. Temporarily rebuffed, she tells Deans and her adoring accompanist Anthony, “I’ve been stepping around guys like you for years.”

Once Deans relents, she falls apart, a deterioration charted through scenes at her concerts in which she can’t focus on which song she is performing and even struggles with the microphone cord. Even when she nails the concert, she’s all the more used up.  She’s told, “You tore the roof off,” to which she responds, “I have nothing left to give.”

Deans walks out on her, temporarily, at the end of the first act, leaving St. George to crumble and then sing an emotion-choked “The Man That Got Away.”

All of this is observed by Anthony, who is contemptuous of Deans’ protestations that he only wants to protect her. Both men revere her and both are bitchily jealous of the other. The manager accuses the pianist of being one of those gay devotees who enabled Garland’s self-immolation by celebrating, encouraging and wallowing in her pain. The pianist accuses the manager of being one of those users who will not stick around for the long run.

By the time, Garland closes Quilter’s play with guess what song, she is a quivering mass of failure yearning for a peaceful past that she knows never existed.

Although her descent is written episodically, St. George and Arisco make the downward arc quite plausible, perhaps because early on they plant subtle clues to her instability that they know the audience will pick up on. That clearly plotted deterioration is all the more affecting because they effectively depict Garland at the top of the play as a vital, intelligent, charismatic creature.

St. George does teeter dangerously close to going over the top – but not quite – in portraying Garland later in extremis as the controlled substances unleash her pain rather than assuage it. When she finally persuades Deans to give her various liquid and pharmaceutical crutches, she gobbles down the pills as if they are the antidote to a fatal poison and she guzzles the liquor as if she had been parched in the desert for days. More subtly, she stumbles onto the nightclub stage after her first return to drugs and the spotlight hits her. The pain and fear in her eyes is obvious and she shields herself against the glare.

St. George’s performance reflects years of studying Garland and a turn doing a Garland show, Dear Miss Garland. While this is not a Jim Bailey impersonation. she has worked on Garland’s unusual timber and her strange sound on vowels. Of course, she has all the iconic stances and moves, especially the rooster like image of Garland in silhouette, legs planted far apart, her spinal column arched almost horizontally like a dancer in a dip, the left arm straining towards the floor and her right hand aloft bent at the elbow holding the microphone downwards to her mouth – creating an almost impossible diagonal.

In New York, Quilter’s script seemed unexceptional and the direction there didn’t help it much at all. But Arisco has managed to make the scenes work far more effectively. Poor Michael Laurino has the thankless two-dimensional role of Deans, but he manages to make Deans seem more genuinely concerned about Garland as a person, knowing that the very performing that she is aggressively shirking is important to her far more than a financial benefit.

The always wonderful Colin McPhillamy fares far better as Anthony who is quite comfortable with his homosexuality in 1968. His empathetic pain for Garland is palpable, especially when he begs her to run away from this fatal trap and set up a sexless marriage with him in an anonymous small town life on the coast. This role, too, failed on Broadway despite the work of dependable veteran Michael Cumpsty, so McPhillamy deserves credit for making it land just right.

Tim Bennett’s set recreates the sitting room of an elegant suite at the venerable Ritz Hotel in London, cream colored with Edwardian decorative moldings and French provincial furniture. The way the set changes to the Talk of the Town supper club setting is simple but ingenious. All of it is enhanced immeasurably by Luke Klingberg’s subtle but evocative lighting changes.

Spoiler alert: McPhillamy doesn’t actually play the piano but he has created the illusion carefully with believable hand movements hidden by the angle of the piano to the audience, as well as tapping his feet, stomping pedals and turning pages of sheet music. The piano is actually played under the nightclub bandstand by musical director David Nagy who watches McPhillamy on a video monitor. He leads the tight-knit combo (who have only been playing together a few days) composed of Rupert Ziawinski, bass; Roy Fantel, drums; Gary Gottfried, woodwinds; Chas Reskin, trumpet, and Jason Pyle and Javier Sanchez, trombone.

We saw this show in New York last season which underscores how capable teams can see this same material differently. Bennett’s Garland was charming but she could be mean and even nasty when awash in her pain. The book scenes frankly didn’t work terribly well, but Bennett’s musical performances were stunning. The most remarkable thing was that Bennett and her director courageously depicted Garland’s voice as it likely was near the end of her life: lower in register, much rougher, slurring syllables, not always able to hit notes – and yet still compelling

If St. George chooses a more traditional sound, no one can argue that the lackluster script shoots to life anytime the star opens her mouth to sing. .

Actors’ Playhouse is hosting a pre-show addiction lecture series in partnership with Baptist Health South Florida throughout its run. The lectures will take place in the auditorium at 7 p.m. prior to the 8 p.m. performances of the shows Wednesday through Saturday, and at 2 p.m. on Sundays prior to the 3 p.m. matinees.