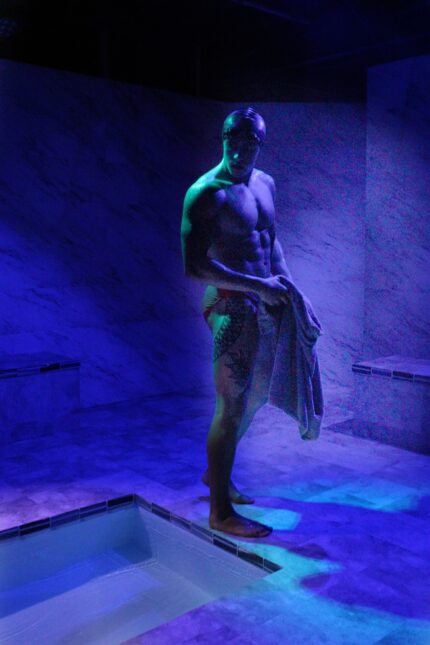 Gabriell Salgado is Ray, the center of controversy in Red Speedo at Ronnie Larsen productions / Photo by Dennis Dean

“Under the spreading chestnut tree,
I sold you and you sold me.”
—-nursery rhyme about love revised by Orwell for 1984

A fresh four-foot-long tattoo of a sea serpent wrapping around the sculpted body of an Adonis-like swimmer embodies his pride in being on the cusp of Olympic qualifying – and of the promised result of money, fame and affirmation of self-worth.

But it’s playwright Lucas Hnath’s damning metaphor for the grip of ambition to the point that betrayal of anyone is an accepted expedient in the scathing Red Speedo from producer Ronnie Larsen at The Foundry.

Using competitive sports as a milieu, Hnath depicts people willing to violate moral codes and personal loyalties in pursuit of the American Dream — as ingrained as an essential and laudable goal today as it was when Arthur Miller decried it in 1949.

When the lights rise on a single-lane pool, we see Ray, seemingly a likable,  handsome athlete of few words who has preternaturally risen in the sport triumphing over such names as Michael Phelps. But a problem has arisen on the eve of a final Olympic qualifying heat that would cement Ray’s future as a record-setting athlete and a candidate for lucrative product endorsements.

His fast-talking lawyer brother Peter is verbally drowning Ray’s impassive longtime coach about the discovery of illegal performance-enhancing drugs in a refrigerator shared by the team. Peter claims they are as likely belonging to a teammate. But coach wants to go public with the discovery out of an ethical responsibility. Peter fears that the uncertainty of ownership will fatally damage everyone’s reputation including Ray’s.

From here, it’s difficult to reveal the plot without spoilers. The twists and surprises for the audience are crucial to Hnath’s vision that swipes away expectation after expectation. Suffice it to say that no one is who they seem, no one’s motives are quite what they claim, and above all, no one ends the play pure.

The corruption goes far deeper than the simple fact that someone might be using forbidden drugs; it’s the moral corruption and rationalization that anything is kosher if it advances your goals.

Peter, in an uber-rationalization delivered with utmost conviction, says, “When you go for what you want, when you think about yourself, when you do what’s best for you, everyone benefits.”

What is clear is how both brothers are total converts to the notion that wealth and fame are essential to a comfortable life for themselves and even their children’s future.

A more loquacious Ray, who contends he’s not that bright and has no skills, tells a former girlfriend Lydia that a pending deal with Speedo is crucial, “cuz if they’re paying me, cuz if I have money, then I can be like a real person with a house and a car and a bank and a doctor and a dog for a pet and a family because that’s what real people have.”

In actuality, Ray is no dope; he can manipulate and use other people with the best of them. Even the tattoo has a sub-purpose: It is meant to make him stand out among a field of swimmers during a heat.

Director Stuart Meltzer, artistic director of Zoetic Stage, has propelled a quartet of fine actors in this descent into situational ethics. Notably, he has inventively staged a fluid evening in this difficult shallow intimate space with the pool serving as something separating people, something people must circle, something that confines them together.

Gabriell Salgado adds to one of the most memorable succession of roles that a nascent actor has had locally, including his physical transformation in Frankenstein under Meltzer’s direction.  Yes, he’s as good-looking as a Sports Illustrated cover and he spends the entire evening in the titular garb. But his triumph here with Meltzer is creating a complex creature who is eminently likable, every inch the kind of next door neighbor hero you root for, but who reveals scene after scene to have almost no ethical limits. Yet you buy that Ray is beginning to tire of the pressure and yearns for a simple ordinary life.

Chris Anthony Ferrer makes the morally bankrupt Peter a force of nature in his impossibly agile ability to spin doctor, lie and rationalize. His performance is crucial in driving the evening to its tragic conclusion.

Jerry Seeger, a veteran actor and educator recently in The Actors, inhabits the persona of the upstanding coach, holding firm with his arms folded as Peter rants. His commitment to the young man he has professionally raised and the challenge of doing the right thing convincingly collide.

Casey Sacco perfectly portrays Ray’s former girlfriend and disgraced sports therapist who Ray tries to inveigle back into a relationship – but for more complicated reasons.

High praise goes to the visual and aural designers. Melquisedel Dominguez creates a shallow but lengthy pool lane surrounded by white tiles streaked with lines. Preston Bircher and Panos Mitos’s varied lighting includes an unearthly blue glow emanating from the pool when the room is in half-light. Fight choreographer Paul Homza created one of the most convincing brawls seen locally in a tiny auditorium not at all conducive to the legerdemain.

Hnath, one of the country’s most prominent raising playwrights, has had several works produced locally including The Christians, The Thin Place and A Doll’s House Part 2. Space in some locally printed playbills is scarce to avoid the cost of printing an extra page or two, but increasingly the playwright’s credits and bio are being left out.

Once again, producer-actor-playwright Ronnie Larsen, who often hosts broad gay comedies, has added another credit to his growing list of serious productions worth taking a chance on sight unseen.