Feeding The Bear Has Promise, But It Needs More Feeding 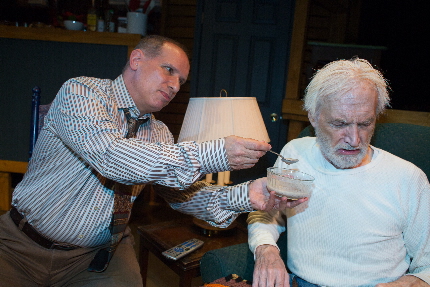 Feeding The Bear, a serio-comedy focused on caring for a father succumbing to Alzheimer’s (featuring a drag queen with a cooking TV show), has all the necessary ingredients for a tasty confection, but this work in progress hasn’t yet found the culinary magic to be a fully satisfying dish.

The world premiere by Michael Aman at Island City Stage is a heartfelt and often amusing look at siblings struggling with the heartbreak of caring for a deteriorating parent, simultaneously grappling with unanswered emotional damage that the father inflicted over the decades.

The precise reason this doesn’t quite come together remains elusive because this first public outing clearly has promise with its mixture of compassion, three-dimensional characters and witty gallows humor.

It may be because all of the characters are sad, wounded neurotics struggling with trainloads of baggage that have beaten most of the hope out of them. Even the daughter who has a bit of feistiness left and the flamboyant TV host are subdued, so no one propels the action with any energy. That may or may not be laid in part on the earnest actors and director Michael Leeds who seem to need more time in the parts to make them seem real people rather than acting roles.

But this is the first time the completed play, tweaked in the region’s infamously short rehearsal time, has been performed. As local audiences learned attending Florida Stage, this is just one step in a play’s development. It deserves another chance.

The premise is that Joey Adams (Island City Artistic Director Andy Rogow) is a nebbishy middle-aged English teacher caring for his curmudgeonly father nicknamed Bear (Kevin Reilley). They live on the family fruit farm about an hour outside a major urban center. Bear’s recognition of Joey, or whether his dead wife is in the room or even what decade it is morphs so fluidly that no one can track how lucid he is at any moment – not to mention that he has begun wearing his dead wife’s stockings and night gown. He cruelly rails against Joey being gay and slurs every ethnic group imaginable. Treated with such contempt since childhood, Joey is cripplingly introverted. His excuse for not venturing out to seek a relationship is that believes his pectorals are large enough to qualify as breasts.

Hiding out by using his father’s condition as an excuse, Joey refuses to seek full-time care for Bear as suggested by his sister, Chrissy (Niki Fridh). The twice-divorced woman is more of an unmoored spirit, balking at investing much time with the father who ridiculed her teenage bout of bulimia. 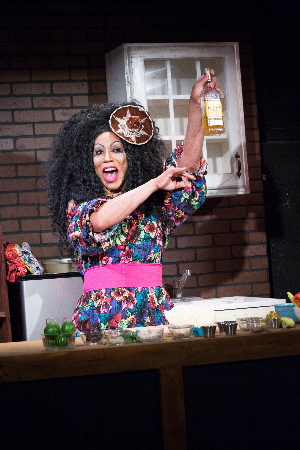 Fortunately, the siblings have a flinty but loving relationship including their shared love for a low-budget cable access television show, Cooking Is A Drag, that they often watch on the television in front of an uncomprehending Bear. The show features a very tall and outré host, Martini (Johnnie Bowls) who impersonates a Carmen Miranda-type while prepping Mexican food, a geisha for Asian food and a gingham-garbed farm girl for some down-South cooking.

Martini, while the best adjusted of all the characters, has his own family issues. They emerge as the sensitive young man, out of costume and out of high-camp mode, meets Joey who has summoned the courage to visit a gay bar.

The interaction of these four lives leads to more secrets tumbling out and changes as the 90-minute play moves smoothly through the evening.

As Boomers get older, their role as caretaker for their parents is becoming the theatrical theme du jour. (See our review of The Father currently running on Broadway). Not only is there room for other takes on the subject, but Aman’s vision is far broader. He examines how parents wreak damage on children that forges and lasts into their adulthood. The Alzheimer’s in this case is just a way of forcing this family into close quarters to examine their issues.

Aman spices up the journey with a good deal of sharply funny repartee and some poignant scenes. But some moments need sharpening. Joey is so self-conscious about his body that he often stands before a mirror massaging his chest. The first times he does that, he really seems to be instituting an auto-erotic episode. Further, the genesis of the crucial change in Chrissy’s attitude is not made clear, which may be the script or the production. Also unclear is the root of the inevitable softening of Bear’s treatment of his children.

Finally, the three cooking show scenes are, indeed, quite funny, but they go on too long. Even allowing for the humor needed to leaven this play, interludes this lengthy interrupt the flow of the story too much.

But there’s reason to hope Aman will pursue it. Island City scored a popular success last season with his world premiere of Poz.

Island City, a young but growing company, still has modest resources, but it continues to earn applause for its fine-grained imaginative efforts in the technical end of a production. David Hart’s underscoring music and sound effects and Ardean Landhuis’ lighting are solid work. But, once again, Michael McClain delivers a flexible setting with texture and detail, ranging from Bear’s homey wood-slatted farmhouse to Martini’s eccentric cooking studio.

Warning: While there is a good deal of parking on the street and behind the building — other businesses in the neighborhood have signs posted for 24-hour tow notices. Signs notwithstanding, most of that is available for theater parking after those businesses close, the theater’s staff has assured people repeatedly. But make sure you check with the box office that where you are parking is legit.