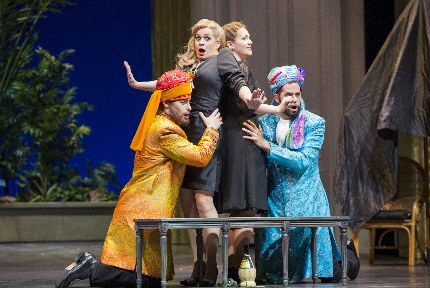 At the end of Florida Grand Opera’s beautifully performed and unusually comical edition of the classic Mozart farce Cosi Fan Tutte, you’ll want to take the heroes and their instigating buddy into a dark alley and beat all three of them with a two-by-four.

By all too successfully depicting the sadistic emotional vise that the heroines are crushed in, director Bernard Uzan and a glorious cast intentionally or unintentionally gut the opera’s blithe misogynistic ethos. The men are cruel, heartless jerks who trick the women they love into being unfaithful to prove what everyone knows, which is, of course, that all women are unfaithful. Even though it’s okay for men to cheat.

Yes, this philosophy was accepted thinking in 1790 — at least in the minds of men. But this production, which remains a quite funny farce, can’t dodge in 2015 that two soldiers wreak pain on their supposedly beloved fiancés by disguising themselves and then seducing each friend’s betrothed by threatening to kill themselves if the women don’t succumb. A laff riot as they say in vaudeville.

Cosi Fan Tutte, which translate roughly as “All women are like this…” contains some of Mozart’s most beautiful music. FGO does full justice to the challenge with such moving moments as the women and the soldiers’ buddy singing a plaintive farewell as the soldiers pretend to leave for war in “Soave sia il vento.”

Praise is due conductor Ramon Tebar and the opening night principals. Tenor Jason Slayden as Ferrando and baritone Jonathan Beyer as Guglielmo, are the soldiers. Basso Arthur Woodley is the genially self-satisfied Iago who dares the men into the trick and soprano Ava Pine is the saucy sex-obsessed maid, Despina. Lyric mezzo Brenda Patterson as Dorabella and the especially fine soprano Sari Gruber as Fiordiligi are the sisters. All but Woodley are making their local debuts. A second cast alternates.

Purists might argue that Uzan has taken the comedy too far, but it certainly makes this an unusually accessible and entertaining evening if you can get past the misogyny. When Ferrando is caressing Fiordoligi as she is singing, he drops to his knees and lets his hands wander. When it reaches her breast, her soprano suddenly peaks. Earlier, Fiordoligi pretends to faint and her sister realizes she needs to do the same. The disguised suitors trying to win their quarries’ affection, cynically enter a scene stroking a puppy and a kitten like that Jim Beam commercial of a few years ago. The sisters wear glasses to explain why they might not recognize their beaus in disguise.

All of the principals have the requisite strong, expressive voices that negotiate most of the score effortlessly. But they are also game for the comedy whether it’s a broad grimace, tossing in a hip thrust for emphasis or taking a baggy pants comic’s slight pause in timing before a laugh lyric. The lively Pine especially makes for a joyful if heartless accomplice to Woodley’s plot.

Visually, the FGO-owned production borrows heavily from Miamian Riccardo Hernandez’s 2007 set design adapted for Uzan who transposes the plot to a resort-salon on the Cote D’Azur sometime between 1920 and 1960. Howard Tsvi Kaplan’s vibrant costumes encompass haute couture gowns with copious jewels, smartly tailored soldiers’ uniforms, indulgent gypsy costumes for the slumming ladies and a rainbow of sherbet colors for the soldiers’ disguises as turbaned Turks, Albanians or denizens of some imaginary country.

The FGO orchestra spun Mozart’s lovely score like molten gold under the baton of Tebar, who also tinkled the harpsichord keys during the recitatives.

FGO is facing serious fiscal problems, seriously imperiling its future at the Broward Center for the Performing Arts next season, but you can’t tell from this production.

To read about the threat to FGO staying in Broward, click here.
and here