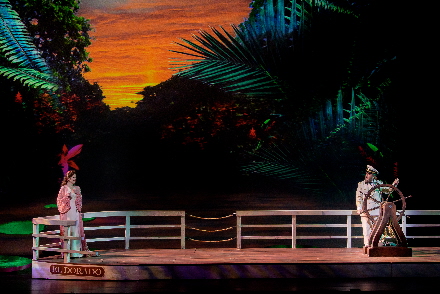 Even more unflinchingly romantic than those starving Bohemians in the garret or those Egyptians being buried alive, the unalloyed passion coursing through Florencia en el Amazonas in its first production at Florida Grand Opera is a pungent pleasure.

Composer Daniel Catán’s 1996 musical voyage up the titular South American river tracks loves lost and found in a narrative spiced with Gabriel Garcia Marquez-style magical realism. That facet drives the journey into a mystical world of Nature that resonates and intermingles with an equally metaphysical power of true love.

The passenger list on the steamboat El Dorado (the Spaniard’s mythical city of gold) includes a young couple so afraid of the potential pain of betrayed love that they reject the opportunity at first. Down the ship’s railing as the jungle passes by is the long-married couple whose relationship has frayed near breaking in its own emotional undergrowth.

But at the center is the mature contemplation of the title character, a Brazilian opera diva who has discovered that two decades of international success cannot fill the abyss created when she abandoned the lover of her youth, the man whose adoration inspired her to seek the career.

Catán, a Mexican composer who died in 2011, created a ravishing melodic score that swells with echoes of Puccini, Ravel, Strauss, Stravinsky and Debussy, but also film scores like those of Erich Wolfgang Korngold at Warner Brothers and even John Williams – and yet results in a voice solely his own. Catán was the first Mexican composer to have an opera produced in the United States, Rappaccini’s Daughter, and later was commissioned by Placido Domingo to write an opera based on the book and film, Il Postino. Florencia was reportedly the first Spanish-language opera to be commissioned by a major United States venue (a consortium of Houston, Seattle and Los Angeles companies.) For such a contemporary work, Florencia has received numerous productions and has several scheduled ahead.

Less acknowledged, Florencia’s libretto by Marcela Fuentes-Berain and translated into English here by Jeremy Sortore is at every step just as emotionally rich without becoming cloying, especially in the clear connections made between the lush world of nature surrounding the characters and the emotions they are feeling.

The story inspired by Marquez, but not drawn from a specific work, posits the middle-aged Florencia journeying incognito from Colombia to her hometown of Manaus in Brazil to perform a concert that she hopes will attract her first lover Cristobel. He disappeared into the jungle to hunt butterflies after they parted.

Among the others aboard all looking forward to hearing Florencia Grimaldi sing are Arcadio, a young deckhand anxiously searching for some purpose in life. He becomes smitten with Rosalba, a journalist who spent two years preparing the notes for a book about Grimaldi and hopes to interview her in Manaus. Narrating the odyssey is Riolobo, a charismatic first mate who later turns into a mystical shaman with butterfly wings. A storm seems to cost one character’s life, Rosalba’s precious notebook is destroyed and Riolobo turns into a river spirit. Oh, and there’s cholera ahead. As well as true love. The tale reveres the value of love but it is more clear-eyed than some dewy paean by recognizing its conflicts and complexities.

This production is especially notable for its use of Opera Colorado’s physically simple but evocative sets, the stylish turn-of-the-century gowns, and the lighting that evolves as the journey moves into ever stranger territory. But above all, an entire essay could be written about Aaron Rhyne’s ingenious use of animated projections that track the ever changing scenery seen from the railing of the boat –vistas of rippling waters, dense jungles, Maxfield Parrish-like clouds at sunset all slowly passing by the El Dorado. Then the subtly intensifying magical realism becomes apparent. For instance, the show curtain is an ancient white-on-black map documenting the many spidery tributaries feeding into the Amazon, a complexity that mirrors the course of love. But later in the journey, with a wave of Riolobo’s hand, the waterways morph into the ribs of a huge green leaf, and later the same structure transforms into a close-up of a colorful butterfly’s wing as he himself becomes such a creature.

Surprisingly, the stunning visuals and even Catán’s breathtaking score do not overshadow the strength of an unassailable cast who act their parts with more credibility than many of their colleagues in the field.

Top of the list is Ana Maria Martinez, a Puerto Rican soprano gaining a major reputation around the world. Martinez has performed other parts in the work, but the FGO production marks her first performance of the title role, after years of encouragement from Catán’s widow. The score may not be as challenging to sing as bel canto work, but Martinez invests her nectar rich voice with a carefully calibrated vocal portrayal of painfully poignant regret at the realization of the loss of Cristobel’s love.

Steven LaBrie, a handsome Texas baritone with long dark braids and a runway charisma, makes his FGO debut. He delivers a Riolobo with a resonating captivating sound and crucially makes the dreamlike passages believable.

Cecilia Violetta Lopez makes her FGO debut as the writer afraid of romance, Mariya Kaganskaya and William Lee Bryan are the older squabbling couple whose later reunion moves the heart, and Rafael Porto makes a paternal captain. Surprisingly effectively is Andrew Bidlack, a Pennsylvania tenor, whose part as the disillusioned deckhand could have been boringly predictable, but he invests the young man with a yearning that audience members could relate to as he describes his dream of being able to fly.

The direction of Argentinian Jose Maria Condemi and the musical direction of FGO’s house conductor Ramon Tebar are as fluid as the story and the music, but what is most commendable is how effectively they have elicited those acting performances.

FGO’s orchestra dives deep into the soaring sweeping score as if they were luxuriating in the rejuvenating powers of a fountain of youth. Their warm embrace of such a glorious score is so winning that it can be easily overlooked that they repeatedly overwhelm some of the singers.

An added treat opening night was the appearance of Catán’s widow, Andrea Puente, who flew in Saturday from a production in Madison, Wisconsin, to participate in the pre-show briefing with Justin Moss.

In all, Florencia makes a rapturous and accessible finale for FGO’s 77th regular season. 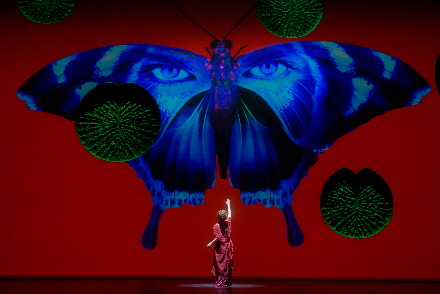