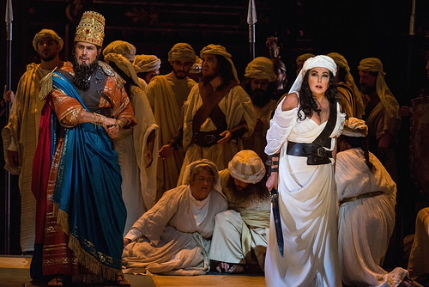 Those who doubt that opera still has a hold on a segment of the general populace should have been at the opening night Saturday of the Florida Grand Opera’s production of Verdi’s infrequently-mounted Nabucco.

In the middle of the third act, the supertitles in English and Spanish switched to Italian as the chorus of Hebrew slaves began singing “Va, pensiero, sull’ali dorate,” a section so popular that it has served as an unofficial Italian national anthem and is often requested as an encore.

But after a few notes, the lyrics emanated from every corner of the Ziff Ballet Opera House at the Arsht Center. First, only a tentative murmur hummed, but then a full-throated sound surged from the $200-plus premium seats to the nosebleed section. Hundreds of people in the audience were singing along. Conductor Ramon Tebar swung to face the audience and led them to be softer here, whipping them up in the home stretch. The patrons sang more assuredly and warmly than if they had joined in on “The Star Spangled Banner.”

It was an electric moment reaffirming that, in some quarters, opera remains as beloved a part of an audience’s cultural DNA as Justin Bieber is in another part of Miami.

The Sing Along With Ramon was the highlight of an otherwise entertaining if not especially thrilling rendition of Verdi’s first major success. The work is not often heard live because of its fiendishly strenuous demands on the soprano singing the part of Abigaille, the villainess. Since usually only three or four singers are capable and willing to do the part in any time period, this production is all the more special because Florida Grand Opera has engaged two of that tiny sorority to perform the role.

In this case, the part of Nebuchadnezzar’s illegitimate daughter is essayed by Ukrainian-born Maia Guleghina who did the honors opening night and New Yorker Susan Neves, both making their FGO debuts. Also doubling up are high baritones Dario Solari from Uruguay and Nelson Martinez from Cuba as the titular Babylonian emperor who goes mad while trying to exterminate the Jews during exile from their homeland.

The plot is filled with the usual complement of power, passion, betrayal, madness, enslavement, suicides, executions and all the other verities of classic opera. Those wanting to see or hear resonances can try to make comparisons between the political situations currently in the Mideast or the Holocaust, although the exile theme will more strongly echo for natives of Cuba and the African Diaspora than snowbirds from New York.

While not the title role, Abigaille is often the draw because of its difficulty, having notoriously ruined the voices of some sopranos over the decades. Blessed with a supple mellifluous instrument, Guleghina has been working since the mid-1980s and her taking on this voice-crippling role at any age is courageous. That said, to this uneducated ear, some of her top notes sounded harsh and forced while some of her bottom notes sounded a tad ragged. And perhaps it is in the score, but she seemed to hold a note a beat longer than anyone singing with her as if she was trying to top them, especially when backed up by the chorus.

The irony is that despite her clarion voice that was probably audible in the lobby, her most affecting passages were the quieter ones: her lovely restrained aria about love staged while lying on her back which humanizes her for the only time in the opera, and in her dying aria as she succumbs to the slowest acting poison since Hamlet got cut by Laertes’ blade.

Solari’s Nabucco/Nebuchadnezzar high baritone was every bit as thrilling as the soprano’s and far more believable. Solari was responsible for one the few touching moments in the evening when, aware that his true daughter is about to be executed, Nabucco prays to the Hebrews’ God in genuine contrition for his sins and promises to convert in the aria “Dio di Giuda.”

The rest of the cast was beyond reproach: Floridian mezzo-soprano Mabel Ledo in her FGO debut as Fenena, the true daughter who converts to Judaism at the peril of her life; tenor Martin Nusspaumer as Isamele, the nephew of the king of Jeruselum and Fenena’s lover, and sonorous bass Kevin Short as the apparently indestructible high priest Zaccaria who seems to survive every order to wipe everyone out.

Music Director Tebar passionately led the orchestra, which had a bright strong sound with individual instruments shooting clearly when warranted above Verdi’s wall of melody.

Stage director Leigh Holman allows over-the-top acting that would seem incredible in moustache-twirling melodrama. While that may have been intentional, compare the result to last season’s equally dramatic, but far more plausible Rigoletto by the same composer.

To Holman’s credit, she makes the most of FGO’s small army of chorus members and supernumeraries portraying Levites, magi, lords and virgins. She arrays them skillfully to create tableaus reminiscent of those massive paintings of Biblical scenes found only in museums.

Special credit is due to those unsung singing footsoldiers who, under Tebar’s baton, provide a richness to the aural aspect of the production

The libretto by Temistocle Solera is unusually lyrical and expressive but not overly purple, at least in the verbiage translated onto the supertitles. The score also was a clear reminder how much of an influence Verdi had on so many composers who followed him; you can even recognize echoes (in reverse, of course) of work as far-flung Sir Arthur Sullivan’s operettas with W.S. Gilbert.

The physical look is strangely lush and false at the same time. Thaddeus Strassberger’s set rented a Washington National Opera consists of two-dimensional flats painted in trompe l’oeil style representing the towering columns of the temple in Jerusalem and the long corridors of Nabucco’s palace. It resembles the sets common in Victorian toy theaters.

Mattie Ulrich’s costumes from the same production put all of the Hebrews in virginal white robes to contrast with the regal red, teal and gold robes of the Babylonian royalty. Some costumes made of weird tapering drapery that makes Nabucco’s courtiers look like satanic worshipers in a horror flick and most folks have headdresses with trains reaching to the floor. But that allows Holman to create some startling visions anytime a pagan Babylonian invades the space of the holy Hebrews.

Verdi, of course, was later to write more legendary operas, but this FGO edition is one worth seeing to paste in your completist’s catalog.

Side note: Every opera in FGO’s season is preceded one hour before curtain in both venues by a free lecture from Justin Moss, director of Broward operations and outreach. Lecture is the wrong noun. Moss’ presentations are always a lively, insightful, informative and highly accessible backgrounder on the composer, the era the show was written in, the plot and the high points to listen for. It provides the context that is indispensable for those who don’t know much about opera let alone the specific opera, but it likely would be interesting to knowledgeable operagoers. Highly recommended.