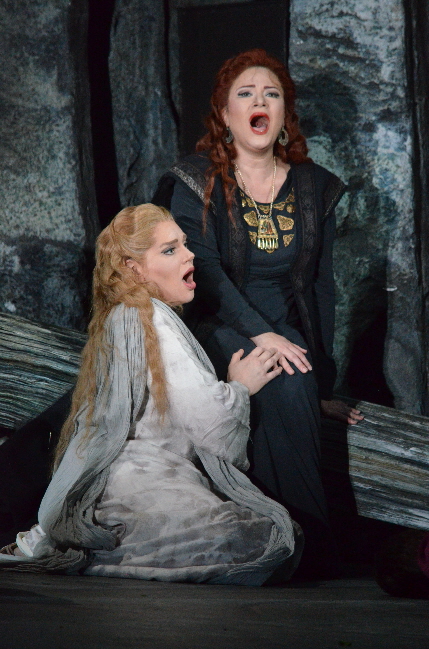 You can see Casablanca over and over, designed to be frozen in time. But the best live performance art – not once-removed audio or videoed versions – is a transient one-time experience.

So when Florida Grand Opera agreed to produce Norma, Bellini’s masterpiece infrequently mounted because of its Herculean demands on the few divas willing to perform it, it provided an opportunity for local audiences to experience what they had only heard other people talk about or had listened to on recordings.

Fortunately, FGO’s version that opened Saturday is a superbly executed triumph that melds technical mastery and gut-wrenching emotion from not just the soprano Mlada Khudoley nailing the title role of the middle-aged Druid priestess, but from mezzo Dana Beth Miller matching her head-to-head as the younger colleague who has stolen the affections of Norma’s hunky lover.

To hear Khudoley’s flawless voice scamper up and down the bel canto score is certainly breathtaking, but to hear she and Miller in their duets is like watching two birds in flight, one changing course only to be mirrored instantly by her companion.

For novice opera patrons, the production directed by Nic Muni and conducted by Anthony Barrese exemplifies why you should go in the first place. Despite the raging passions and a plot that is pure soap opera, the performers invest themselves so deeply into their roles that this edition never seems to go over the top into melodrama. This is a major feat given that, intentionally borrowing from Euripides’ Medea, Norma seriously considers slaughtering her out of wedlock children to punish her faithless lover.

Norma is really just a hyperventilated love triangle that turns in on itself several times with everybody willing to give up somebody and to sacrifice their love or their lives.

To abbreviate it, Norma is the high priestess of Druid cult in Gaul during the pre-Christian occupation by the Romans. Secretly, she has been having a forbidden traitorous affair with the Roman governor Pollione while counseling her people not to rebel against the invader until the time is right. Then she discovers that Pollione, who is about to return home, has taken up with the lovely younger priestess Adalgisa. This is not going to end well.

The title role has been daunting for its marathon demands since Vincenzo Bellini first had it produced in 1830. Until the last six years, it was only attempted by the greats like Maria Callas and Joan Sutherland. FGO hasn’t mounted it in a quarter-century.

Khudoley, a Russian soprano in her FGO debut, displays enviable technique including the dynamism of her voice rising and falling within a single note of Bellini’s long, long vocal lines. But she does far more than stand and deliver notes; her facial expressions, her posture, her body language exude the initial commanding presence of an undisputed leader and then the private agony of a betrayed lover.

Miller, a Texan previously seen in FGO’s Rigoletto, is not some dewy ingénue, but a full-blooded if basically decent person unaware that her lover has a history.

Giancarlo Monsalve, also making a local bow, is perfectly serviceable as Pollione, but he is not in the same league as Khudoley and Miller.

As usual, the leads are double-cast: Mary Elizabeth Williams plays Norma with Catherine Martin as Adalgisa and Frank Poretta as Pollione on alternating performances. Check FGO’s website for who performs on what date.

But even the large cast of chorus members are giving acting performances rather than just providing a wall of sound. Their passion ramps up the sense of a community poised to evict the occupying foreigner with blood if need be. No modern resonances there.

The production has two other notable aspects. First, baritone-bass Craig Colclough stepped in to play Norma’s father, the high priest Oroveso. Colclough, a 2012 FGO Young Artist graduate, gets a rare treat: When Richard Wagner conducted this piece that he loved, he took the then-common liberty of writing a section for it in the style of the original composer. In that case, it was a rousing oratory by Oroveso to whip up the populace to rebel against the Roman occupiers. Again, rarely performed, FGO decided to insert it in this production and Colcough reportedly learned it in two days.

The other is that the central set of a temple is usually located in a heavily-wooded area associated with the Druids’ nature-centric religion. But John Conklin’s set rented from the Cincinnati Opera is placed high atop rocky crags akin to those found in the journey sections of Lord of the Rings. With towering rock walls brilliantly lit by Thomas Hase, the vision invests a cold elemental unforgiving aura to better ground these overheated proceedings.

Barrese’s orchestra sounded note-perfect whether playing full lush melodies or delicate minimal accompaniment designed to allow the singers’ naked voices to rise or fall on their own merits.

Norma is the second production this season that will also play in the Broward Center, but the last two, Don Pasquale and the highly-anticipated Holocaust-related opera, The Passenger, will not.

Note: Each performance has a post-show talkback with FGO leaders, but the real treat – especially for people new to opera — is the talk at both locations one hour before curtain from Justin Moss, director of Broward Operations and Outreach. Moss’s lifelong love of the art form is infectious as he delivers an informal chatty primer on the background of the piece, a plot summary and facets to watch out for.