FGO’s The Barber of Seville Suffused With Comedy 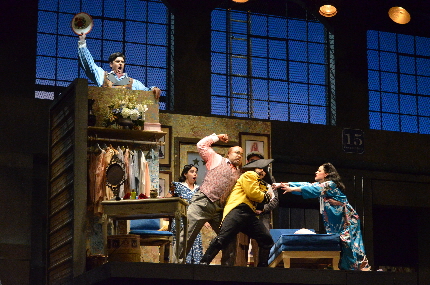 Even the Bugs Bunny The Barber of Seville (which gets a subtle nod in Florida Grand Opera’s new outing) never featured the tenor and baritone-bass dueling with a plumber’s plunger and a toilet bowl brush.

But this delightfully profligate production of Rossini’s wildly popular 200-year-old comic opera distances itself from any mustiness by emphasizing a madcap sensibility.

Restaging a production from the Vancouver Opera and Pittsburgh Opera, Canadian stage director Dennis Garnhum has drenched this edition with unrestrained whimsy and enough farce to echo a different night at the opera, as in the Marx Brothers.

Musically, the production under house conductor Ramon Tebar is relatively solid, from the lovely voices nimbly trilling the bel canto runs, to the lively orchestra, which recedes into silence to allow an uncredited harpsichord player to remind the audience that this is, indeed, a 19th Century work.

But the musical aspect is clearly secondary to Garnhum’s irreverent vision: resetting the proceedings in a bustling 1940’s movie soundstage in Seville deep into the filming of Carmen. The lovely ingénue Rosina has been transformed into the studio’s sexy star entering with jewels and a fur; her possessive older guardian Bartolo is a dictatorial studio mogul, and Figaro – who slides onstage on a foot-powered scooter — is now a freelance hairstylist working on the film.

Rossini’s score is intact, as is the bulk of the libretto, but everything else has been refracted through Garnhum’s irreverent vision with surprisingly modern resonance. Don Basilio in this production is a bottom-feeding paparazzi who is taking compromising photos when he isn’t shooting anachronistic selfies with Bartolo. When he slimily sings of scandal as a way to destroy Rosina’s suitor Almaviva, he might as well be a stringer for TMZ. The director ladles on the visual gags from Bartolo’s guards transformed into hoods wearing pinstripes to Bartolo sexually stroking a clothes mannequin. All that’s missing is a pie fight.

Far from a submissive ward, Rosina who is often seen in a silky slip sings the famous “Una Voce Poco Fa” aria as a fully-experienced coquette: Her words “I am gentle obedient, sweet and loving” belie the next line “but push me too far and I’ll become a viper!”

Garnhum beautifully stages the opera’s opening scene as the studio slowly gears up in the pre-dawn hours with crew members, acting extras and others stumble in for another day’s work on the soundstage. As far as that Bugs Bunny reference: The first to arrive is Ambrogio who takes out of his lunch pail a large carrot to munch on.

The cast is having a terrific time with Rossini and librettist Cesare Sterbini’s tongue-twisting twittering score. The strapping baritone David Pershall, in his FGO debut, dominates every scene he enters as the vibrant Figaro with a gusto that emanates with every note he sings. Brian James Myer alternates in the role.

Megan Marino, making her FGO debut, is perfectly proficient vocally as she is throwing herself physically into the pratfalls. Rosina hardly appears or sings for 45 minutes, but when she does, she owns the evening. She, like Hilary Ginther, who plays the role on alternate nights, is a mezzo-soprano as opposed to the lower contralto voice that piece was originally scored for.

Andrew Owens, also in a FGO debut, has a fine tenor as the hero Count Almaviva, but he also eats up the scenery in various disguises including a piano accompany who looks like a young Rob Lowe impersonating Stuart Smalley. Sometimes he seems a bit breathless and his voice strains a bit, but so would you faced with this score.

The season opening broad comedy is part of Florida Grand Opera’s ongoing rebuilding effort under General Director and CEO Susan Danis. The calculated crowd-pleaser marks its 10th outing at FGO; the most recent in 2010 featured considerable animated projections for scenery. But the rest of the season features the deadly serious Norma by Bellini, Donizetti’s Don Pasquale transferred to Rome in the swinging 60s, and the FGO premiere of shattering 2010 work about the Holocaust, The Passenger by Mieczystaw Weinberg.