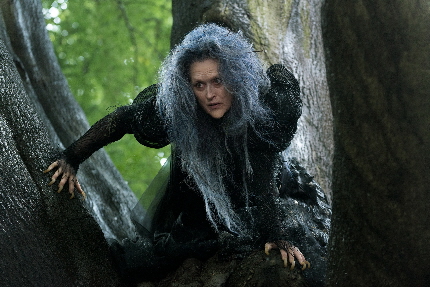 Meryl Streep is looking for whoever is responsible for her new hairdo in Into The Woods / Photo by: Peter Mountain

I have been a Stephen Sondheim acolyte much of my life and his Into The Woods with James Lapine has been a cherished memory since I saw it on Broadway in 1987. Treasuring work makes one resist tampering with a jot of Holy Writ and sets the bar very, very high.

Keep that in mind when I say that if you can accept that film is a different storytelling medium from theater, this version of Into The Woods is not only faithful to Sondheim and Lapine’s vision, it actually clarifies and deepens the musical’s themes and narrative. This present opening Christmas Day is an unalloyed triumph.

Most of the physical and moral darkness is intact despite this being produced by Disney. Director Rob Marshall, who resurrected Chicago and possibly the movie musical, delivers precisely the disconcertingly nuanced world of greys that the authors want the audience to acknowledge and yet still move forward to community-based action.

Leading a deft cast and profligately skilled creative team, Marshall excels at illustrating Sondheim and Lapine’s use of conjoined fairy tales to illuminate a host of issues, including but not limited to the consequences of actions, the pain of parenthood, children struggling to get past parents’ failings, the virtues and vices of community dynamics, and the complexity of real life.

It is all here because Lapine, the stage musical’s bookwriter and director, wrote the screenplay whose additions and deletions illuminate and underscore the thematic material. For instance, the Witch’s backstory involving her mother’s curse – which narratively drives the musical – is dealt with on stage in a few words at three points in the show. They speed by so quickly that it takes a few viewings of the show or listening to the album to comprehend. Here, Marshall and Lapine either linger a bit on those words and/or add a visual element that allow the audience to soak it in.

The film is also a glorious celebration of Sondheim’s words and music. It starts with a lush soundtrack delivered by 56-piece orchestra and a note perfect cast, an effort led by musical producer and supervisor Mike Higham, music supervisor and longtime Sondheim stage conductor Paul Gemignani, orchestrations by longtime Sondheim orchestrator Jonathan Tunick and the overall adaptation of the score for the movie by David Krane who did the honors on Tim Burton’s film of Sweeney Todd. Additionally, the enunciation of Sondheim’s difficult lyrics has never been more crystalline on stage or CD.

The irony is that this movie was marketed this fall as if it was not a musical. Only lately have promotional clips online and on television depicted anyone singing for more than a few seconds. In fact, be assured and gladdened that the score is nearly intact other than the disposable “My Old Pal,” the group number at the end of Act One “Ever After” and (the only really tragic cut) “No More.”

One thing that was excised (this is Disney after all) is any whiff of sexual subtext. On stage, it was always a shade discomfiting, but Little Red Riding Hood seemed on the cusp of adolescence, so her discovery implying sexual awakening made sense. But on film, with its literalness, it would have just been too creepy. This robs the meaning from her last song about “I know things now.” For purists, it’s the one palpable cop-out. Similarly, the seduction of the Baker’s Wife by the prince is limited to some heavy necking rather than the direct implication of a sexual coupling. So the subtext of adultery and its ramifications lose a bit of bite. Also the Narrator and Mysterious Man are AWOL, although the Father makes a late appearance.

But there is some welcome tinkering. For instance, Rapunzel has a bit more screen time which helps better define the Witch by their interaction. A few tiny flashes give a nod to Sondheads like myself. In the first exterior scene for the ball, the orchestra plays the opening strains to “Night Waltz” from A Little Night Music.

Readers of this site don’t need much in the way of plot recap. It weaves into the same world all the stories of Cinderella, Rapunzel, Little Red Riding Hood and Jack and the Beanstalk, then blends in a new tale of a Baker and his Wife who are urged by the Witch next door to fix their childless condition by finding ingredients for her potion. Everyone sets off at the same time on their diverse quests to achieve their wishes by entering the dark woods. The stories end happily halfway through the show (more like two-thirds through the movie), but then the consequences of their actions boomerang on them and they must learn to cope with very un-Disney death, injury, betrayal and other losses.

It may be Sondheim’s most popular and most produced work, especially by schools ranging from colleges down to middle schools who erroneously think it is a fairy tale itself. It’s set among fairy tales, but it’s very much about reality. Written more than a quarter-century ago, its themes resonate deafeningly with a prescience of a post-9/11 world awash in fear, uncertainty, dashed dreams, partisan finger-pointing and a rasher of other current ills.

To get the movie made, Disney took no chances, hiring  bold-face names Meryl Streep as the Witch, Johnny Depp as Red Riding Hood’s Wolf and Chris Pine as Cinderella’s Prince. Then they hired known quantities such as Emily Blunt as the Baker’s Wife and Anna Kendrick as Cinderella, with Christine Baranski thrown in as the Stepmother and Tracey Ullman as Jack’s Mother. For the everyman Baker, they hired the endearing James Corden, a Broadway sensation in One Man Two Guv’nors who will take over Craig Ferguson’s TV show this year. Finally, the relative unknowns were added in: Lilla Crawford as Little Red Riding Hood, the gorgeous MacKenzie Mauzy as Rapunzel, Daniel Huttlestone as an age-appropriate-for-a-change Jack, and as Rapunzel’s Prince, an equally gorgeous Billy Magnussen who was a hit in Broadway’s Vanya and Sonia and Masha and Spike.

Every last one, plus the supporting cast, are as close to perfect as you could ask for, no asterisks or visible compromises. Not only are they all first-rate actors, but every last one can sing as Sondheim would have hoped, even Depp in his own weird way.

Streep, who has sung on stage before, is that overused cliché: a revelation in the role. Hidden most of the time under flowing blueish-grey locks and a ton of old age makeup, she still invests every moment with credibility, emotion and layers of meaning. This last comes from analyzing seemingly each phrase of Sondheim’s lyrics and finding a way to not only put across their meaning, but to give them a fresh spin that echoes none of her stage predecessors. Her work is a master class in singing a theater song, comparable to Barbara Cook, Mandy Patinkin or Patti Lupone,

Depp only has two scenes and his voice is idiosyncratic, to be sure, but he’s a perfect fit to embody a ravenous anthropomorphic beast who nearly drips saliva in anticipation of his next meal. But as noted, any hint of sexuality from the original has been erased, which must have been a challenge when dealing with Depp.

Corden makes a relatable stand-in for all of us, the Princes are hilarious trying to outdo each other’s plaints in “Agony,” Kendrick with her oddly pretty face and overbite is a winning Cinderella and the two kids are fine.

The surprise is how good Blunt is as the morally pragmatic Baker’s Wife. With her luminous eyes and a lovely voice, she seamlessly inhabits the role in ways that defy analysis but which make her eligible for award consideration.

Sondheim has had a variable track record on film: West Side Story was fine, Gypsy was a mixed blessing, A Funny Thing Happened on The Way To The Forum was a disappointment, A Little Night Music was terribly flawed and Sweeney Todd was… better than expected, but a bit off-beat.

But Sondheim loves movies. His musical Passion was inspired by an Italian film, he wrote the soundtrack for the French-Italian film Stavisky and he provided the number “I Never Do Anything Twice” for the Sherlock Holmes film The Seven Percent Solution. He even defended Tim Burton’s Sweeney Todd.

He’s in good hands with Marshall. Both realize that theater is a medium that relies on the audience actively investing its imagination to achieve the suspension of disbelief; film is an intrinsically literal art form that almost encourages an audience to passively sit back and imbibe the work. We see the beanstalk grow; we actually get glimpses of the Giantess’ face.

The upside is how superb artists with a seemingly unlimited budget (and CGI) can combine their talents to devastating effect. The Witch’s tornadic penultimate number, “Last Midnight” is a Cat 5 melding of singing, acting, cinematography, direction, special effects, everything. Obviously, we love theater, but this is what theater can’t do.

Marshall also has some inventive bits of staging. Cinderella’s Prince is chasing right behind her before the number “On The Steps Of The Palace.” But in order to allow Cindy to stop dead and have her soliloquy about indecision, Marshall drolly freezes everything around her including the Prince and allows her to roam around the stone steps thinking aloud. His camerawork and staging generally is nimble and fluid, swirling like the guests waltzing at a ball. He and editor Wyatt Smith do a lot of quick cutting but it’s not jarring as it was, intentionally, in Chicago.

The visual style from Marshall and cinematographer Dion Beebe, intentionally or not, echoes other films. The atmosphere itself is made palpable with plenty of smoke, mist and chemically-induced or CGI-enhanced effects a la The Lord of the Rings. Petals or pollen waft in the air as in Ridley Scott’s Legend and the sunlight struggling in vain through the branches and clouds even at high noon revives memories of the original 1946 French version of Beauty and the Beast. The color palette is notably off-beat with a dingy tinge; no primary colors for two hours.

Kudos are also due the costumes by Colleen Atwood that range from grimy peasant garb to gorgeous ball gowns, and praise the entire production design by Dennis Gassner with its endlessly different array of thick twisted thickets. While interior scenes were shot inside Shepperton Studios outside London, a very large portion of the film was shot on locations in England and not created inside a computer.

It’s impossible for this critic after a half-century of gladly buying into the musical theater paradigm to know if any non-theater Millennial or younger can accept people erupting into song. If anyone can make it remotely credible to a post-modern audience, it’s Marshall who did just that in Chicago. (I’m one of sixteen people who enjoyed his work on the film version of the musical Nine). But it passed my acid test: When the voice of the Wife sings, “Sometimes people leave you, halfway through the wood / Do not let it grieve you, no one leaves for good,” my eyes welled up.

Considering that no one could be certain the film would not tank, the tag line for the advertising “Be careful what you wish for” is especially courageous, almost begging for a snarky rejoinder. Well, mine came true. Thank you.