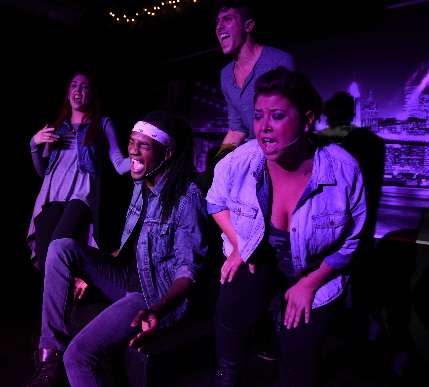 Marquee Theater Company’s production of Jason Robert Brown’s Songs For A New World slices open the studied flat affect of the “Whatever” generation to expose inner lives as vibrant, complex and tumultuous as that of any group before them.

The ambitious new troupe delivers an emotionally and aurally powerful excavation of the angst roiling inside those seemingly blasé young adults you pass every day in the mall or the office break room.

Brown’s first work to get a major production in 1995 is a song cycle – meaning a collection of numbers hopefully brought together with a thematic glue but with little or no discernable narrative or definitive character arc. In this case, the 16 songs over two acts focus on the moment of decision. The composer-lyricist said, “It’s about hitting the wall and having to make a choice, or take a stand, or turn around and go back.” As a whole, the piece would make a fine item to include in a time capsule to reflect urban America entering the new millennium.

But what really bonds these numbers, at least in this production, is the overwhelming passion engulfing contemporary characters and the situations they face offered up along with their emotional viscera by a quartet of simply superb acting singers: Jordana Forrest, James Giordano, Leah Sessa and Elijah Word, led by director-choreographer Ben Solmor. Through anthems and power ballads, the pungency of pain, fear, cynicism, idealism, yearning and hope.is so intense as to border on the violent.

Solmor and his Marquee co-founder Andrew Shultz made intriguing changes to the material that has become a popular title for regional theaters (Actors Playhouse triumphed with it in 2005). First, they have reordered the songs, although anyone not familiar with the original won‘t notice.

Second, and more telling, Solmor has enhanced the piece with five dancers (and a few uncredited appearances by himself). Sometimes they swirl around the edges of the quartet. But he has matched four of them up as doppelgangers to each singer, dressing them alike and cutting their hair the same, so that they serve as an extra expression of the singers’ emotions. This works well the majority of the time, although a few times it actually distracts from the singers by pulling the audience’s focus.

The only significant shortcomings is that the tracks are played high in the Richter Scale and the singers’ enunciation is not always crystalline, so some lyrics get lost. When they do, especially in the beginning of a number, it takes the audience quite some time to figure out the premise of each song.

For instance, the first act closer, is an impassioned plea for God’s help in a difficult time, set in a dark space with a row of votive candles. Although written in 1995, it seemed like a cry of New Yorkers in the aftermath of 9/11. Only when the intermission lights came up and you looked at the program, did you see the song title “On the Deck of a Spanish Sailing Ship 1492.”

Forrest, who has worked mostly with small companies in the region, brings painful poignancy to the results of choices in “Stars and the Moon” as a woman who passes on two lovers in favor of a loveless marriage to a wealthy man. Then she brings humor to her depiction of a wife who climbs out onto the window ledge of her 57th-story apartment to get her neglectful husband to pay attention in “Just One Step.” This is an example of reordering the titles: In the original “Stars” is sung later in the show after “Step,” but here it seems a logical evolution from “Stars” to “Step.”

Giordano starts a little weak in the opening number, but then comes to life with several standout numbers including the funny “She Cries” about a man trying to come to terms with a manipulative lover.

The tall but gentle Word was mildly intriguing as Aida’s servant in Marquee’s last production. But he establishes himself as a talent to watch here with a bold, impassioned voice, whether it’s as the agonized leader of the sailing ship or the young man with dreams of becoming a basketball star in “The Steam Train” or the imprisoned activist in “The King of the World.”

We have been praising Sessa incessantly for some time now for her clarion voice melded with intense acting chops. Once again, she keeps nailing number after number including “I’m Not Afraid Of Anything,” the story of a woman who is herself unafraid but who is surrounded by loved ones who are fearful.

Brown is part of that once-new generation of Broadway songwriters who remade audience expectations and whose work speaks directly to a younger audience. He wrote New World during his day job as a musical director on Broadway. He later wrote Parade and The Bridges of Madison County, also outstanding scores awash in soaring passions. Like the work of William Finn, Adam Guettel and Michael John LaChiusa, it’s very hard to describe precisely how Brown’s songwriting differs from their predecessors with the possible exception of Stephen Sondheim while still working within the musical theater framework. Jazz, R&B, pop, gospel and some unique indefinable genre create a sound light-years from Jerry Herman and even Andrew Lloyd Webber.

But he is perfectly served by this quartet of singers who rip the heart of the songs out of their own guts and lay them on the altar of the stage. When they open the show with the title song, a tidal wave of youthful hope and eager anticipation nearly drowns the audience. Even when they are supporting a lead singer, they are completely committed to and living inside of every moment as exemplified by their bodies rocking to the music. Their vocal work seamlessly melded together was led by musical directors Phil Hinton and Paul Reekie.

The dancers are equally invested beyond just presenting steps. The faces of Taurean DeVoe, Jonathan Eisele, Alissa Kane, Abigail Perl and Emily Tarallo channel the same emotions as the singers, especially Tarallo who exudes a ferocity and intensity.

Marquee, which made a positive impression with its production of Elton John’s Aida last fall, alternates between the auditorium at West Boca Community High School, where Slow Burn Theatre used to perform, and the partners’ own dance studio, Next Level Performing Arts Black Box in Parkland.

The studio was a smart choice for this chamber musical. The production values are minimal; the set is a large blow-up of a black-and-white photograph of the Brooklyn Bridge at night leading into the promise of Manhattan, plus two stair-step units. But that forces the audience to concentrate on the performances, music and lyrics, as well as allows us to see every facial expression.

The drawback of a bare bones production – and it is usually staged that way – is that there are no clues other than the lyrics to provide specific visual contexts in sets or costumes that would help the audience get their bearings in the every-changing milieus of each tale. Doing a little Internet research shows that some songs have a slightly different or at least more specific meaning that these anonymous settings can convey.

It only runs one more weekend; you’d be well advised to interrupt the parade of parties for this celebration.