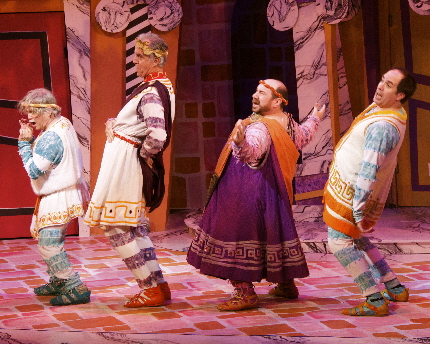 Ken Jennings, left, and Michael Ursua, right, leads a group of lascivious citizens in praising the glories of having a main in The Wick Theatre’s A Funny Thing Happened On The Way To The Forum / Photos by Amy Pasquantonio

There’s only one reason that A Funny Thing Happened on the Way to the Forum has held onto its longevity in the pantheon of great American musical theater – legendary Broadway composer Stephen Sondheim wrote the music and lyrics. Otherwise this musty old chestnut would be locked away in a crypt somewhere.

The show had its Broadway opening in 1962 and received six 1963 Tony Awards. It was made into a movie in 1966, revived in 1972 starring Phil Silvers, and revived again on Broadway in 1996, starring Nathan Lane. Mickey Rooney played the lead in a touring production in 1987. Countless community theaters, colleges and high schools have staged productions of Forum. The musical opens at Boca Raton’s The Wick Theatre and Costume Museum for its third season.

Perhaps all the antics in the 53-year-old play should be taken tongue-in-cheek. No doubt, because it’s set in Ancient Rome, it slightly takes the sting out of a sexist plot that involves non-stop tomfoolery where lecherous men ogle courtesans (a.k.a. prostitutes), a soldier pays a hefty sum to ensure his mail-order bride is a virgin, and a married man past-his-prime man hopes to seduce the virgin before his wife returns from the country.

Women in Forum are either screeching shrews or one-dimensional simpletons that are only good for one thing − well, maybe two if you listen to the lyrics of one of the catchier showtunes, Everybody Out To Have A Maid – “Everybody ought to have a working girl . . . a lurking girl . . . someone to hire when you’re short of help, to offer you the sort of help, you never get from a spouse.” Looking past the content, it’s best to appreciate that this was, in fact, the first musical where Sondheim wrote the music as well as the lyrics. It’s interesting insomuch as he begins to show shades of his rhythmic meter that appear in later lyrics − Sweeney Todd and Into the Woods.

Forum follows the story of a slave, Pseudolus (Ken Jennings), who finds that his ticket to freedom can be obtained by helping Hero (Christopher Brand), the son of his master, Senex (Michael Scott) and mistress Domina (Erika Amato). Hero wants Pseudolus to get him the girl next door – a purchased virgin courtesan, Philia (Whitney Winfield). She’s been promised to Miles Gloriosus (Jim Ballard), the soldier who is en route to claim his prize. There’s a henhouse next door to the house of Senex, where Marcus Lycus (David Setteducati), the buyer and seller of courtesans, conducts business. On the other side of Senex’s house lives Erronius (Troy Stanley) who has just returned from seeking his two children stolen by pirates. Trying to keep everything in check is Senex and Domina’s slave-in-charge Hysterium (Michael Ursua).

What may have made this production of Forum more than a dated relic would have been to heighten the farce and hit the funny bone with not just a wink to burlesque and vaudeville. Book writers Burt Shevelove and Larry (M*A*S*H) Gelbart intended an eye-popping nod to the wacky, baggy-pants entertainment of yesteryear.

Director Bob Walton misses the mark. While he has his actors go for laughs, what’s missing is the Three Stooges, Marx Brothers-esque outrageousness. This Forum lacks the sock-‘it-to-’em that it needs to create the necessary ridiculousness that would pardon its sexism. Meanwhile, the pacing is off as the production’s musical numbers serve as scene segues rather than their necessary function, which is to keep piling on more and more of the madcap zaniness.

The cast hangs together well as an ensemble with Jennings as Pseudolus, who is also the wacky narrator of the play, leading the charge. The seasoned actor – Jennings was the original Tobias in Sweeney Todd on Broadway − has a bit of fun tossing in ad libs here and there. When a bit of stage business gave him trouble (Pseudolus is supposed to pull a book of potions from Hysterium’s trousers and the book wouldn’t budge) at Sunday’s matinee, Jennings broke the fourth wall and let the audience in on the mishap, turning it into an in-character gag.

Ballard did the same with an appropriate ad lib when an audience member shouted out the final word of a line of dialogue. Rather than ignore it, he acknowledged it, creating a comedic moment. Ballard effectively hams it up as the vain Gloriosus, especially in his showstopping Bring Me My Bride, which hit a high note as the Act One closer.

Scott as Senex plays the role of the old man readying himself for the virgin with befuddled charm. Amato as Domina makes the most of her brief scenes and her lively Act Two song opener, That Dirty Old Man, has kick.

Setteducati plays Lycus with a deliberately devious bent. Ursua as Hysterium is fittingly high strung, but misses more than a few moments where he could steal the spotlight away from Pseudolus. Brand plays Hero a bit too understated, never really convincing that he’s hellbent on being married to Philia. His delicate rendering of Love, I Hear, however, is endearing. Winfield as the virgin has the difficult task in bringing to life a character that is given little dimension, but she imbues Philia with a mercurial temperament that at least offers some depth. Stanley’s interruptive shuffle as Erronious gets a laugh every time.

The Sunday afternoon audience certainly enjoyed the show (the lower bowl of the theater was full, but the upper seats of the auditorium were empty). The Wick fills a musical theater void that was missing in Palm Beach County and it knows what will get ticket buyers to become season ticket holders – familiar musicals. This Forum will entertain the masses, but more verve and vaudeville is needed to get this toga party started.

A Funny Thing Happened on the Way to the Forum plays through Nov. 1 at The Wick Theatre, 7901 North Federal Highway, Boca Raton. Performances 2 p.m. Wednesday, Thursday, Saturday, Sunday; 7:30 p.m. Thursday-Saturday. All parking is complimentary valet. Running time is 2 hours including one intermission. Tickets $70-$80. For tickets, visit www.thewick.org or 561-995-2333.