Fresh Look At Fiddler Ditches Some Traditions, Keeps Others 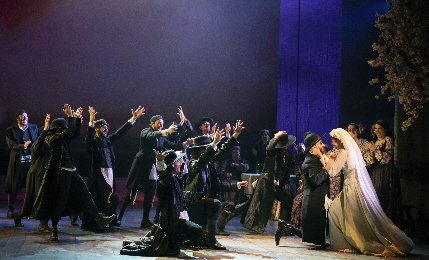 First, there’s the theater tradition that’s inherently been built in to Fiddler, especially in the typecasting of milkman Teyve. Audiences have come to expect a leading man based on the original actor, rotund Zero Mostel, whose Teyve seemed like more of a grandfather to me than a man who would have five daughters under the age of 20. Even Harvey Fierstein’s Teyve seemed to follow Mostel’s playbook.

Ok, so when you’re staging a new 2019 national tour of the 1964 enduring and endearing musical, let’s first toss that tried-and-true out the window. That will give it a different kind of girth.

Yehezkel Lazarov plays a skinnier, younger Teyve, and one with a persistent wink and a heaping dose of comedy. When he’s kibitzing with God and quoting from the Good Book, it’s almost like he’s dusted off a set list of Henny Youngman jokes. Lazarov, an Israeli actor and director, brings a freshness to Teyve – sometimes too fresh, though, relying on the comedy to carry the character. In Act II, the depth comes in, and it’s finally a nice balance of dark and light, bitter and sweet, dissolution and compassion.

And that’s also a good description of director Bartlett Sher’s fresh approach to Fiddler. On the lighter side, he opens with a modern-dressed man reading a book. Maybe it’s a modern relative of Teyve’s reflecting on his ancestry. It comes full circle at the show’s close when the man appears again.

But Sher doesn’t take the tradition-heavy messages lightly in the musical adapted from Yiddish writer Sholom Aleichem’s stories, including “Teyve and His Daughters.” The modern feel falls away and we are now in 1905 in the small Russian village, Anatevka, where Teyve sweats and toils as he’s forced to drag his own delivery cart after his horse is injured.

He has five daughters he must marry off – Tzeitel (Mel Weyn), Hodel (Ruthy Froch), Chava (Natalie Powers), Shprintze (Danielle Allen), and Bielke (Emerson “Emmy” Glick). The hope for Teyve and his wife, Golde (Maite Uzal), is that the matchmaker, Yente (Carol Beaugard), will find rich husbands for the girls, and put an end to their parents’ poverty. Tradition, just like in Teyve and Golde’s case, is that the match is made for everything but love — love comes later.

When successful butcher Lazar Wolf (Jonathan Von Mering) calls on Teyve to meet him at the pub to discuss a transaction, Teyve thinks the butcher wants his best milk cow. But Lazar has eyes for daughter Tzeitel.

When she breaks the news to her father that she’s in love with Motel the tailor (Jesse Weil), Teyve is forced to make a choice—tradition or love for his daughter. It sets off a domino effect as his next daughter finds her own true love with a visiting student revolutionary Perchik (Ryne Nardecchia), while the next wants to break tradition by marrying a Russian soldier, Fyedka (Joshua Logan Alexander).

Standouts in this supporting cast are the daughters and their beloveds. Weil’s nebbish tailor is full of physicality and takes the song Miracle of Miracles to new heights. Weyn’s heartfelt expression of gratitude and love for both her father and her husband-to-be is genuinely touching. Froch’s Hodel has her moment in the beautiful sung Far From The Home I Love. Powers is naively cute as the innocent Chava, who is the one that breaks the most away from tradition.

Uzal as Golde is the first Hispanic actress to play the role of the headstrong wife and mother. Born and raised in Madrid, Spain, she now lives in New York. Her Golde lacks any underlying softness, instead is stern and cold throughout. Golde, yes, should be the traditional rock, but hard as stone? There’s a slight glimpse near the end of the Second Act.

Israeli choreographer Hofesh Schechter infuses the show with folk and traditional dances. One of the highlights of some of the most beautiful dance moments arrives in the second act as Teyve recalls his younger daughter Chava. Schechter brings down a scrim to create a dreamlike atmosphere. Three girls in traditional dress tell the story of a girl becoming a woman in fluid and soft gestures.

There are other wonderful choreographic moments, but this Fiddler is not without its flaws.

The amazing Bottle Dance, always a highlight, this time didn’t mesmerize. Perhaps it is because the magic is lost when you can decipher that the glass bottles aren’t being balanced at all but rigged to stay atop the hats. So, there was really no balance skill needed at all. (This is what happens when you sit too close to the stage – the same as watching a magic show, I suppose.) And the fiddler never actual plays on the roof. In fact, this fiddler doesn’t play at all, which seems to dilute the metaphor when Teyve says, the fiddler is “trying to scratch out a pleasant simple tune without breaking his neck.” He’s a metaphor for the strength of tradition, but often unbalanced on the roof, he can easily fall. But he isn’t on the roof nor playing — the sound is coming from the orchestra pit. Why not a real fiddler? Why not a small incline upstage?

Teyve’s Dream seems to be part of another show, a Cirque du Soleil-ish spectacle with giant Julie Taymor-esque figures on stilts. It’s extravagant alright, and oddly overdone, but let’s give it a hand for originality.

But back to what does work.

Michael Yeargan’s design thankfully stays away from the sets du jour, meaning  projections, and relies instead on minimalistic pieces such as cutouts of lighted houses hung from the fly system.

The minimal set design keeps the focus on the wonderful book by Joseph Stein and Jerry Bock’s timeless music, which had the audience singing along to tunes that have become part of American culture: Sunrise, Sunset; Matchmaker, Matchmaker; and If I Were a Rich Man.

That’s the tradition of Fiddler, those gorgeous songs, that wonderful story, and a timeless treasure that deserves this fresh and refreshing look.

Fiddler on the Roof runs through March 3 at the Broward Center for the Performing Arts, 201 SW Fifth Avenue, Fort Lauderdale, as part of the Broadway Across America series. Performances are 8 p.m. Tuesdays through Saturdays; 2 p.m. Saturdays; 1 p.m. and 6:30 p.m. Sundays. Runs 3 hours including one intermission. Tickets are $35 to $125. For tickets visit www.browardcenter.org; by phone 954-462-0222.

This entry was posted in Performances, Reviews and tagged Broadway Across America, Fiddker on the Roof. Bookmark the permalink.