GableStage’s If I Forget: Powerful Tale of Family Strife Over Cultural History 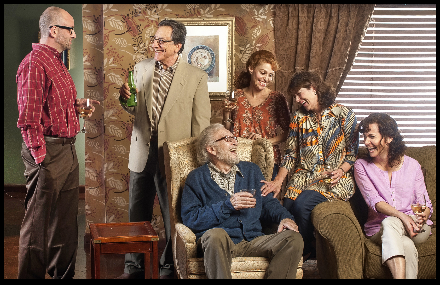 Raging family dysfunction played against an equally volatile backdrop of social upheaval makes for two seemingly separate but brilliantly acted and directed plays united in GableStage’s production of If I Forget.

If I Forget is the emotional equivalent of a skiff tossed about in a raging tempest in the middle of a wintry ocean.

If, in fact, Steven Levenson’s script has a bit of trouble making clear the intended analog between the two facets, the enthralling production helmed by Joe Adler and a cast at the top of their considerable game challenges both the mind and the heart.

Levenson does not provide answers, but he asks a half-dozen trenchant questions centered on modern day Jewish-Americans — topics easily applicable to any group struggling how or even whether to embrace its historic cultural identity.

In broad strokes, the grown siblings in the upper-middle class Fischer family have gathered at their elegant home in Washington, D.C., in the summer of 2000 to figure how to cope long-term with their aging father’s debilitating illness. Outside their well-appointed walls, the once promising Mideast peace talks are crumbling and sectarian violence is escalating.

Everyone has secrets and enough unlatching baggage to fill the hold of a 737. So while this family is bound with love and shared history, everyone is on edge with a Jekyll-and-Hyde passive aggressiveness — reviving decades-old grudges while still striving to be supportive.

But each sibling’s angers, resentments and private problems collide when the most obvious solutions prove mutually exclusive. Some answer must be found because fast-forwarding to the winter of 2001 the father, once a vital haberdasher in a predominantly minority neighborhood, has deteriorated to needing very expensive full-time care.

Much of the second thread in the play emanates from the brother Michael, a brilliant Jewish Studies professor on the cusp of tenure and giving a final edit to his new devastatingly controversial book. The short version of his thesis is that American Jews have been become de facto secularized, abandoning their historic social activism along with their ancient culture. But as their wealth and influence grew in the past decades, politicians and powerbrokers have enlisted their resources on socio-political issues centered on Israel.

To do this, Michael contends, these exploiters have maneuvered the Jews by blithely invoking the specter of the Holocaust as a rallying point and knee-jerk call for support. In doing so, the Holocaust has become a mechanism for manipulation and, over time, the sole effective facet binding modern American Jews to the exclusion of most else.  Michael suggests metaphorically that Jews “forget” the Holocaust if it is being used for less altruistic purposes.

In the months between the two acts, just the hint of such a book eventually costs him his career, reputation and finances already stretched by the need to care for an emotionally troubled daughter.

Michael’s incendiary tirades to his family are razor incisive criticism worthy of weighing; he asks how much modern/Americans have jettisoned their fidelity to the history and past – and he even questions whether that past has the worth it is traditionally invested with.

In the closing scenes, the siblings have to make a crucial decision that would ensure care for their father but cost them a significant piece of their own heritage.

But Levenson is not easily siding with their decision. His title refers to Psalm 137 uttered by the Jewish exiles in Babylon: “If I forget thee, O Jerusalem, let my right hand forget her cunning; If I do not remember thee, let my tongue cleave to the roof of my mouth….” He sees value in a past that has been so easily lain aside and he has one character ask metaphorically “What is my inheritance?”

This production’s recreation of siblings and spouses debating present-day politics and sparring about ancient familial injuries is simply stunning in its detail, its rhythms and naturalism. Anyone from a decent-sized family will recognize the jockeying alliances and easy use of obscenities. Light-hearted and supportive one moment camaraderie, the next playing those hurtful cards that only family members know exist.

Most of these actors have played together before and there is not just chemistry, but the smooth interaction of people who know their partners will catch them if they do a triple-flip on the trapeze.

And no one but no one in South Florida, maybe anywhere, can rivet an audience’s attention like Adler can just by putting people together around a table or sitting together in an upstairs bedroom or lounging across a living room.

The central character is Michael, inhabited so completely by Gregg Weiner as a pragmatic academic consumed with the cold truth he perceives. With passion that racing downhill like a runaway train, his Michael careens through long but crystal clear and transitorily persuasive speeches outlining his vision.

Ame Livingston, an Orlando-based actress, is completely believable as his wife, Ellen, an outsider both in religion and as someone not tied into the family by blood. She walks a fine line of involvement as a would-be peacemaker with humor and compassion yet often aghast at the depth of the toxic sibling rivalry.

Patti Gardner instantly reminds the audience how skilled she is at creating what seems like the neighbor next door, but who has an edge and is deftly adept at enlisting others in her schemes.

Once again, Margery Lowe creates a troubled creature, the youngest daughter who has been taking care of dad almost full time and who nursed their fatally ill mother through a similar illness not too long ago. The heart-wrenching agony that her Sharon undergoes as the siblings battle over whether to preserve their heritage is excruciating. In a career of fine performances, this is one of her best.

David Kwiat, the bedraggled hobo in The Caretaker, provides in Holly’s lawyer husband another outsider uncomfortable to be surrounded by the family strife and always seeking a neutral noncommittal to preserve harmony.  Matthew Ferro plays Holly’s sullen teenage son.

Finally, George Schiavone is all too convincing as the 75-year-old patriarch who remembers being part of the American forces freeing Dachau. For him, the Holocaust is not some textbook abstraction. Later when he has a paralyzing stroke, his inert husk with dead eyes is unnerving.

The triumph here is the perfectly staged, perfectly paced, perfectly portrayed family dynamics, replete with tensions and anxieties all changing moment to moment, second by second. Themes aside, this is about as good as acting and directing get.

Levenson’s script is written with marrow and spleen, especially in Michael’s tirades about modern Jews. For instance,

“And we’ve been manipulated, all of us, our entire lives, to feel constantly victimized, constantly afraid. You hear it all the time: “It could happen again, never forget, because it could happen again… (But) it already has happened again. It happened in Bosnia, it happened in Rwanda. It just didn’t happen to us. We learned all the wrong lessons from the Holocaust. We learned that the world hates Jews, that the world will always hate Jews, instead of what we should have actually learned – that nationalism is a sickness and it is lethal. And the book argues that the only way we can escape what has essentially become, at this point, a religion and a culture of frankly death and death worship, a culture that finds its meaning and its reason for being in the charnel houses of Europe, the only way we can get past that is if we forget it.”

The current season of local theater, has been a phenomenally rare confluence of excellence. Just a reminder: The Secret Garden, The Bridges of Madison County, The Elaborate Entrance of Chad Deity, Wrongful Death And Other Circus Acts, Hairspray, Straight White Men, Newsies and Billy & Me. There have been some misfires and some just average productions, of course. But we’ll say it again and again: If we graded productions on a numerical scale, the average production would not reach the quality of the average production in Chicago or D.C. with their larger budgets and deeper bench. But when South Florida is doing its best work, it rivals anything anywhere. Add If I Forget to the list.