Go Find Your Grail With Arthur & Company At MNM’s Spamalot 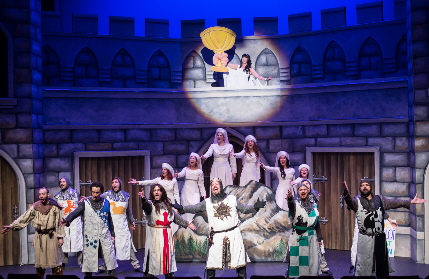 The full cast of MNM’s production of Monty Python’s Spamalot finds their grail .

The MNM production of Monty Python’s Spamalot is silly and stupid.

This edition of one of the funniest musicals of the past couple of decades revels in, savors, exults, wallows in the anarchic wacky vibe enshrined in the source material, the film Monty Python and the Holy Grail.

But this sixth production we’ve seen – including two others locally – underscores how the musical itself has become a reliable warhorse on its own merits. Just as the fans of the 1975 movie cheer the Knights Who Say Ni when they appear before them live, they also welcome back the John Du Prez and Eric Idle songs written for the 2005 musical such as “You Won’t Succeed On Broadway (if you don’t have any Jews).”

The film’s material reworked by Idle, Du Prez and original director Mike Nichols is so strong that you don’t have to be a Python fan or have memorized the film to enjoy it – although familiarity certainly helps explain why some people are laughing hysterically in self-validating recognition if you aren’t.

The other quality of the material so clear in this production directed and choreographed by Kimberly Dawn Smith is the copious opportunities for each edition to insert its own riffs, crafted asides and unscripted ad libs to make each company’s viewing a fresh experience even while ticking off the required set pieces. Therefore, even if you’ve seen the show before and before and before, this one like the others has its own take – sort of how classic companies put their own stamp on Shakespeare.

For instance, the show on Broadway and on tour exuded a high polish of precision even as it mercilessly lampooned Broadway tropes and conventions. But while Smith, musical director Paul Reekie and their enthusiastic cast likely rehearsed most of the show tirelessly, their evening has a welcome loose cannon feel to it so that the audience senses there’s no telling what will happen next. From the leads to the ensemble, from the creative designers to the indefatigable backstage crew, these people are having a blast and want you to feel the same way.

It would be a waste to summarize the plot for most musical theater fans. But for the benighted souls living in a cave for 42 years, it’s an uber-irreverent raunchy and scatological parody of the Arthurian legend, following the hapless king and a coterie of bizarre knights on the quest for the Holy Grail. The film echoed the intentionally nonsensical ethos of the British television series with daffy characters, situations and catchphrases that have become embedded in pop culture but which must seem head-scratching gibberish to the unenlightened.

Idle, Du Prez and Nichols transformed that into a secretly well-constructed Broadway musical. They created production numbers such as the Camelot in Vegas extravaganza, and added The Lady of the Lake (and her Laker Girls) as a world-class musical theater diva who could belt out power ballads.

Smith and company have joyfully tweaked the show over and over from gigging the Carbonell Awards to someone shouting “Make Camelot Great Again.” They changed lyrics and music to echo the musicals Company and La Cage aux Folles, then have someone mutter asides that those are shows on MNM’s upcoming schedule.

But amping up the impromptu feel is how the cast is reacts and riffs anew to audience reactions. If some of these bits may well have been planned, most don’t feel that way.

The linchpin is Johnbarry Green whose regal baritone for Arthur is knowingly undercut by his aura of a politician a shade out of his depth. Green has experience elsewhere but is new to the region other than (go figure) appearing in Empire Stage’s The Jackie Mason Musical. He sets the tone in his not-quite deadpan moments like ending a speech by letting Excalibur hit the floor and exclaiming with a smile, “Sword drop.” 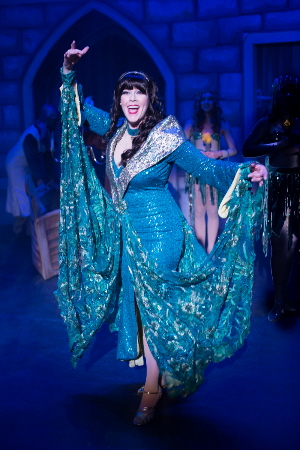 Laura Hodos as The Lady of the Lake

Right behind is Laura Hodos, one of the state’s best musical actresses, whose clarion voice, flashing eyes and 1,000-watt smile command the stage any time The Lady of the Lake appears. She and Reekie frequently have her singing a song full out with seeming heart, only to utter the next line with a giddily snarky delivery.

The fine cast and ensemble is large although not as large as it looks because six chameleonic actors superbly double, triple and quintuple in other roles: Mike Westrich primarily as Galahad, Sahid Pabon as Robin, Pierre Tannous as Belvedere, Joshua McKinney as Lancelot, Michael Scott Ross as Herbert, and especially rubber-faced Andrew Shultz (co-founder of Marquee Theater Company) as the woebegone servant Patsy who powers the song-and-dance celebration “Always Look On The Bright Side of Life.”

The staging and choreography by Smith is endlessly inventive as if Susan Stroman had been crossed with Charlie Chaplin. She also seems to have curated countless bits of business discovered in rehearsals by the cast. She makes the whole thing feel like a group endeavor.

Reekie has molded the vocal performances and led the lively kicking-it band who seem to be having as much fun as the cast: Karen Nagy, Sandi Hagood, Rick Kissinger, Doug Michaels, Seth Merlin, Tom Stancampiano and Jason Pyle.

The impressive three-story castle set by Cindi Taylor is lit by Jayson Tomasheski. The show requires an endless need for off-beat props which was amply satisfied by Casey Blanton and Matthew Tarantino. Leslye Menhouse coordinated the wonderfully satirical costuming, much of it rented from Costume World. The backstage crew of Angel Wrona, Brittany Shearin and Leslie Wolfe must have sweated off considerable pounds helping actors change costumes and locate props.

Spamalot is the first show of the fledgling MNM Productions’ new season now officially ensconced at the Rinker Playhouse at the Kravis Center. The company could not ask for much better a lark of demented lunacy.