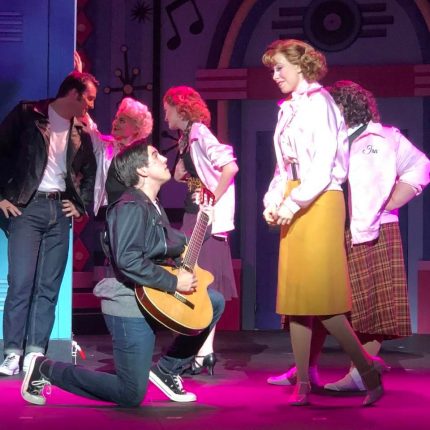 Grease certainly is the word as the classic rock ‘n’ roll musical glides its way into a solid staging as the first joint production of MNM Theatre Company, North End Theater Company, and the City of Lauderhill. Add also the words energetic, entertaining and engaging as Grease’s enthusiastic cast takes its audiences back to the tunes and attitudes of 1959, as the musical runs through Jan. 30 at the Lauderhill Performing Arts Center (LPAC).

The 1950s vibe begins as soon as the theater doors open with Larry Buzzeo as disc jockey Vince Fontaine warming up the crowd with songs of the era. Buzzeo is in his element as his pre-show patter gets the crowd clapping and singing along, ready to turn back the clock for a couple of hours.

Grease is the story of teenagers—the girls are the Pink Ladies and the boys are T-Birds—in their senior year at Rydell High School. Compared to what teenagers go through now at high school, Grease gives us a sanitized view as it spotlights the various students.

At the center of Grease is the love story between Danny Zuko (Dorian Quinn) and Sandy Dumbrowski (Jessie Dez) who met and fell in love during the summer break. Sandy was supposed to attend a Catholic school, and Danny told her he attended a private academy. But here they are at Rydell. The two have different stories to tell about how that romance progressed in the song “Summer Nights.” Danny doesn’t want to admit to his too-cool buddies that he really cares about Sandy, so this romance isn’t smooth.

Director Jonathan Van Dyke, who doubles as choreographer with Angela Morando Taylor, has assembled a cast worthy of the show. The actors are obviously having a fun time and this translates to the audience in every scene.

Eytan Deray makes the most of his role of nerdy Eugene, who no doubt will grow up to be a success. Deray makes us wish this character had more time on stage. Likewise, Kat Gold, who recently sparkled in Slow Burn’s Kinky Boots, brings that same effervescence to bubbly Jan. We’d like to see Deray and Gold in more productions as both have a talent that continues to impress.

The ensemble cast keeps the Grease spirit going. Ashley Rubin channels Carol Burnett as Frenchy who wants to attend beauty school, though she’s particularly talented at it. Acerbic Rizzo (Jordan Gonzalez) has good chemistry with her sometimes boyfriend and car enthusiast Kenickie (Ryan Michael James). Meg Frost makes a lively impression as the romantic Marty, who pines after a Marine who sends her gifts. Dance captain Alexandra Dow shows off her kicks as Cha Cha Di Gregorio. Michael Harper as Roger, Michael Materdomini as Sonny, Brian Piedra as Doody are each amusing as those bad boys your Mom warned you about.

Songs “Greased Lightning,” “We Go Together” and, of course, “Grease” are standouts. A different approach works well on “Beauty School Dropout” with an outstanding Teen Angel heavenly played by Jennifer McClain. The actors in this scene were a hoot.

This is the second time MNM has mounted the stalwart musical—the first being in 2018 at the Rinker Playhouse at the Kravis Center for the Performing Arts in West Palm Beach. (To read a review of that production click here.) MNM’s new home at the LPAC is one of the loveliest theaters in Broward, but sound problems apparently are ongoing. At times, the singing was crystal but occasionally the sound needed adjusting as the singers were overwhelmed by the terrific band, under the helm of always on point musical director and conductor Caryl Fantel, accompanied by Wes Anthony and Frank Capoferri (saxophone); Greg Minnick (guitar); Rupert Ziawinski (bass) and Tim Kuchta (drums). This has happened before at the LPAC and may be a problem of the arts center.

Grease was to have opened on Jan. 14 but had to be postponed a week. But the audience’s fervor did not abate for Grease, which made its debut as a stage musical in 1971 before making its transition to the movies in 1979. We spotted several women, teenagers and girls sporting Pink Lady jackets (they got them on Amazon, one group told me) and several young women, including my young companion, were rocking leather pants and jackets and high heels.

Despite its postponement, this production of Grease won’t be extended as MNM is already planning its next show, Sister Act (Feb. 18 through March 6). Grease is still the word.

Grease will run through January 30 at the Lauderhill Performing Arts Center, 3800 NW 11th Place, in the Central Broward Regional Park on the Northeast corner of Sunrise Boulevard and State Road 7. Running time is two hours with a 15-minute intermission. Performances are 2 p.m. Jan. 26, 29 and 30; and 7:30 p.m. Jan. 27, 28, 29. Tickets are $45 to $65 and are available online at www.lpacfl.com or by calling 954-777-2055. Subscriptions to the Broadway at LPAC series (Sister Act Feb. 18 through March 6, and Guys and Dolls, April 1 through April 17) are also on sale, and various subscription packages are available.

COVID Protocal: Masks are required when attending any event at the Lauderhill Performing Arts Center.