Ground Up And Rising’s Dying City Struggles For Clarity, But Has A Solid Performance 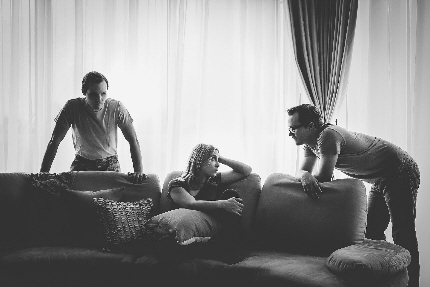 The ultimate themes and intended resonances of Dying City dance just out of intellectual reach in Ground Up and Rising’s brave but flawed production, but the audience gets some reward sifting through the intriguing confusion as they seek graspable meaning.

Christopher Shinn’s 2007 play, ironically, is said to be about the difficulty of making human connections and perhaps the uncertainty of knowing someone. But its only thinking about the play on the ride home that much of what Shinn was trying to do begins to slip into a still fuzzy but clearer focus. It almost makes you want to see it again to reevaluate the jigsaw pieces.

The good news is that it gives audiences another chance to chart actor Christian Vandepas’ slow but steady emergence as an actor to watch.

The play opens in the summer of 2005 in New York City where war widow Kelly (Valentina Izarra) is packing up her apartment. Unexpectedly, she is visited by Craig (Vandepas), the twin brother of her husband Peter who died in Iraq a year earlier. The Army says he accidentally shot himself in the head, but Craig implies that something much darker is likely.

The nervous banter and uncomfortable byplay indicate something is very off-kilter. The overly chatty Craig, a flamboyantly gay actor, has just walked out on a role in a play, as well as his longtime boyfriend. A laconic Kelly is decidedly shut down emotionally. She is trying to be polite but wishes Craig wasn’t here. Both have avoided each other since the funeral.

Throughout the play, time often shifts back to 18 months earlier on the last evening the three were together, with Peter (also played by Vandepas) preparing to ship out to Fort Benning the next day and then to an unrequested second tour in Iraq.

Secrets begin to tumble out, fueled by the content of emails that Peter sent Craig exchanged in the months before his death. It’s never quite clear why Craig feels compelled to share them with Kelly. But the reason for Kelly’s reticence to read them not only comes clear in the penultimate scene; the emails contain a horror much worse than even she imagined.

This highly-acclaimed script is a complex labyrinth of mirrors that artistic director (and talented actor) Collin Carmouze never quite solves although he clearly is working hard to lead us through the maze. Not only are the characters lost, but the audience is as well much of the time.

Shinn indulges in this highly theatrical trick in which the twin brothers are played by the same actor. This is underscored by some creaky mechanical excuses for the actor to go offstage and change clothes. Doubtless, Shinn has thematic intentions here which aren’t made clear in this production. Are these two men incomplete sides of a whole person? That’s just a stab in the dark.

But to prevent it from seeming a trick for its own sake, the actor playing both parts must create and switch effortlessly between two distinct personas. Fortunately, Ground Up has Christian Vandepas.

Over the past few years, Vandepas has impressed audiences with varied and increasingly assured roles, most amping up the electricity on stage whenever he appears. He started being noticed in supporting roles in Slow Burn Theatre Company’s Sweeney Todd, Avenue Q and Parade. He delivered a quirky paternal bartender in Savage in Limbo and then set this same stage on fire as the agonized psychotic soldier in 9 Circles a few months ago.

Here, he alters his voice, body language, demeanor and impossibly seems to morph his face microscopically to create divergent characterizations whose only commonality seems to be his physical being. His Craig certainly has some classic (if not stereotypical) bubbly and fussy mannerisms, but Vandepas makes them organic and credible. His portrayal is so convincing that when he finally appears as the deeply troubled soldier Peter, it’s actually a bit of a shock that what we have seen of Craig has been acting. There’s a breakout role waiting for Vandepas somewhere.

Shin wrote a tougher challenge for Kelly. Izarra, who was admirable in Alliance Theatre Lab’s Savage In Limbo and Ground Up’s Gruesome Playground Injuries, has shown she needs some meaty emotion for her performances to succeed; she has difficulty investing an inner life when she is burdened with a mostly deadpan role like this one.

Izarra is forced to spend much of the show with a dull, dialed down affect. Kelly is so shielded against her own feelings as well as interaction with the outside world that she comes off mostly as a sad brooder, especially compared to the extravagant Craig. As a result, her Kelly seems like she is just floating through the play. This may be faithful to the script, but it leaves Vandepas with not much to play off of — or for the audience to connect with. It is only when Kelly erupts in tears or anger that Izarra shows what she can do.

It’s telling that in this production even the title seems to have no connection to the meat of the play other than it being set in post-9/11 New York and thereby casting a pall over everything.

Dying City runs through Sept. 28 from Ground Up & Rising, performing at Artistic Vibes, a warehouse space at 12986 SW 89 Ave. in Miami near the Falls Shopping Center. 8 p.m. Saturdays and 2 and 6 p.m. Sundays. Runs 85 minutes, no intermission. General admission is $25, but free to patrons under 25 years old with government-issued ID. Cash only at the door. Visit groundupandrising.org.