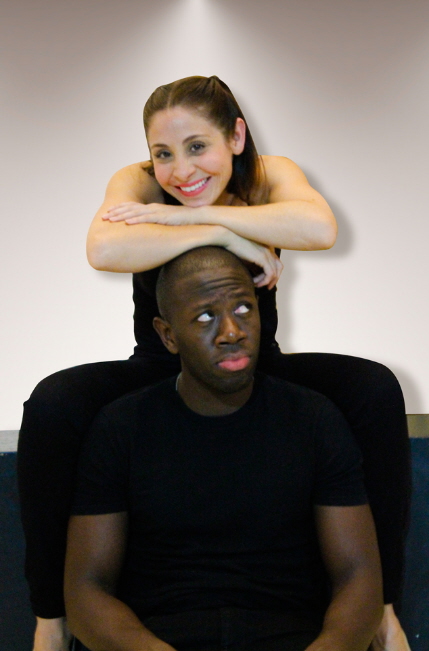 The old joke goes “How do porcupines make love? Very carefully.” In Ground Up and Rising’s sad and ultimately moving production of the somewhat murky script for Gruesome Playground Injuries, the answer may be “not at all.”

The extreme difficulty of forging relationships among emotionally wounded people is at the heart of this decidedly off-beat, oddly-made play. It frustratingly ends with no resolution yet leaves the audience awash with compassion and pity for the human condition.

Up-and-coming Pulitzer finalist Rajiv Joseph presaged his acclaimed 2011 Broadway hit Bengal Tiger in the Baghdad Zoo with this strange portrait of a man and a woman’s 30-year relationship, starting with their meeting in the school nurse’s office when they are eight years old.

Over eight scenes each separated by several years, the relationship of Dougie (Sheaun McKinney) and Kayleen (Valentina Izarra) swerves and weaves, as close as the strands of a DNA helix yet never quite connecting. These deeply damaged people are capable of something profound they don’t dare call love, but are too gunshy of further emotional anguish to have an open-hearted romantic link.

There is little or no character arc, much like the current The Sons of the Prophet and last season’s 4000 Miles at GableStage. No one learns anything or even changes. All three are static portraits of a single facet of human existence.

Joseph, though, adds two curveballs. The first is that both protagonists have a surreal almost comic predilection for getting seriously injured and a fetishist fascination with their physical wounds. Each vignette features one or both recovering from a recent mishap. The injuries are almost always self-inflicted, such as losing an eye in a fireworks accident or in self-destructive cutting. The precise intent of this metaphor is either surprisingly blunt or indecipherably subtle; it’s hard to know which.

Joseph’s second fillip is that scenes ricochet back and forth out of chronological order, as if time has been fractured and put back together ineptly. The resulting God-like omniscience stokes our compassion for what we know will be their lifelong confusion, ambivalence and pain. Even with a classroom whiteboard announcing their ages and locations between each scene, this shattered arc is difficult to follow. But the trick is just to sit back and let it wash over you. By the time they get to the last scene – finally one occurring in chronological order – Joseph’s vision will be clear.

That’s credited directly to the director Arturo Rossi, co-founder of this ragtag shoestring company performing around Miami. He knows where this play means to go and deftly adds brushstrokes all evening until he completes the portrait. He’s hampered by Joseph’s script which is so elliptical and often too prosaic to hold the audience’s attention. But the show still carries a slow-moving wallop because of him and his cast.

Another of Rossi’s skills is how, quite unobtrusively, he places the two characters in an endless array of tableaus and how he moves them around the set. This is crucial to creating some visual variety because to call the set minimalist would be overstating the case. It’s basically two black boxes, a folding chair, the vaudevillian easel and a row of different shoes for each actor to put on in different scenes.

These are difficult roles because the characters as written are too quirky to be completely believable, yet McKinney and Izarra succeed in investing both with a mercurial array of emotions. They excel at plausibly portraying their characters at different stages of their maturation. They are playfully childish one scene, soul-battered adults in the next, and spiky adolescents in the next.

McKinney, a veteran of Ground Up’s troupe, has an imposing muscular, loose-limbed physicality of gentle genial giant, but he has the capability of erupting scorching lava. The sole quibble is that he sometimes speaks a little too quietly and little mush-mouthed. Izarra has a dancer’s grace and emits the aura of a tortured soul who long ago gave up on any hope of a genuine relationship with anybody. As per the script, they don’t exude any romantic chemistry, but there is a sense of kindred spirits cautiously trying to make connections but shying away before consummating emotionally.

Ground Up, created in 2005 as a multi-disciplinary performing arts collective, has been The Flying Dutchman of theater companies, rarely performing in the same location around Miami-Dade County even during a single run. Sometimes, the troupe only has a rough idea of what its season will be and when it will perform. Still, it has delivered some vibrant work, including The Pillowman, Stephen Adly Gurgis’ The Last Days of Judas Iscariot and Jesus Hopped the A Train, On an Average Day and the stunning The Hate U Gave: The Tupac Shakur Story.

The good news is the Dutchman may have found a home port at Artistic Vibes, a one–year-old performing arts space in a warehouse a couple of blocks from the Falls Shopping Center in Kendall. It’s a delightfully quirky little storefront that can host about 50 people in folding chairs and very comfortable sofas. The walls are lined with blackboard material and covered with chalked slogans, messages, signatures and graffiti.

We saw this play at 2nd Stage in New York starring Pablo Schreiber (The Wire) and Jennifer Carpenter (Dexter). While the play had more polish and plausibility there under Scott Ellis’ direction, the work here by Rossi, Izarra and McKinney actually lands a far more emotional punch.

Gruesome, which opened last week, has a very short run: There’s only two more performances at 8 p.m. tonight (Saturday the 28th) and 2 p.m. Sunday Oct. 6. The price of admission will be waived at that second performance if patrons will join a letter writing campaign to help support the One Campaign’s efforts to eliminate extreme poverty in Sub-Saharan Africa by 2030. This initiative is aimed at letter-writing for One’s Electrify Africa Act, a measure that will provide 50 million people in Sub-Saharan Africa with access to electricity.

Gruesome Playground Injuries presented by Ground Up and Rising, plays through Oct. 6 at Artistic Vibes, 12986 SW 89th Street,  Miami (Mapquest or GPS this). Performance at 8 p.m. tonight (Saturday the 28th) and 2 p.m. Sunday Oct. 6. Running time 1 hour 20 minutes with no intermission. Tickets are $15 at the door or visit www.groundupandrising.org/boxoffice.htm.