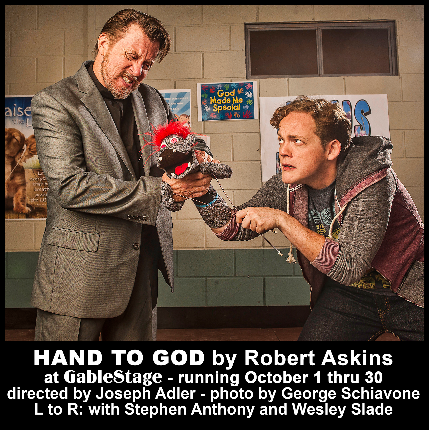 Okay, yes, Hand to God has cute obscenity-spouting puppets having sex on stage, but the similarities to Avenue Q stops dead right there. This scorchingly funny and aggressively irreverent play at GableStage is a pitch black comedy about using the fiction of religion to rationalize and excuse the baser natural instincts of Mankind.

Robert Askins’ play is awash in vulgarities and rough sex (not just the puppets). But its hallmark is the copious nervous laughter it elicits from audiences savoring and repelled by a character expressing his inner demons uninhibited, but escaping judgment by blaming it on a demonically-possessed sock puppet. After all, it’s just actors on a stage acting, not, of course, vicariously fulfilling any of our fantasies of behaving unbridled by social conventions and moral structures.

Director Joseph Adler and a first-rate cast know exactly the absurdist, outrageously satirical tone that Askins is going for and delivers it with full-throttle abandon of a runaway semi racing down an abyss.

To wit: Agnostics argue God is society’s invention to cope with the inexplicable and to instill a self-preserving moral framework. But in Hand to God’s prologue and epilogue, a sock-and-rod puppet with a snaggle-tooth grin and shock of red hair lectures from a Punch-and-Judy stage the other side of that coin: The Devil – perhaps even evil – is an invention to rationalize and excuse the darker side of our nature—what Freud called the id.

This is illustrated as troubled adolescent Jason builds Tyrone the puppet as a project for his even more troubled mother’s subsistence job leading a religious school class in the basement of a church in a suburban Texas town.

But the initially cute Tyrone quickly turns into a foul-mouthed sex-obsessed monster who says and does whatever he want – to the absolute horror of the congenitally shy and repressed Jason. There are simply no limits of any kind to what Tyrone will spew out and act out. Part of the power of the play is the juxtaposition of a cute Muppetlike creature unhinged as he rips off a classmate’s ear or obliterates any kind of political correctness.

But no matter how mortified Jason may be and how everyone believes it’s the puppet in need of an exorcism, Askins makes it clear that Jason (or, more to the point, some facet of him) is operating the puppet and giving it voice.

The resulting anarchy affects the people around Jason in loosening their own strictures: his tightly wound mother trying to emotionally recover from a husband who ate himself to death, a slightly smarmy pastor trying to use the power of his position to seduce the mother, the punkish dysfunctional classmate with a precocious lust for the mother, and a gentle classmate who wants to connect with Jason on a “normal” level. All of them unleash their inner beings in a hilarious set of scenes we won’t spoil.

Adler spotted Hand to God off-off-Broadway several years ago and began a three-year pursuit of the rights, but the play then went off-Broadway and finally became a Broadway hit with Steven Boyer giving a phenomenal performance. (See our review by clicking here.  http://www.floridatheateronstage.com/reviews/performances/report-from-new-york-inky-comedy-hand-to-god-is-riveting-riotous-and-deeply-unnerving/)

In its way, Adler’s edition is actually thematically clearer than the superb Broadway production. In this outing, it is clear that there isn’t really a demonic possession infecting everyone; that everyone including the other characters are merely allowing their inner selves to emerge. On Broadway, the preternatural performance of Boyer actually made you wonder if Tyrone was, indeed, possessed by the Devil – which in retrospect is not what Askins was saying.

That slight confusion was underscored in New York (and reportedly in the current Chicago production starring South Florida native Alex Weisman) in that (spoiler alert for other productions but not this one) when the pastor revisits Jason after locking him in the basement overnight. He discovers that it has been unimaginably ravaged and desecrated in scores upon scores of hilarious but blaspheming ways, a scene of a children’s room turned into a vision of hell. You can’t imagine Jason did this on his own without supernatural help. Perhaps the physical layout of GableStage’s stage logistics made this impossible, but its absence actually helps the playwright’s intent.

Of course, the crucial requirement for all this to work is the actor playing Jason. It can’t be just any fresh-faced actor spending 10 days in rehearsal with a puppet.

Fortunately, Adler hired Wesley Slade, an Orlando performer who was the wigged-out director character in Adler’s It’s Only A Play. Slade had several years of experience with puppets. So working with puppetmaster and fabricator Paul Louis, he engaged the subtle and sophisticated skill set required to make Tyrone a seemingly independent life force even as we see Jason’s arms and lips moving. It’s not just how Tyrone’s head may be facing a particular direction in a specific angle or his mouth may be screwed into a sick smile It’s the use of the rods to make Tyrone’s arms as animated as your own. He drapes his arm around Jason’s shoulder in conspiratorial conferences or flaps his arms like a dragon-like monster flying in the air.

The other piece of the performance is how Slade’s teary-eyed anguished Jason is such a doughy-faced unformed teenager thoroughly appalled by what Tyrone is doing – not just because Tyrone seems to be acting unbidden and uncontrolled which would terrify anyone with this attached to his arm, but because deep down Jason must suspect this revolting persona is really part of him emerging 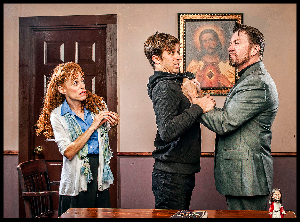 The supporting cast is just as good, especially Margery Lowe as the mother who hilariously comes unraveled. Kudos are due as always to yet another singular diverse portrait by Kristian Bikic as the comical satire of disaffected teenagers, Stephen G. Anthony as the pastor and Casey Sacco as the girl who wants to connect with Jason.

It should go without saying that Adler has helmed this enterprise with his usual skill and insight. Without him, this unrelenting exposure of hypocrisy about our natures would never work.

Hand To God apparently will be the most frequently produced play in regional theaters this season, according to a survey by American Theatre magazine. Besides one currently playing at Chicago’s Victory Gardens Theater starring Weisman, another just closed in Melbourne.

Hand To God brings an outstanding close to one of GableStage’s strongest season that has included Constellations, Stalking The Bogeyman and The Royale.