Have I Got A Girl For You Entertains, But Proves Island City’s Savvy For New Works 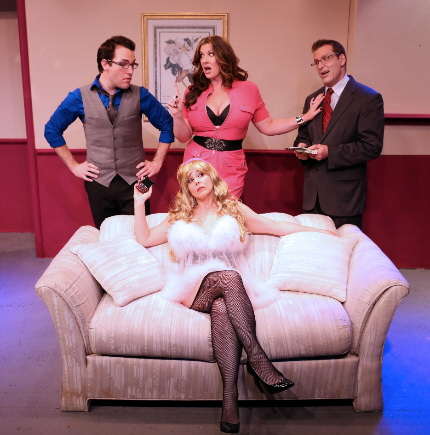 Escort manager Mike Westrich, madame Sharyn Peoples, Larry Buzzeo and hooker Christina Groom are among the strange characters in Island City Stage’s Have I Got A Girl For You. / Photo by Robert Figueroa

The small, yet “can do” Island City Stage swept the Carbonell Awards at the end of March for its production of Dan Clancy’s drama The Timekeepers. Its latest production, Have I Got A Girl For You, while not as groundbreaking as Timekeepers last fall, nonetheless has an originality that shows what this company really can do.

South Florida transplant Josh Mesnik has found the perfect partners in Island City Stage for his play.  Island City Stage has helped to develop the work, which had been only previously workshopped in 2012 at the New York International Fringe Festival. Artistic Director Andy Rogow and Associate Artistic Director Michael Leeds are starting to put an imprint on the local theater community and making a name for ISC as play developers. This recent production yet adds another rung to the ladder.

Based on Mesnik’s real-life experience working at a Boca Raton escort service, Mike Westrich is cast in the role of Josh (yes, Mesnik has changed some of the names, but the lead character’s definitely gives credence to the playwright’s admission that he “writes what he knows.”) Josh is an out-of-work actor who realizes that a community theater production of Into the Woods isn’t going to pay the bills, and that as a recovering addict, working in a restaurant begets too many temptations including plenty of booze and cocaine.

The play’s title is taken from a song from the Broadway musical Company by Stephen Sondheim, and is just the beginning of the multitude of references to theater and classic films peppered throughout the play. The pitches will be fun for audience members who catch the jokes. For those that don’t, they won’t feel left out. The theaterista trivia, including Mesnik’s obsession with the film about theater, All About Eve, just adds another delicious layer.

Westrich brings a frenetic energy to Josh, which is reined in just the right amount in the intimate Empire Stage space. No doubt it served the actor well to have the playwright on hand as he was developing the character. Yet, the actor brings his own nuances to the original role. In almost every role Westrich has played of late (Jon, tick tick…Boom, Pippin, Pippin;  Hans, The Timekeepers, Man 1, I Love You, You’re Perfect Now Change; Ben, Rags , he’s found something different so that there doesn’t seem to be any crutch he’s leaning on. Let’s hope he keeps up the freshness as it is very interesting to watch.

There’s also the presence of talented director Leeds, who is given the gift of a richly humorous and well-paced script. Leeds takes the script and runs with it, yet keeps it contained, ensuring that the action is lively, but not raging out of control, which could happen with all of the zany situations. A fine example of this is the physical comedy that Mesnik builds in, which is a challenge in general, but in the small space makes it even more vexing. However, Leeds utilizes his familiarity with the space (he directed Timekeepers among others here) that he knows how to keep his actors in check so that when the pratfalls set in, they are wildly entertaining, not just wild.

The play has some very inventive constructs, including two supporting actors who are charged with more than a dozen characters between them. Larry Buzzeo and Christina Groom are perfectly cast in these parts that call for quick changes, different accents and moods, and sometimes in a matter of seconds. Buzzeo plays everyone from a frat boy john to Josh’s buttoned up insurance salesman boyfriend.  Groom (Amy Adams-esque in her looks and ways) has her own plate full as a bevy of hookers ranging from the just-off-the-Heartland-bus hooker who Josh names Christmas to a racist Russian hooker to the lesbian whose own escort service shut down because the female johns kept moving in with their escorts and vice versa. Sharyn Peoples, who has been with the production since its initial readings, understands the no nonsense madame and owner of the agency, Gina.

There’s also Mesnik’s device of direct address to the audience as Josh moves stage left to an instruction booklet posted on the back wall that explains much about the high-end business. He tutors the audience on acronyms used (definitely not for the faint of heart) and other asides that offer some salty and savory insight.

Mesnik, who was available for a talkback with the audience after the performance, conveyed how the production with ISC has helped him to take his play to the next level. Were it not for learning of this caveat about Have I Got A Girl‘s in-house development, it would have never been evident — the production is so fully realized that one would believe this wasn’t its first full staging.

Have I Got A Girl For You was organically grown in South Florida, but this comedy definitely has a promising future outside of The Sunshine State.

This entry was posted in Performances, Reviews and tagged Christina Groom, Have I Got A Girl For You, Island City Stage, Josh Mesnik, Larry Buzzeo, Michael Leeds, Mike Westrich, Sharyn Peoples. Bookmark the permalink.