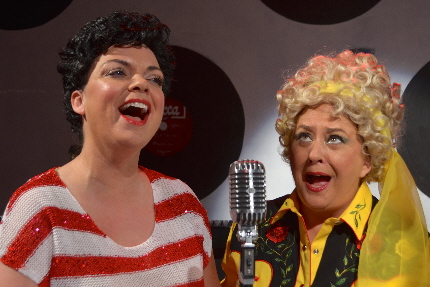 Savoring the pungent joy and sorrow of Always…Patsy Cline does not require the audience to love the Eisenhower Era musical moment when country-western music began morphing into pop-rock. You just have to surrender to the skill and enthusiasm flooding Thinking Cap Theatre’s production inaugurating The Vanguard Sanctuary of the Arts venue in Fort Lauderdale.

Ann Marie Olson, the epitome of a singing actress, delivers the Cline catalog with a glorious contralto and expert phrasing that sounds like the legendary performer. But her thespian chops elevate each number by suffusing each with the appropriate elation or regret contained in each song.

She is matched by Sally Bondi, in her own way, in a hilarious and touching creation of an ebullient outsized fan who hears her own spirit reflected in Cline’s music. Her Louise Seger is a downhome salt-of-the-earth Houston divorcee whose unbridled vitality would seem cartoonish in other hands. But Bondi never makes condescending fun of someone of whom most neighbors would likely say, “She’s a character.”

This oft-performed two-hander that lands somewhere between a revue and a bio-musical is an atypically mainstream offering from Thinking Cap, which has specialized since 2010 in off-beat fare. It has encompassed recreating a Christian tent revival staged in a parking lot in Church and a resurrecting a 300-year-old play for England’s first professional female playwright in The Rover. In fact, the first show slated for the new space was the much quirkier Waiting for Waiting for Godot, but the two actors took ill and it had to be moved to a later season.

But Nicole Stodard, producing artistic director of Thinking Cap, and the founder of the separate Vanguard, has superbly shaped those performances and this cross between a serious musical and a play awash in broad comedy.

The 1988 show by Ted Swindley is based on a true story how Houston single mother Seger discovered Cline’s music and became a rabid devotee. At a concert soon after, the two bonded and corresponded with the singer ending her letters with a phrase that became the title of this show. The play is actually narrated by Seger in monologues to the audience, but laced with 27 Cline standards including “Crazy,” “Sweet Dreams,” “I Fall To Pieces,” “Walkin’ After Midnight” and some terrific covers of “Your Cheating Heart” and “Shake, Rattle and Roll.”

The partisan audience opening night in the intimate Vanguard space needed no encouragement to clap along or applaud the opening chords of a song they recognized. One woman said this was her 15th viewing of the show and she even knew a bit of business that was missing.

There’s not much of a theme per se, but Stodard and Bondi underscore how some artists speak to us and for us as if, as singer-songwriter Nanci Griffith says, “someone had been reading my mail.”

Olson has proven over the past few years to be an unusually effective musical theater performer. She finally had a spotlight shone on her this past season as Lucille Frank in Slow Burn Theatre Company’s Parade, which has earned her a Carbonell nomination. Her work here should cement that reputation.

It’s hard to over-emphasize how Olson’s acting with those blazing carbon arc blue eyes and expressive voice add a fourth dimension to the rendition of these songs. Her full-bodied voice is bourbon-on-the-rocks smooth, but it’s her face and kinetic body language express that Cline is singing of pleasure and pain from personal experience. Olson’s Cline courageously brings emotions from the depths and into the light so that we can all recognize that as Melissa Manchester once said, “We’re not going crazy all alone.” Olson has this mannerism, perhaps unconscious, of looking at the audience with a slightly raised eyebrow that says, “You know that I know and we know what this feels like.”

And this is, we hope, a temporary farewell performance for Bondi who will be moving across the state. While she is best known as a skilled comedienne as she demonstrates here, we recall her touching portrayal of an anthropomorphic creature in Speaking Elephant at the late The Women’s Theatre Project and especially her harrowing triumph in the Alliance Theatre Lab’s ‘Night Mother.

Bondi’s Louise is a grinning firecracker who frequently chimes in on backup or call-and-response echoes to Cline’s songs as if she was hearing them on the radio in the kitchen or felt compelled to sing along at a concert. The actress takes on wildly divergent personalities as Louise relates conversations she has had, such as a confrontation with a crusty tobacco-juice spitting venue manager. She sounds completely natural coming out with lines like “he looked like death on a cracker” or “that man could have fallen through his butthole and hung himself.”

Cline and Kitty Wells were among the first women to find stardom as solo acts in country music and who increasingly took control of their own careers. Although unable to read music, Cline honed her natural talent until she had developed vocal skills that even today are phenomenal. In a brief career ending with her death in a plane crash in 1963 at age 30, she embraced musical styles encompassing the classic country waltz of Bob Wills to pop ballads of the young Willie Nelson to the honky tonk of Hank Williams to the cutting-edge rockabilly of Jerry Lee Lewis. She even admired the music of Elvis.

Praise is due as well to the kicking drumhead tight Bodacious Bobcats band led by musical director Andy Gilbert on keyboards with Gabriel Godoy on bass; Yekaterina “Katy” Sharf on fiddle, not violin, thank you; Dave O’Brien on the pedal steel guitar, and Nick Trotogott on drums.

The modest but effective set was designed by Alyiece Moretto and most people will not notice how Eric Nelson’s lighting design is unusually varied for such a small space.

Another nod is due Stodard for the character-revealing costuming, from Patsy’s fire engine red cowgirl outfit with copious white fringe and wagon wheel appliques on the skirt to her elegant dark teal cocktail dress – not to mention Louise’s solar yellow western shirt with the black-and-flower-embroidered yoke.

The overall effect is a roof-raising and heart-clenching evening that will carry you away if you let it.

Sidebar: Stodard and a loyal cadre of supporters have labored for 18 months to create the Vanguard as a badly-needed performance space, not just for her troupe but to provide as a sanctuary to small theater companies, art exhibitions, stand-up comedy, dance and film screenings.

The project has taken longer than she anticipated renovating a 1939 church at 1501 S. Andrews Ave. in the evolving entertainment area across the street from Broward Health Center, but it’s finally open after a lot of perseverance and sweat equity. Capable of housing 99 seats, its current configuration is about 75 seats arranged on three sides of a flat performing space, which has an intimacy for both the performers and audience. For more information, visit www.vanguardarts.org.

She hopes it will shine a brighter light on Broward County as a growing home for theater. After the disheartening closures of Mosaic Theater and Promethean Theater, Broward has recently become home to Outré Theatre Company and Slow Burn Theatre Company, both born in Boca Raton, which now join Thinking Cap, Island City Stage, Empire Stage and Infinite Abyss among others.

Parking note: Limited free street parking exists behind and adjacent to The Vanguard on 15th Street, metered parking exists on Andrews and at a municipal parking lot just south of The Vanguard in between Bob’s News and Big C’s Pizza. Parking can be a little tough to find on Friday and Saturday nights because of the crush at Tap 42 restaurant to the north.

Always…Patsy Cline runs through March 29 from Thinking Cap Theatre performing at The Vanguard Sanctuary for the Arts, 1501 S. Andrews, Fort Lauderdale, on the west side of the street across from Broward Health Center. Performances 8 p.m. Wednesday the 25th and Thursday-Saturday, 5 p.m. Sunday. Runs about 2 hours with one intermission. Tickets $37.22 with service fee. Visit patsy.brownpapertickets.com or call (813) 220-1546. Tickets sold at box office one hour before performance but reservations are recommended.