High-Flying Alice Tumbles Through The Lookingglass 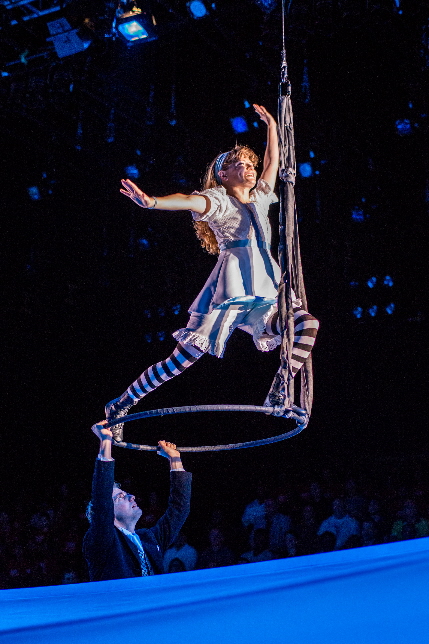 The primary thing usually missing from a Cirque du Soliel show is a discernable plot.

Lookingglass Alice, slipping into the Arsht Center’s spectacle-driven summer extravaganza slot, may not have the multi-million-dollar budget and scope of those Vegas extravaganzas. But it benefits immeasurably by using acrobatics and clowning to further a real story, obviously a spin on Lewis Carroll’s Alice through the Lookingglass.

Admittedly, that story gets a shade lost sometimes in all the flying bodies and flashing floodlights, so it helps if you’re familiar with Alice’s procession from pawn to queen through a phantasmagorical world of inspired nonsense.

But you can always luxuriate in a non-stop 90-minute whirlwind of theatrical stagecraft, circus skills and unbridled enthusiasm from the performers matched only by the boundless imagination of the people who created the show.

Five tireless performers impersonate a few dozen of Carroll’s characters from the Mad Hatter to the Cheshire Cat to the various Queens of the chess board that Alice traverses, even Carroll himself, the tweedy Rev. Charles Dodgson.

In set pieces that have to be seen to be appreciated, the imperious Red Queen orders heads to roll while ensconced atop a two-story-high dress that later glides madly around the playing area; the White Knight wheels about on a bicycle that keeps losing parts until it’s a unicycle; Humpty Dumpty does, in fact, take a breathtaking three-story fall, and a score of chairs for the tea party fly out of a normal-sized picnic hamper.

But little tops the brilliant coup de theatre just before the show begins and in its opening minutes that we wouldn’t dare spoil.

Once in a while, the cirque tail begins to wag the narrative dog such as an endless Mad Tea Party that gets bogged down in circus stunts.

At the center is a winsome Alice played by Lindsey Noel Whiting who contorts herself through hoops and ropes above the audience’s head. But she is supported by a cadre of low clown chameleons Molly Brennan, Kevin Douglas, Samuel Taylor and the single-named Adeoye, who may be multiple parts of a hallucinogenic caterpillar one moment and the demented Mad Hatter, March Hare and Dormouse the next. All five have played the show many times before and this allows them a noticeable ease with the material including a good deal of ad-libbed byplay with the audience and ad hoc improvisations.

While the circus feats and special effects are nowhere in the league of the lavishly-underwritten Cirque shows, this quartet is, indeed, quite skilled in gymnastics, acrobatics and all the expected capabilities.

Honoring Carroll, the script is filled with puns and jokes, many derived from the original text itself. The White Knight recites “Jabberwocky” in its entirety, acting it out with exhausting abandon. Characters quote some of Carroll’s most famous aphorisms such as “It takes all the running you can do to stay in one place,” and “When I was your age… sometimes I’ve believed as many as six impossible things before breakfast.”

This ensures that while the kids (and kids of all ages) are hypnotized by the kinetic hyper-activity, their parents can be mildly amused by Carroll’s sly commentary from an adult point of view.

In interviews, the Lookingglass crew talk about philosophical and artistic underpinnings that they have sought to inject into the fabric of the work, but most of those aspired-to niceties fly past the consciousness of most audience members – in part because the cast doesn’t always enunciate them clearly.

The Lookinglass creative team of sounds, lights, costuming, set design and music is endlessly inventive, starting even before the show starts. The audience enters from the Ziff Ballet Opera House lobby, but is escorted through a dim dappled auditorium up to the stage and through a huge gilt-edged mirror. The actual performance is staged with the audience on risers flanking the acting area.

The design can be as spectacular as the Red Queen’s towering dress or as simple as Alice slipping through and around an airborne hoop to mimic going through and down the rabbit hole.

The production was created in 2005 by the Lookingglass Theatre Company, which has evolved into one of Chicago’s most respected theaters with an affinity for highly theatrical techniques to further its storytelling. We were lucky enough in 2012 to see its Eastland, its stunning and deeply moving recreation of the tragic sinking of a pleasure craft in the middle of the Chicago River. For Alice and other projects, Lookingglass teamed up with The Actors Gymnasium, a company which merges theater and circus.

Over the years, the Lookingglass team headed by adapter/director David Catlin has refined, altered and embellished the piece for subsequent productions, culminating in an edition this past winter.

What was truly surreal, though, was, once again, the behavior of Florida audiences. People arrived late throughout Saturday night’s performance with one garishly-dressed couple arriving at 8:53 for an 8 p.m. curtain. But the most spectacular performance came from a drunk who made her way mid-show across the laps of the people in the back row of seats and then argued for a half-hour as an usher did an admirable job trying to make her sit down on the steps, only to have her slip down another row every few minutes.

Lookingglass Alice plays through Aug. 16 at the Ziff Ballet Opera House at The Adrienne Arsht Center for the Performing Arts, 1300 Biscayne Blvd, Miami. 8 p.m. Wednesday-Saturday; 2 p.m. Saturday-Sunday. Runs 90 minutes. Tickets $55 and $75. For $35 extra, get the White Rabbit Experience with backstage tour, meet the cast for photos, etc. For tickets, visit. www.arshtcenter.org or (305) 949-6722.