Hilarious, Profane Yet Oddly Reverent Book of Mormon Returns To Arsht And Kravis

Posted on December 4, 2014 by Bill Hirschman 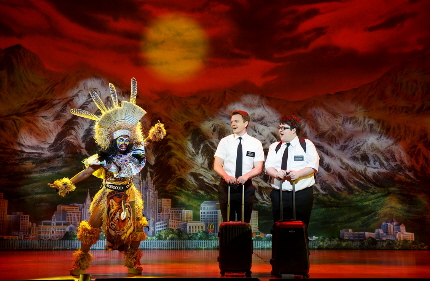 Youthful David Larsen and Cody Jamison Strand as Elders Price and Cunningham are welcomed to their mission by Monica L. Patton / Photo by Joan Marcus

This week is probably the busiest all season with eight to ten professional productions opening in the next few days. There will be new stories every day. To find reviews of all the current productions, click on the “Reviews” tab in white letters in the teal bar in the upper left-hand corner.

Hallelujah, children! We are delivered from the bondage of political correctness, the oppression of reactionary repression and the tyranny of the status quo. Raise up your voice and praise the bringer of these blessings — the national tour of the Broadway musical, The Book of Mormon now at the Arsht Center and en route to the Kravis Center (where it is already sold out).

If there are doubters among you, looks at the grins of liberation in the audience as the folks who brought you South Park, Avenue Q and Spamalot mercilessly skewer organized religion.

And while it certainly is one of most breathtakingly irreverent and jaw-droppingly profane lampoons of the narrow-minded and self-righteous ever staged, its real secret is its covert tribute to the merits of genuine faith and compassion for humanity.

Touching ballads of yearning for acceptance or a better life leaven the nose-thumbing, but production numbers include a vision of Hell that includes Hitler dancing with Jeffrey Dahmer, self-satisfied white missionaries proclaiming to black Ugandans that they are the real Africa, and a Biblical pageant in which the men wear long rubber hoses sticking out of their crotches.

Don’t come expecting something miraculous because of the massive hype; it’s just a musical after all and a surprisingly traditional musical at that. But there is a vicarious joy at watching a procession of hypocritical conventions and fake boundaries trampled over with abandon.

Which is what you expect from Matt Stone and Trey Parker, the creators of the anarchic television cartoon, South Park; Robert Lopez, a co-creator of Avenue Q, and Casey Nicholaw, the director/choreographer of Spamalot and The Drowsy Chaperone.

Nine Tony Awards recognized the 2011 show including best musical and best score. Besides the gate from the first and second national tours and a London production, the Broadway version currently sells more than 100 percent of the house each week for about a $1.6 million weekly gross, the highest on the Great White Way.

When it first played the Broward Center last season, we wrote, “A quick caveat before pouring on more praise: If you saw the show on Broadway, the humor can never seem as fresh as when you don’t know what verity is about to be ridiculed into submission; much of the show’s strength comes from the shock. But it still is hilarious even when you know the meaning of the words Hasa Diga Eebowai.”

Now here’s a real surprise. Somehow, this return to South Florida has inexplicably regained some of the freshness and magic with exuberance and idiosyncratic performances. The first tour cast was fine with no-asterisks. But this one seems both sharper in its execution and, well, sweeter, more in tune with the gentle facet of the elbow in the ribs.

The “Spooky Mormon Hell Dream” still feels like filler, but the anthem “I Believe” and “Man Up” and “I Am Africa” may never have been funnier, including when we saw it on Broadway.

The plot follows the mishaps of a mismatched pair of young Mormon missionaries as they try to make converts in Ugandan village plagued by a vicious warlord, poverty and AIDS. Elder Kevin Price (David Larsen) is a clean-cut square jawed straight arrow, as full of himself as he is the Holy Spirit, and consumed with ambition. He’s somewhat embarrassed by his scatter-brained partner, the pudgy but lovable Elder Arnold Cunningham (Cody Jamison Strand) whose need for acceptance leads him to make up stories when his ADD-addled brain doesn’t know the answer. Preaching The Book of Mormon that he actually hasn’t read, he embellishes the boring gospel with facets of The Lord of the Rings and Star Wars.

But their fellow Mormons on site led by the closeted Elder McKinley (Pierce Cassedy) have not converted anyone, least of all the warlord (David Aron Damane) or the village chief Mafala Hatimbi (James Vincent Meredith). The chief and his countrymen explain to the newcomers the horrific living conditions they face during the show’s funniest song, “Hasa Diga Eebowai.” This bouncy sprightly tune that sounds lifted from The Lion King has a much different meaning when translated into English.

The young men only find a little hope when they meet and convert Nabulungi, Hatimbi’s daughter (Deneé Benton) who dreams of a paradise that the Mormons have told her about, Salt Lake City.

But the harsh reality and the unrealistic doctrine collide, leaving the missionaries with some genuine soul searching moments and transformations to undergo in search of humility, self-worth and a more durable sense of purpose.

The two aforementioned surprises are key to the show’s success. For all its iconoclastic material, Mormon hews closely to the time-tested structure and conventions of a traditional well-made musical. Even the orchestrations by the versatile Larry Hochman and Stephen Oremus sound like a traditional Broadway musical. Second and more telling, The Book of Mormon may skewer organized religion, but it’s actually sweetly supportive of the moral good that comes out of faith. It’s actually pro-faith in its own very backhanded way.

The book is hilarious and the lyrics are downright brilliant at ribbing the missionaries’ self-righteous attitudes and the arrogant confidence in their omniscience. When Price sings to the warlord about his reaffirmation of his unquestioning and unthinking faith, “I Believe,” he says blithely that per Mormon doctrine “I believe that in 1978, God changed his mind about black people.”

There are scores of meta-references to other musicals, sometimes a line of dialogue, sometimes a bar or two of familiar Broadway music, a wry knowing lyric or even a sight gag. Broadway musical geeks will have a field day noticing such nods as how the opening number “Hello” of the missionaries ringing doorbells in Salt Lake City echoes the opening number “The Telephone Hour” from Bye Bye Birdie.

This first road company throws themselves into the show with an infectious pep and vigor that deliver the sense over the footlight that they are having a hell of a good time so you should too.

Within the strictures of a carefully-choreographed machine, the entire cast brings just a slightly different spin to their characterizations. Larsen is less priggish  than the role’s originator, Andrew Rannells. But the light in his face glows with pure religious fervor and he — amazingly — makes his conversion to  a compassionate person credible. Strand is more adorably inept but less buffoonish that Josh Gad, the Broward resident who originated the role. He has a Woody Woodpecker laugh and a John Belushi abandon. Benton is a real find, just out of college. Her rendition of ballads like “Salt Lake City,” dreaming of  a new life, is bith silly and touching at the same time. Cassedy excels as the mission leader fighting in vain to cope with his burgeoning homosexuality. Brandishing a toothy grain and exhibiting a delightful gawkiness, he steals virtually ever number he’s in.

There were some opening night glitches: The sound needs to be refined because a lot of the lyrics were lost in a muddle, and a few singers slipped off pitch on occasion. But the orchestra, some of which was recruited locally, sounded note perfect.

Tickets are tough to get, especially in the orchestra section, but if the words rebellious, defiant, unruly, recalcitrant and insubordinate speak to you in some way, it’s worth trying to find one. A signal of its popularity is that Broadway Across Miami which rarely books anything in the Arsht for more than one week, has allocated two weekends. And the run at the Kravis is already completely sold out.

Note: The company will offer a limited and undetermined number of discounted tickets in the lower orchestra section for $25 through a pre-show lottery each day. Entries will be accepted at the box office beginning 2 hours prior to each performance. Each person will print their name and the number of tickets they wish to purchase on a card that is provided. Ninety minutes before curtain, names will be drawn at random. Cards are checked for duplication prior to drawing. Winners must be present at the time of the drawing and show valid ID to purchase tickets. Limit one entry per person and two tickets per winner. Tickets are subject to availability.

The Book of Mormon runs through Dec. 14 at the Ziff Ballet Opera House at the Adrienne Arsht Center for the Performing Arts, 1300 Biscayne Blvd., Miami as part of the Broadway Across America-Miami series. Performances are 8 p.m. Tuesday-Saturday; 2 p.m. Saturday; 1 p.m. and 7 p.m. Sunday. Runs 2 ½ hours including 18 minute intermission. Tickets are $39 – $125.  For more information, call (305) 949-6722or visit arshtcenter.org. Also plays Dec.6-23 at the Kravis Center, but the performances are completely sold out.

(Editor’s note: Some of this review appeared when the tour came to the Broward Center last year, but it has been updated to reflect new cast members and the changes a tour undergoes after many months on the road).