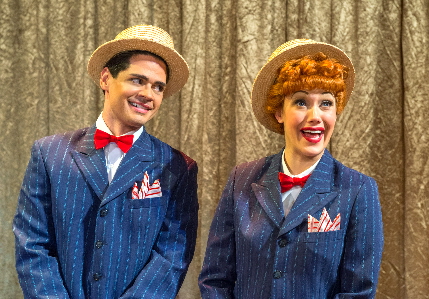 Don’t let the ® prominently displayed in the title fool you. There is little evidence of the irrepressible vitality and downright hilarity of Lucille Ball®, Desi Arnaz® or I Love Lucy® to be found in this reasonably well-intentioned, well-acted and well-produced offering.

The premise of recreating the filming of two Lucy episodes before a live audience, us, set in a now-quaint fresh-scrubbed 1952 probably sounded intriguing on paper, but in the flesh it only works a quarter of the time.

That’s because Lucille Ball and Desi Arnaz were near geniuses and their iconic carefully-tailored show was lightning in a bottle that simply cannot be replicated or done justice with an affectionate homage. “Inimitable” means cannot be imitated. And nobody has ever successfully recaptured what Ball and Arnaz did. So it’s not remotely fair to ask such genuinely talented hard-working performers as Thea Brooks (Carnegie Mellon-trained) and Miami’s own Euriamis “E.L.” Losada to compete or be compared with ghosts still fresh in our memory.

This is a problem we’ve referenced repeatedly when stage shows try to recreate real people who we’ve actually seen and heard in our lifetimes. Bryan Cranston gave a terrific performance on Broadway last season as Lyndon Baines Johnson in the play All The Way, but it wasn’t the Lyndon Baines Johnson that anyone over 60 actually remembered.

Just wait 20 years until someone does a straight play about the life of Robin Williams and some talented imaginative 29-year-old actor/comedian essays recreating the Williams you knew and loved. Your hackles will revolt.

Creators Kim Flagg and Rick Sparks have built the 1-hour 40-minute evening around the taping of two original Lucy scripts written by the legendary trio of Jess Oppenheimer, Madelyn Pugh and Bob Carroll Jr. who get a nod on the cast of characters page if not on the title page of the program where they belong.

But Flagg and Sparks knew that two 25-minute episodes would never total a satisfying evening of theater with a top ticket price of $89. So they bracket the episodes and intermingle them with the business of filming before the Desilu audience, overseen by genial warm-up emcee Maury (Mark Christopher Tracy) plus several commercials performed live by the studio’s impossibly white bread sextet, the Crystaltone Singers. With clearly faux bonhomie, Maury is forever referring to such cutting edge developments as the enormous Philco 21-inch television screen.

Initially, all this is cute, such as the Alka Seltzer commercial with a live dancing Speedy. But it wears out its welcome real quickly. After the third commercial and the second Hit Parade medley interlude, it just seems lame filler worthy of suspect sausage. Flagg and Sparks cannot make clear whether they are lampooning the era or trying to revive fond memories. It’s not at all camp, it’s not pure affectionate nostalgia, it’s not effective satire. But Maury’s incessant rib-nudges on behalf of the 21st Century authors mocking the naiveté and innocence of the era eventually leaves a bruise.

Even so, Flagg and Sparks’ adaptation of the original scripts is the show’s prevailing virtue. They wisely avoided the impossible-to-equal episodes like the Vitameatavegamin classic.

Instead, they chose 1952’s “The Benefit,” which tracks the tone deaf Lucy’s plotting to star in a benefit’s song-and-dance number with her husband. Ricky finally agrees but he tries to relegate her to a second banana role. Good luck with that, as she finds a way to upstage him in the kind of imaginative script writing that was a hallmark of the show.

“Lucy Has Her Eyes Examined” from 1953 relies more heavily on what Ball and Arnaz added to the scripts – the physical and visual comedy. After Lucy’s eyes are dilated during a doctor’s visit, she gamely soldiers on to an audition at Ricky’s club for a Broadway producer even though she can barely see a foot in front of her. Her rehearsing of a jitterbug dance number and then the wacky execution of it in the club are, indeed, inspired.

The show relies heavily, very heavily on the good graces of audiences who overlay the evening with their own warm memories and are willing to squint their eyes so to speak. The absolutely largest laugh and sustained applause of the night came when Losada let loose with a heavily accented (heavier than the rest of the evening), “Lou-ceee, you’ve got some ‘splainin’ to do!”

There are some cute conceits such as when filming has to stop, as in real life, when Vivian Vance went up on her lines and William Frawley grumbled about not being at the bar. And, not to spoil it, but there’s a wry twist on the classic Chevrolet car commercial.

Brooks is in there pitching the whole nine innings as Lucy Ricardo. She has obviously studied clips, so she has down cold the feigned crying jag (“Waaaah!”), the rubbery grimaces, the bright shining eyes and much of the comic timing. Her physical abandon and her voice are in the neighborhood if not perfectly on the mark. But she isn’t and can’t be Lucy who organically exuded a lovably hapless yet never-say-die plotting quality that’s just injected here. Our Miss Brooks looks and acts more like Eve Arden, for those who remember her. 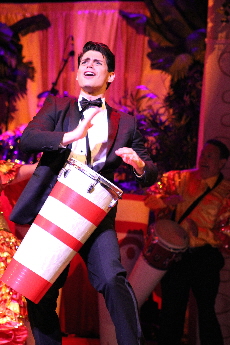 Losada, who won two Carbonells before moving to L.A., was always handsome and engaging, but he has grown into his looks, and he is now a stunner. He exudes a warm charisma when he smiles at the audience and his fine singing voice does justice to “Babalu” among other numbers. The Cuban-born Losada bravely embraces Arnaz’s ego-free mocking of his Cuban accent (“We are happy to mit you.”) But we remember Losada’s fine performance as Edmund in New Theatre’s Long Day’s Journey Into Night. This gig doesn’t tap a tenth of his acting chops, not even his comic talent.

Kevin Remington as the uber-curmudgeon William Frawley/Fred Mertz and Lori Hammel as the Thema Ritter-dry Vivian Vance/Ethel Mertz are also doing what they can, but they simply aren’t able to summon up the ghosts of these superb character actors or their characters.

You can’t fault the producers for half-measures. There’s a cast of 14, a six-piece band and some dead-on period costumes by Shon LeBlanc and Kelly Bailey.

Sparks, who is listed as the director and stager (again, where is the credit for the original episodes’ directors), never lets the energy level or the pace to flag. It all runs like a machine which makes sense since he helmed an earlier version in Los Angeles and Chicago and an earlier national tour. But it’s all like viewing the past not through rose-colored glasses, but through translucent muslin.

In retrospect, I Love Lucy® Live On Stage isn’t a bad show, it doesn’t even feel exploitive, everyone’s trying. But you quietly keep asking all night why take up a slot in Broadway Across America’s season with this. 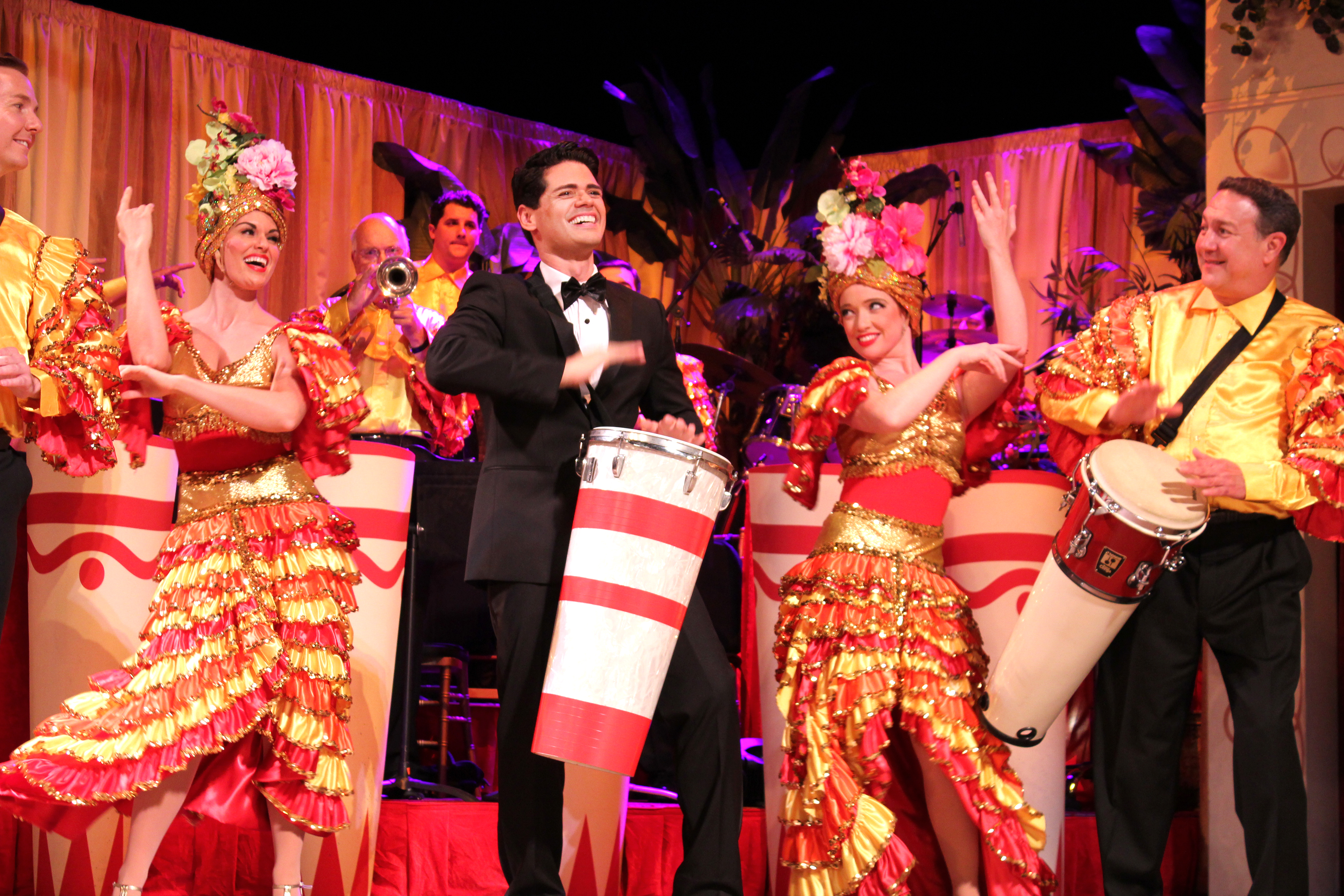