Indecent Exemplifies What Theater Can Be & Why We Go 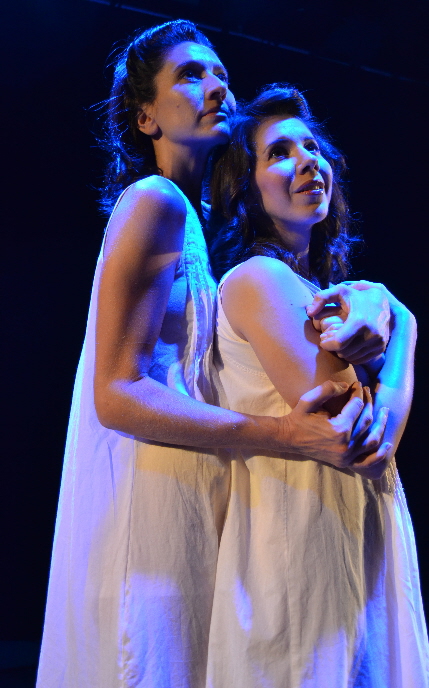 The “regular” South Florida theater season (ignoring that the summer is filled with offerings as well) is fully underway. Three openings last week, five this week, four in another week or so. If you don’t see a review or a feature you are looking for, it’s either already posted further down the main entry page, listed by pressing the  “Reviews” tab on the teal and white rail, or it’s coming in the next few days. There will likely be something new posted nearly every day.

Palm Beach Dramaworks’ Indecent is precisely the kind of thrilling evening that glories in what theater can be – a unique art form that cannot be matched by anything on film, anything hanging on a wall, anything reproducible on an mp3 or an mp4.

Even when theater falters, which this superb production never does, its imaginative fusion of genre-specific skills across a spectrum of disciplines creates a vibe of immediacy all the more exciting because it’s a unique and ephemeral experience. When all the disparate elements coalesce, comment on and echo each other, nothing can touch it.

Bedecked with Klezmer music, droll humor and a smattering of Yiddish dialogue, the story and the zeitgeist of the piece is deeply rooted in the Jewish theater of Europe and the United States in the first half of the 20th Century. But its underlying themes of intolerance, immigration, assimilation, artistic censorship and especially love in many variations are as universal as any audience could ask for.

The audience enters to find a silent troupe of performers in somber early 20th Century dress sitting inside a theater where the walls and pillars are crumbling. These are the ghosts of a Jewish troupe based in Poland after the turn of the century. This repertory group rises from the dead to perform Vogel’s play Indecent.

The Indecent actors and musicians unreel a version of real events and people: Around 1907, a young impassioned Polish novelist Sholem Asch writes a play in Yiddish, The God of Vengeance. While a bit melodramatic, its premise is boundary-shattering in its unvarnished vision of Jews as human beings with virtues and flaws.

Specifically, in Venegance, an Orthodox Jew named Yekel runs a brothel in the basement of his home. Yekel believes that if he can find a righteous husband for his innocent daughter, Rifkele, and have a Torah scroll created as a gift to the couple, he can earn respect and make amends with God. He is unaware that Rifkele has fallen in love with Manke, one of his prostitutes. Vengeance’s two most controversial vignettes: the enraged Yekel hurling a Torah across the stage at his daughter, and a tender love scene in the rain between Rifkele and Manke. The latter is a scene we will not see until late in the evening, a moment which we’ll come back to later.

Lemml, the company’s stage manager disillusioned by Asch’s refusal to aggressively fight, returns to Warsaw and its ghetto. From 1939 to 1943, he defies the Nazi prohibition of Jewish theater by mounting secret productions of this work he has worshipped since the first day Asch showed it. Those forbidden productions have a tragic consequence.

We’re telling you all of this so you can appreciate the simultaneous resonances: A 21st Century theater company is producing a play about a dead troupe of 20th Century actors who are telling not only their own story, but that of the play itself, told through a journey spanning a nearly a half-century including later epilogues and codas.

As a celebration of the love of theater, Indecent’s every moment is infused with proudly profligate theatricality: The actors play distinct multiple roles, adding perhaps a hat or a moustache or a shawl. Their sets are a few worn tables and chairs plus the immigrants’ suitcases they carry all night. The narrative erupts into singing and dancing as a diversion. There are several symbolic visual coups de theatre that stop respiration.

And other than a scene to be described in a moment, the entire evening has the slightly melodramatic presentational vibe that dominated most theatrical productions of the Vengeance period.

So here’s that moment which has to be seen to be perfectly appreciated: two of the Jewish troupe’s actresses, who are closeted lovers themselves, now perform a rehearsal of the love scene that enables them to act out their real love. The affected manner of the previous hour evaporates and we see the ecstasy and purity of love that Asch wanted to communicate with uncompromising artistic integrity, all depicted with a compelling naturalism. This scene in Indecent takes a rehearsal scene of a scene in Vengeance to venerate Asch’s vision of love, the actresses’ vision of love, the characters vision of love, Vogel’s vision of love and Dramaworks’ love of theater as a stimulus for thinking and feeling.

Much of this is inherent in the multi-dimensional script by Vogel, which was conceived and originally directed by Rebecca Taichman in a ten-year project that earned Vogel her first Broadway production in 2017 despite an acclaimed career as a teacher and the author of now classic plays like How I Learned to Drive and The Baltimore Waltz.

Illustrative of her genius is to illustrate the difficulty both actual and spiritual in assimilation: the Vengeance actors trying to speak in English and their native Yiddish. When they speak in “English,” their limited experience makes the cadence halting as they explore for words with a noticeable accent. When they switch to “Yiddish” in the same scene, their speech (still in English) sounds articulate and with hardly a hint of an accent.

But a huge share of the credit belongs to master director J. Barry Lewis, associate director and crucial choreographer Lynnette Barkley, and musical director Glen Rovinelli, leading a repertory company of chameleons: Cliff Burgess, Mark Jacoby, Matthew Korinko, Dani Marcus, Jay Russell, Laura Turnbull, Kathleen Wise. The tireless never-stationary musicians-actors crucial to establishing the mood are Anna Lise Jensen on a violin that is sometimes sweetly sad and other times raucous; Rovinelli on an assortment of woodwinds including the clarinet, and Spiff Weigand on accordion.

Taichman’s staging in 2015 was brilliant, but some people had difficulty following who was who, when and where. There is no such problem with Lewis and Company whose fluid but clear staging flows.

Michael Amico has created the timeless ruin of an abandoned theater. Brian O’Keefe has ingeniously altered period costumes with an accessory to differentiate characters. Brad Pawlak’s sound is faultless. Local actor Avi Hioffman, a nationally-known expert in Yiddish theater, culture and the language itself, tutored the cast, some of whom knew no Yiddish at all.

But the most stunning work is the light painting by Paul Black keeping clear the changing scenes and the ever-morphing emotional tone with atmospheric illumination. Black and Lewis often have footlights cast the actors’ shadows on the back wall, spirits swirling in dance or gesticulating in three-story tall silhouettes.

As serious as all this sounds, it is also gently funny at times, deeply moving at other times. It stands as one of Dramaworks’ finest.

Indecent runs through Nov. 11 at Palm Beach Dramaworks, 201 Clematis St., West Palm Beach. Show times are 7:30 p.m. Wednesday, Thursday and some Sundays; 8 p.m. Friday and Saturday; and 2 p.m. Wednesday, Saturday, Sunday. Running time 1 hour 40 minutes. Individual tickets are $75. Student tickets are available for $15, and Pay Your Age tickets are available for those 18-40. Tickets for educators are half price with proper ID (other restrictions apply). Call (561) 514-4042, or visit palmbeachdramaworks.org.

To read a feature on Paula Vogel and Dramaworks’ production of Indecent, click here.