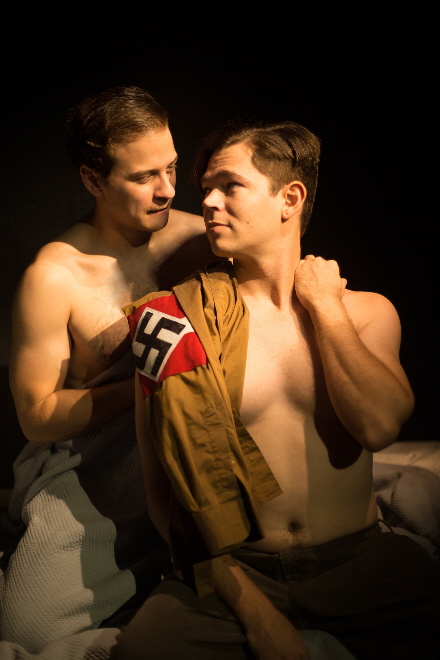 Does Liesl know? Sahid Pabon and Jordon Armstrong in The Radicalization of Rolfe at Island City Stage / Photos by George Wenztler

The buzz about the world premiere play The Radicalization of Rolfe at Island City Stage implies a truly intriguing nesting of premises.

How about a play that tries to explain how Rolfe, the sweet messenger boy romancing Liesl in The Sound of Music ends up with a swastika on his arm helping the Nazis hunt down the Von Trapps? How about a play that tracks in a more general sense how decent everyday people can be seduced by demagogues to enthusiastically join abhorrent movements espousing abhorrent ideas?

Well, this ain’t that play.

This is a play when at a crucial tense dramatic moment, an older woman coaxing our hero to escape, says, “What do you want me to do, Rolfe? Sing you a song? Climb your own mountains, dear.”

Indeed, yet another intriguing idea in Andrew Bergh’s script is to create a Rosencrantz and Guildenstern Are Dead set up in which the entire narrative arc of The Sound of Music is happening off stage and its minor players are the primary characters in this one. But Bergh has these characters unnecessarily relate every single plot beat of the musical (one character tells the other that the kids just sang goodnight at the end of the party) as if anyone in the audience needed the slightest reminder.

And of course, this play is being produced by a theater committed to telling LGBTQ stories, so the truth is that Rolfe is gay. But he doesn’t realize his sexuality during his depicted radicalization. He has acknowledged his sexuality long before Maria twirls around on an Austrian mountainside and, buy this, is recruited by the Nazis to romance Leisl as a way of getting is inside information on the politically suspect Capt. Von Trapp.

The Nazis don’t know Rolfe is gay, but you do because this is Island City Stage. So 15 minutes into the play, the lights come up on Rolfe in the arms of his lover. You’d have to be pretty thick not to know exactly, and I mean exactly, how this story will end about 1 hour 45 minutes later.

What carries the audience is the central performance of Jordon Armstrong as Rolfe. His hair dyed gold atop a 200-watt grin of optimism between apple cheeks, Armstrong convincingly portrays Rolfe’s faultless ambition and admirable determination with a naiveté that makes him heedless of the danger inherent in his unbridled willingness to help this new cause that claims to value him. As he is asked to participate in ever more ethically dubious challenges, Armstrong depicts the growing anguish behind the bright gleam in his eyes. Armstrong is easily the best thing in the production.

The story opens as the bright cheery Rolfe is being recruited by the ruthless mustache-twirling Nazi organizer Herr Zeller  (Michael Kehr) to use his position as telegram delivery boy to spy on the von Trapps and to escalate his platonic friendship with Liesel into a romance. (When asked, Rolfe says, “She is sixteen. Going on seventeen…. I am seventeen. Going on eighteen.”)

Over time, we see how this blue collar boy with no prospects is seduced by the promise of power and stature. Obviously, the play has resonances for our time.

Zeller, a passing character in the musical, has already recruited the Von Trapp’s butler Franz (Larry Buzzeo) to spy on the family and to romance the housekeeper Frau Schmidt (Carol Caselle) for even more intelligence. Turns out that Schmidt’s nephew Johan (Sahid Pabon) has been Rolfe’s lover for some time and they hang out at the athletic club where gays gather.

Suffice it to say that, without much subtlety or surprise, almost everyone gets backed into threatening, blackmailing and betraying almost everybody.  The play suddenly gels in the final 15 minutes as the compromises close around Rolfe like a raw-grained noose. But the promised radicalization of the title is not completed unless the title is meant sardonically. By the end, Rolfe despises himself for what he has and is doing as the lights dim.

Director Andy Rogow does what he can but the script needs an overhaul. First, it’s hard to know quite what tone Bergh wants the play to strike. Just as the audience begins to get caught up in the increasing tension and threat, Bergh tosses in mood-spoiling meta-references like saying that Maria has confidence, or or she is clean and bright and smells like edelweiss.

Yet another shortcoming is that the “radicalization of Rolfe” really only takes up about 60 percent of the play; the rest has the other characters maneuvering and manipulating each other in scenes that have at best a marginal connection to Rolfe’s arc.

Critics should never judge a play based on what they would like to see it be; they should respect the vision of the artists. But it was almost impossible to dismiss the recurring chilling scene in Bob Fosse’s film of Cabaret of an Aryan youth singing “Tomorrow Belongs To Me.” Tracing that kid’s radicalization and psyche would have been fascinating.