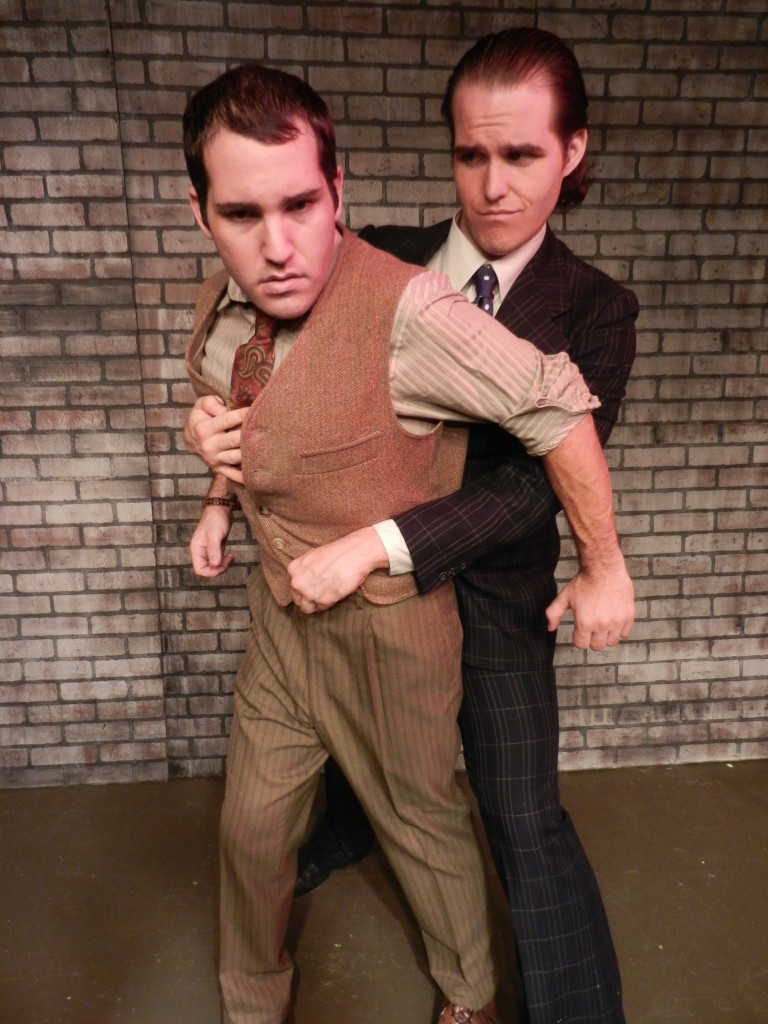 The Twentieth Century Way is an intellectual theater game worthy of Pirandello or Stoppard in which facets swirl at such a dizzying speed that individual ideas become too blurry to discern.

All you can do is admire the chameleonic agility of the actors, the dexterity of the playwright and watch a particle of light careen around the mirrored facets inside a gem, unable to track what is happening more than fleeting seconds.

This co-production between Empire Stage and Island City Stage, the resurrected phoenix that was once Rising Action Theatre, is an audacious and ambitious offering in which actors Clay Cartland and Michael Westrich slip in and out of a dozen roles under the direction of Michael Leeds.

The play is gloriously theatrical as the duo nimbly shuttle among characterizations like the supernumeraries in The 39 Steps. But the hard truth is that they get so involved in the technical demands of the transformations that they aren’t precise enough to clearly deliver the thematic subtleties of Tom Jacobson’s Byzantine script. Another few days of shakedown seem called for.

The premise is a play within a play within a play (with a fourth layer dropped in during the last minutes). Two actors show up to audition for the film role of a 1914 con man, having rented period costumes to impress the director. Waiting for the AWOL director, the flamboyant Mr. Warren (Cartland) challenges the younger Mr. Brown (Westrich) to improvisations with the least successful one leaving the audition slot to the other.

Mr. Warren’s suggested scenario is for the two actors to portray two out-of-work actors Mr. Warren and Mr. Brown, hired by the City of Long Beach in 1914 to impersonate gay men as bait for one of the first organized stings of homosexuals on morals charges in the country —  a true but little known bit of history.

The auditioning Mr. Brown, who knows nothing about the case, not only dives right in, but somehow divines the historical plot to play, perhaps through psychic powers.

Jacobson’s tracing of this shameful episode provides a narrative through-line for the 85-minute show, which includes frank sexual discussions and nudity. But what he brilliantly explores is the muddy line between theatrical art and real life as Warren and Brown pinball among the present- day auditioners, the 1914 actors turned vice cops, the faux characters that the vice cops play to entrap their prey, their quarry — and still another layer. What is reality; what is a role? Can an actor – by definition a dissembler – have true feelings? Can the dishonesty of acting pollute the integrity of being human? Where does the inner reality of the actor inform the duplicity of his performance – and visa versa?  On and on like a hall of mirrors.

Is it intentional that the audience is not always sure which level we’re in? Does Jacobson or Leeds mean the levels to bleed together? With characters switching to a different level for a single line, we’d be completely at sea if not for lighting changes by Nate Sykes that try to key us in.

All that said, the work of the actors and Leeds is admirable as they encompass vaudevillian comedy, streaks of pathos and stretches of Beckett. Westrich is not terribly persuasive or engaging in his role as the nasal stolid Mr. Brown, but he skillfully and assuredly disappears into an ever-morphing collection of distinct characters portrayed by Mr. Brown. In just one scene, Westrich/Brown convincingly dons and doffs the personas of at least five distinct patrons of a safe house for sexual coupling.

Cartland devours the showier role as the aggressive Mr. Warren. Cartland’s comic chops get a workout as Warren gleefully inhabits a parade of intentionally cartoonish characters with a United Nations-worth of broad accents. Cartland has cemented a reputation recently as a deft and daffy clown, although he delivered credible gravitas as the hero’s best friend on Outré Theatre Company’s reading of the musical tick…tick…BOOM in May.

Despite both actors’ proficiency, something serious is lost. Jacobson’s script is jammed with the corkscrew cerebral and verbal gymnastics of Stoppard’s Arcadia or Rosencrantz and Guildenstern Are Dead. On Leeds’ watch, the words come glibly, but the actors are not concentrating sufficiently yet on communicating the actual substance of Jacobson’s incisive bantering.

Even with its flaws, the intriguing The Twentieth Century Way is welcome if only as the vehicle that returns Artistic Director Andy Rogow and Island City Stage, a company with the mission of focusing on LGBT-themed theater.