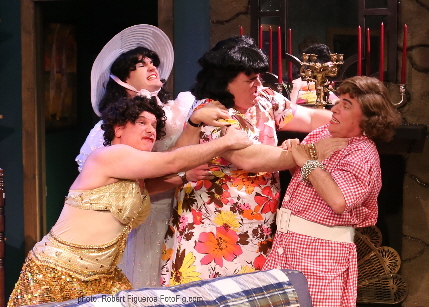 A quiet moment at a birthday party in Who Killed Joan Crawford at Island City Stage with Andy Rogow, Christian Vandepas, Troy Stanley and Barry Marcus / Photo by Robert Figueroa

Five guys dressed as Joan Crawford gather at a cabin in upstate New York. They’ve been summoned for a night of watching the Tony Awards. It’s 1993 so Liza Minnelli is hosting, Chita Rivera is a shoe-in to win for Kiss of the Spiderwoman, and there’s a debate whether Tommy is really a musical or a rock opera. They’re here to celebrate their friend Trick Rogers’ (a brief cameo by Vic Shunal) birthday. He’s a soap opera star who loves, loves, loves Joan Crawford. In fact, he may have even had a fling with her, so the dress request for the party is to pick your favorite character Crawford played in one of her many movies.

At Island City Stage, the world premiere of playwright Michael Leeds’ Who Killed Joan Crawford? is campy, clever, and the kind of inventive fare that ICS loves to take chances on.

Kevin Reilley is Gene Harlow (no, not the actress, but the inventor of automatic toilet seat sanitation covers in public restrooms). He’s the perfect Mildred Pierce, porcelain in pancake makeup, heavily painted eyebrows and a fabulous fur. Troy J. Stanley is another Joan, but in daylight hours he’s Harvey Goldberg, Trick’s publicist who also represented Chita at one time. Broadway composer and resident narcissist Leo Lawrence is played to the dry hilt by Barry Marcus, who has brought a young date, David Hoch (Christian Vandepas), to the party. Since David is under 25, he’s confused a Crawford movie with a movie about Crawford. Finally, there’s Trick’s friend and therapist, Stewart Fry, played by Island City Stage’s Artistic Director Andy Rogow. “I spend my days analyzing why people do what they do,” says Rogow’s nervous nelly analyst.

This is the first full-length production of Leeds’ play – it had two staged readings, locally and in Chicago at the Pride Films & Plays 2014 Gay Play and Musical competition, where it was chosen as one of the five finalists. Leeds, the associate artistic director of Island City Stage, had an offer from a Chicago company to produce the play, but he wanted to direct it here. And so, Fort Lauderdale gets its first full view of Crawford.

It was Ms. Crawford who said: “There’s a lot of bitch in every woman – a lot in every man” and that’s certainly the case in Who Killed Joan Crawford? where Leeds’ catty queens wait around every corner to pounce on one another. The four old friends have history together – history that goes way back. The dark and stormy night brings out long harbored resentments and secrets, plus a few surprises. Oh, and a charades game.

What’s so inventive is the underlying old-fashioned, murder mystery homage, which is wrapped up neatly in this Agatha Christie drag queen parody. The writer plants red herrings, character altered identities, closed quarters to confine the players, pointing the finger easily at each character in the whodunit, and then the big reveal.

The ensemble cast knows how to play Leeds’ intentions to the hilarious hilt, each upping the ante as the plot thickens. And in a true tribute to the murder mystery genre, it’s a fun parlor game to figure out why Rogow decided to come out of actor’s retirement for this role.

Costumer Peter A. Lovello obviously had plenty of fun creating the Joans as well as the fabulous wigs by Ellis Tillman. Lighting design was by Preston Bircher and sound design by David Hart.

Not all is perfectly coiffed in this premiere, however. Michael McClain’s set is problematic in its immersion – it appears more like a New York City flat than the intended setting of a cabin in upstate New York.

The script will may go through a few tweaks and changes after this run – the inside Broadway jokes get repetitive after a while and the stakes for each player probably need to be a bit higher. However, if Leeds keeps everything intact, this is still an inventive show that can make the regional theater rounds and have a good shelf life.

Break out the martinis anyway. Who Killed Joan Crawford? isn’t perfect, but it’s still a helluva lot of fun.