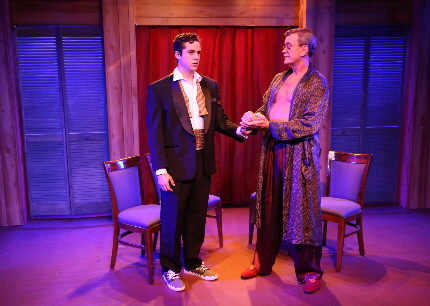 As those of us over 12 years old know, hero worship is a doomed path straight to disappointment. But Jonathan Tolins’ Secrets of the Trade at Island City Stage excavates a bit below that obvious truism and explores the complexities behind that symbiosis.

The production has an array of moderate strengths and moderate weaknesses, but the second act is more satisfying because Tolins delves deeper than the obvious set ups of the first act. In the end, it’s a cautionary tale to sycophants about the need to find your worth inside yourself rather than in the reflected glory of others.

Set in the 1980s, the story focuses on Andy Lipman, a theater-addicted 16-year-old from suburban Long Island who writes a fan letter to famed director/playwright Martin Kerner. He naively hopes the Great Man will hire him as an assistant. Kerner blows it off, but two years later, he agrees to have lunch with Andy, now a Harvard student hellbent on a career in theater.

Andy is in heaven as Kerner unreels well-thumbed anecdotes, intentionally brash opinions, observations about the art form and a bit of career advice. Andy’s breathless adoration is inexhaustible and unflagging but exhausting for the audience to watch. Kerner is flattered by the attention and sucks up the adoration like a vampire. Andy cannot agree fast enough with Kerner’s pronouncements to the extent that Kerner admonishes, “Don’t assume you know what I’m going to say.”

Kerner, a don’t ask-don’t tell gay man just past his prime, has spotted what Andy may not have confirmed – his latent homosexuality. When Kerner says, “You have to be open and receptive to me.” the audience’s radar goes off.

As the decade goes on and Andy ages, Kerner never does much concrete for the boy, but he is very willing to luxuriate from time to time in Andy’s idolization. Meanwhile, Andy’s parents feel shut out when Andy callously dismisses them as bourgeois and seeks the guidance of Kerner as a mentor. When Andy’s college production does not thrill his parents, Andy rebels and goes to Kerner for validation and to admit his homosexuality.

From there, the plot thickens, as they say. Up to that point, Tolins has laid out a pretty predictable trajectory and pretty predictable characters, especially the annoyingly naïve Andy who has that maddening arrogant certainty that only a 20–year-old can have.

But in the second act, Tolins starts to surprise us by revealing more complicated sides to the characters. For instance, when Andy’s mother challenges Kerner’s motives as purely sexual, Kerner reveals a simultaneously selfish and altruistic reason for his interest. Tolins did the same thing in his better-known play, Twilight of the Golds, in which homophobic grandparents-to-be have more complex rationales than we first surmise. Director Andy Rogow has a feel for staging those reveals that are the strongest part of the show.

The script’s major shortcoming is that Andy is so self-centered and whiny (as Tolins designed him) that the play feels like it goes on way too long. You just want to slap the kid upside the head and tell him to grow up.

Tolins does construct a well-made play. For instance, he closes every scene with a buzzy line. When the mother asks, “What happens if his dreams fall apart, what will become of him?” To which the father answers, “He will be like all of us.”

The capable cast is surprisingly good, although poor Alexander Zenoz is saddled with a full first act of playing this immature groupie. Only as Andy matures a bit in the second act — still needy, still obnoxious to his parents, still “nobody understands me” – only then does Zenoz get to show a bit of range. But that’s what Tolins wrote and what Rogow respects.

More interesting is Bill Schwartz’s Kerner, totally committing to his character’s self-centeredness, the posturing, the carefully-masked fragile ego. And yet, Schwartz makes it clear that this flawed human being is quite aware of his shortcomings, quite aware that he is feeding off Andy’s idolatry, and actually cares about Andy’s maturation – so long as Kerner doesn’t have to put himself out. Schwartz finds all those colors and melds them into a plausible creation.

Also in keeping with Tolins’ subtler approach, Niki Fridh and Peter Librach do a credible job portraying Andy’s parents – simultaneously baffled and supportive, but with limits. Larry Buzzeo also makes a solid impression as Kerner’s assistant Bradley, obviously a post-enlightened Andy. Buzzeo gives the world-weary sense that Bradley has seen it all, partly because he has been there himself, and partly because his position in the stands has allowed him to watch every permutation of this pageant.

Secrets of the Trade is a flawed, but intriguing look at the price of adulation.