Jekyll & Hyde May Split Theater Lovers But Will Please Fans

Posted on February 5, 2019 by Bill Hirschman 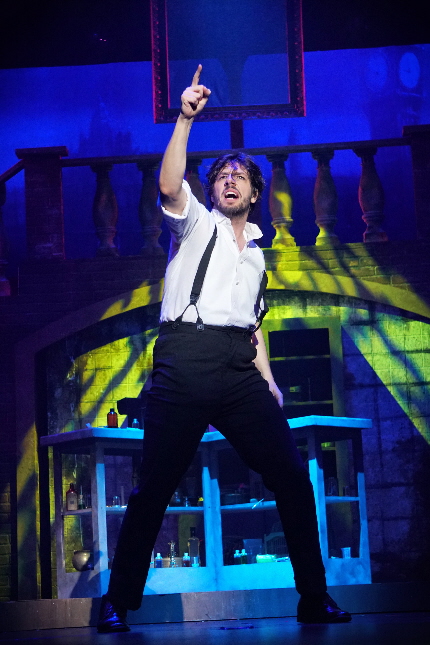 Frank Wildhorn’s oeuvre is one of those Continental Divides in American musical theater: You either love it – or tolerate it.

But if you’re going to perform a work by the pioneering prince of the pop power ballad, you have to go all in, and Slow Burn Theatre Company has done just that with its production of Jekyll & Hyde.

Slow Burn has hired three leads with more than enough lung power to rip the roof off in those American Idol numbers that Wildhorn wrote, all of which end with one long deafening note whose primary purpose is to blow out the auditorium speakers and some people’s eardrums.

This critic is not a big Wildhorn fan although he has friends with taste who adore his work. But it’s hard to argue whether Slow Burn has invested all of its talent, skill and resources into producing a version that should thoroughly please the legion of die-hard Jekkies (or is it Hydeheads?)

Tony Edgerton (recently Rooster in The Wick’s Annie) passionately intones Jekyll’s altruistic intentions, and slips into Hyde with a change in timbre, planting his legs differently, letting his hair fall over his face and standing in green light. He’s not physically as imposing as some others who have done the role, but he is singing his heart out with total conviction.

Carla Bordonada brings down the house as the sultry smitten Lucy every time she weighs into one of those bravura belt songs that Wildhorn tailored for Linda Eder and seemingly designed to make the European pop charts as stand alone hits with no connection to the musical. (Think Andrew Lloyd Webber’s success this way with Phantom songs). Her clarion pipes are one of the reasons to see, well, hear the show.

Lindsey Corey has been a mainstay of local theater now for years with a range from the titular Violet to the Lady of the Lake in Spamalot. But her soaring gorgeous voice as the fiancée Emma is unusually expressive here, evoking a character with more depth than it is often played.

It’s Wildhorn on steroids, so on the Spinal Tap 10-point volume dial, the show starts at 7, quickly moves to 8, then shoots up to 10 and spend much of its time at 11 or 12.  But that’s how it’s written and director Patrick Fitzwater doesn’t have much say over that.

The ham-handed book and mediocre lyrics are by Leslie Bricusse who has had easily one of the most uneven careers ranging from Stop The World I Want To Get Off and “The Candy Man” to the worst Sherlock Holmes musical ever written. An actual J&H couplet: “He hates the upper class / He must be on his ass.”

The sole interesting aspect is how Bricusse and Wildhorn highlight (and then hammer over and over and over) the unfair class system with the heartless one percenters doing everything but twirling their moustaches. While Jekyll holds forth on his noble dream of separating the evil out of Mankind, it’s never clear what Jekyll meant to do with Hyde if he had been successful.

If you start asking questions like how someone can be stabbed to death with a wooden cane or why Lucy falls in love with Jekyll after less than 10 minutes of interaction or why she stays insanely in love with the abusive Hyde or why (like Lois Lane not recognizing Superman as Clark Kent) not even Jekyll’s fiancée and best friend recognize Jekyll because Hyde hasn’t combed his hair – if you ask questions like that, you’re not going along for the ride. You have to buy in to the show’s vision and style.

My late-teen “plus one” felt things ran a bit slow in the long run up to Jekyll quaffing his first vial of Coke Zero. But once the green lights started flashing and the murders began, he was mesmerized.

One complaint about the staging in this and many Slow Burn shows. The Amaturo auditorium has a relatively deep playing area compared to some other venues and Fitzwater rarely has much happen on the apron or even close to the proscenium. This may be the result of some technical issues, such as lighting restrictions, but the intimacy of some scenes would ratchet up if they were placed closer to the audience. For example, in a major misstep, Jekyll and Emma sing their first stirring declaration of love at the very back of the stage, undercutting the effectiveness of their emotional proclamations and any sense of chemistry.

Still, musical director Paul Tine leads the seven-member live band in the requisite wall of sound. The wardrobe from Costume World is note perfect from bustles to top hats. Thomas Shorrock’s lighting is appropriately Gothic dark, although sometimes actors did not stand in the proper spot. The sound quality was adequate but singers often garbled their lyrics which may have been a blessing.

Jekyll & Hyde The Musical presented by Slow Burn Theatre Company through Feb. 17 at the Amaturo Theater, Broward Center For The Performing Arts, 201 SW 5th Ave., Fort Lauderdale. Performances are Thursday through Saturday at 7:30 p.m., Wednesday the 6th at 1 p.m. and Sunday at 2 p.m. Running time 2 hours 20 minutes including one intermission. Tickets are $47-$60. Call (954) 462-0222 for tickets, at www.browardcenter.org or #Ticketmaster.com; in person at Ticketmaster outlets or the Broward Center’s Auto Nation Box Office. Info at www.slowburntheatre.org 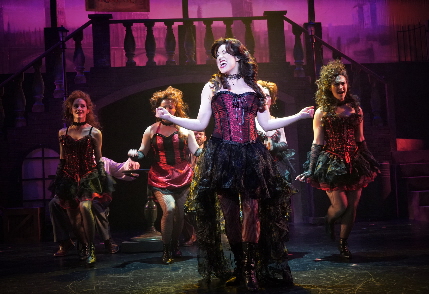