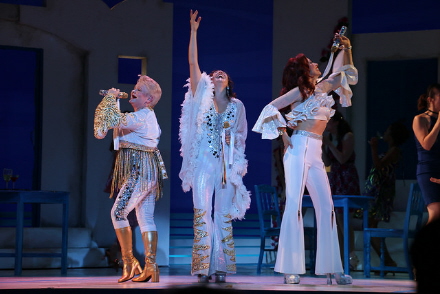 Three guesses what Riverside Theatre production this is from?

VERO BEACH — Riverside Theatre throws the gauntlet at your feet with its professional production of Mamma Mia! So relent. Pick it up and have a ball at this bouncy juke box musical.

This Mamma Mia! is simply as good as it gets. It has personality, beauty, energy, passion and Broadway worthy performances.

The musical’s book is by Catherine Johnson and is all about love. The compositions and lyrics are by Benny Andersson and Björn Ulvaeus, former members of ABBA, the 70s Swedish pop group responsible for some of the best feel-good music to wake us from our hard rock stupor. ABBA’s best known works saturate this musical, including “Honey, Honey,” “Fernando,” “Dancing Queen” and “Mamma Mia.” If you’re humming right now, then this show is most definitely for you.

Johnson sets her simple but engaging storyline in Greece, where young Sophie is getting ready to marry handsome Sky. Hoping to discover the identity of her father, Sophie sends wedding invitations to three men who, 21 years ago, caught the eye of her mother, Donna, who owns a tavern in the town. Two of Donna’s old girlfriends from a former singing trio also arrive.

In Riverside’s production (in association with Philadelphia’s legendary Walnut Street Theatre), director/choreographer Richard Stafford begins the show with an ebullient and story-telling dance sequence in which the chorus appears like a wave, casting beautiful, gleaming Sophie onto the shore and into the arms of Sky.

This smart, artistic touch is only the first in an evening filled with fresh visuals, playful choreography and immaculate vocals.

Anne Brummel, who electrified the stage as the title role in Riverside’s Mystery of Edwin Drood lets loose her powerful stage presence and muscular voice in the role of the mother of the bride, Donna. This amazing performer seems incapable of a misstep. She has tackled the big roles for women in American musical theater, including lead roles in national tours of Wicked (Elphaba), Evita (Eva) and Cats (Grizabella).  Here, she stops the show with her heart-wrenching performance of “The Winner Takes It All” when she agonizes over the end of her relationship with Sam, her real lost love.

Sam is the most seriously drawn of the trio of possible fathers. He is played by Eric Kunze, who has that experienced, stage ease and meticulous perfection which comes from a lot of professional experience. Indeed, he has performed major roles on Broadway including Marius in Les Miserables and Chris in Miss Saigon. He and Brummel deliver a sensational “S.O.S.” when it’s clear they still love each other.

Jonas Cohen is wonderful and heartfelt as Harry Bright, a bumbling Londoner happy to take on what he thinks is his sudden fatherhood. Christopher Sutton is warm and utterly likable as Bill, an Aussie who is adventurous enough to walk Sophie down the aisle.

Donna’s two girlfriends are played by a couple of scene-stealing, very funny and power-voiced women. Lyn Philistine is Tanya, the sexy woman who sings “Does Your Mother Know” to a flirtatious boy toy. And Charis Leos is drop dead perfect as mouthy Rosie, a confident woman who has her eye on Bill and sings “Take a Chance on Me.”

The show does not tease for long. It’s just midway through the first act when Rosie, Tanya and Donna gather to reminisce about their good old singing days and unleash “Chiquitita” and “Dancing Queen.” And yes, the audience goes wild for that scene.

But through all these wonderful voices and powerful performances, it is Laura Giknis who walks away with your heart in her role of Sophie. Petite and lively Giknis evokes images of a young Kristen Chenoweth. And she’s probably tired of hear that by now. But like Chenoweth, she certainly has the meticulous voice which wants to sing… all the time. And she has such fun doing it. It’s as if Giknis is just waiting to explode into song at any urging. She’s fun and pert and excellently cast in the role of young Sophie.

You’ll also find yourself keeping an eye on elegant Kristyn Pope, the ensemble’s dance captain. She’s got some amazing moves. And Schyler Conaway as Sky, who has some amazing abs.

This is the show that had a rather backward journey to Broadway.  First produced in London, it had its American opening in San Francisco, then in Los Angeles, then Chicago and finally New York City.

It’s become a musical theater phenom since then, playing worldwide to audiences that pop to their feet at the curtain call to bounce and sway to the feel-good show.

As reminded on Riverside’s opening night by producing artistic director Allen D. Cornell in his brief curtain speech, the show opened on Broadway less than a month before 9/11 and became eagerly embraced by audiences needing something to buoy their souls.

It remains such. And when the person next to you starts humming the tunes, don’t let it bother you. It’s gonna happen. Because Mamma Mia! at Riverside is infectious.