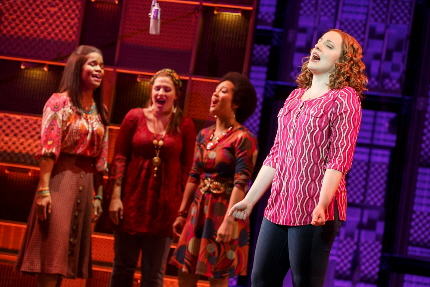 Validation – the affirmation that what you valued and invested yourself in does matter – is one of the most powerfully effective facets of both entertainment and art.

And that, we’ll venture, is the overwhelming virtue of Beautiful – The Carole King Musical whose national tour is enjoying a splendid visit to the Arsht Center starring the winning Julia Knitel and a cast that glows with energy.

It is nearly impossible for this critic to put his prejudices inside a box and be as objective as this subjective job can allow. Carole King’s legacy and that of her buddy James Taylor are, indeed, the soundtrack of the most formative period of my life and what persists to this day.

Many Boomers in the audience were goners from the opening fanfare of the overture. We laughed warmly recognizing the tentative chords of this song or the other in their early piano-only form, usually preceded by the composers shyly offering a line like “Well, this is just a first draft of something I’m trying out.…”

The crowd was mesmerized as King, then her writing friends-competitors Barry Mann and Cynthia Weil, and finally producer Don Kirschner joined her in a transcendently arranged, “You’ve Got A Friend.”

When the fully-actualized Carole King finally emerges to sing “(You Make Me Feel Like) A Natural Woman” as a powerful anthem, some in the crowd hummed along quietly and cheered at the end as they recognized the pieces of her human puzzle falling into their proper place.

By the time the cast made its curtain call with a foot-stomping version of “I Feel The Earth Move,” the usually-tamped down Tuesday crowd sang along as if it was a gospel paean in church.

This musical traces a small but high profile portion of the professional and personal evolution of the iconic singer-songwriter. The first act charts a shy 16-year-old ugly duckling from Brooklyn who pens a dozen 1960s chart-toppers you forgot she wrote through her partnership and marriage with the troubled Gerry Goffin.

The second act follows her discovery of self-worth, her growing independence and the development of her fresh voice culminating in the iconic album Tapestry. It’s about as gorgeous a transformation into a swan as any fiction writer could hope for. Even if you are not a Boomer, the journey echoes most of the audience’s own maturation. Every time Carole took a step toward independence and a stronger sense of self-worth, the Arsht crowd broke into applause.

Bookwriter Douglas McGrath, director Marc Bruni, musical supervisor Jason Howland and others on the creative team wove in many greatest hits into the fabric of an actual narrative arc (albeit sometime out of chronological order). For instance, when the unraveling Goffin recalls his troubled childhood, he relates it in “Up On The Roof.”

The difference is that Howland and orchestrator-arranger Steve Sitwell have funneled these well-known works through the prism of a Broadway musical. The songs intentionally sound close to the original recordings, but, in fact, they are louder, brighter, more technically sophisticated, augmented by a horn section, and often more thrilling than the most faithful jukebox revue could deliver.

Working hard to be fair, Beautiful is a bit strange. It uses classic Broadway musical structure and tropes to depict an introspective artist whose pop-rock and soft-pop milieu were that of someone uncomfortable in their own skin finding their self-worth. Boomers who grew up with Elvis, the Beatles, the Rolling Stones and Woodstock never expected in their youth that their rebellious you-adults-will-never-understand-us music would be played over supermarket loudspeakers. But they certainly never expected or sought that their music, their lives and their culture would be appropriated for a Broadway musical.

It’s simultaneous disconcerting and intriguing to hear Sitwell and Howland ramp up recognizable if amped up early stanzas of “The Locomotion” and “On Broadway” into high-energy but completely reconceived and rearranged Broadway production dance numbers.

King’s 2012 memoir A Natural Woman reveals that what is on stage is (a) close to the truth if not perfectly accurate and (b) reflects only about 20 percent of her many changes and incarnations. Even so, there’s a lot of ground to cover, so McGrath’s book is saddled with the required exposition of any bio-musical which must cherrypick and compress details into an unrealistic procession that virtually no musical has ever done successfully. Only the earnest acting and the audience’s willing suspension of disbelief makes that palatable.

Besides structuring the tale, where McGrath succeeds so well is suffusing the show with the copious humor that he discovered interviewing the four major characters in real life. (A subplot, required by any Broadway musical, is the parallel success of Mann and Weil.) These are funny people who are given a raft of witty lines and rejoinders from McGrath’s imagination. It becomes a running joke (maybe running a bit too often) when someone nearly dismisses as second-rate some song that we immediately realize will be a monster hit.

For instance, Mann tentatively tries out on the piano in his reedy tenor the opening strains of what he thinks is a chancy atypical song. Weil says, “The problem is the key; it needs to be lower. And I know just who should sing it.” Then we hear the basement baritone-bass of Bill Medley and his brother as they bring the house down with a full-fledged “You’ve Lost that Lovin’ Feeling.”

Still, songs like “Up On The Roof” and “Will You Still Love Me Tomorrow” sound far better as unadorned demos on stage sung by the principals rather than the slick versions we heard on the 45s and are depicted later in the show by electrifying but overproduced quartets.

The key, of course, is Knitel. The role won a Tony Award on Broadway for Jessie Mueller, who is currently in the new musical Waitress. Mueller’s sister Abby then led the first national road company to widespread acclaim including a run at the Broward Center.

Knitel gives an unclassifiable new riff that is just as valid and just as moving as her predecessors’ work. Exuding a very convincing outer-borough blue-collar vibe, Knitel is not conventionally beautiful (neither is King) but something glows from within (like King). Like everyone in the cast, Knitel has a strong Broadway quality voice funneled through pop and folk-rock music of the 60s and 70s. She sounds just enough like King not to be distracting but also not trying to be a Memorex copy which would also be distracting because King’s voice is inimitable.

The devastatingly handsome Liam Tobin who has been with tour for a while is her equal as the restless questing artist Goffin. Tobin makes Goffin’s eternal dissatisfaction credible, yet makes him an object of pity rather than contempt although he betrays King over and over. His voice can be angelic, especially with his heartfelt rendition of “Up On The Roof.”

Ben Funkhauser, another tour veteran, is the neurotic, hypochondriac composer nerd Barry Mann, played here as a classic Broadway comic relief foil in the mold of Woody Allen.  The lovely Erika Olson creates the lyricist Cynthia Weil who refuses to sacrifice her hard-won independence to the traditional marriage construct of the 1960s.

When we reviewed the tour in last year, we did not mention the hard working ensemble who inhabit a wide range of 60s groups from the Drifters to the Shirelles: Not only do they sing with style and verve but they execute Josh Prince’s era-evocative choreography with precision.

Local note: The plot includes several appearances by King’s mother, listed in the cast list as Genie, but who many here remember as the late Eugenia Gingold, an actress, director, theater critic and Carbonell voter in Delray Beach.

Throw in painfully accurate period costumes, a radioactive band, inventive visual elements and the total package for those of us of a certain age is a transporting experience.

Note: Opening night was almost sold out and the run is, as always at the Arsht, brief. This review is a heavily revised version of the one that ran when the same tour played the Broward Center in May and reflects significant cast changes among other elements.

Beautiful – The Carole King Musical plays through Feb. 19 from Broadway Across Americaat the Adrienne Arsht Center for the Performing Arts, 1300 Biscayne Blvd., Miami. Performances are 8 p.m. Tuesday through Saturday; 2 p.m. Saturday; 1 p.m. and 7 p.m. Sunday. Running time 2 hours 20 minutes including one intermission. Tickets are $35-$175. Call (305) 949-6722 for tickets, at www.arshtcenter.org