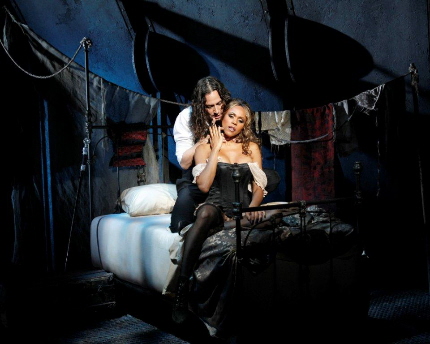 Let’s get it out of the way: Shaggy Constantine Maroulis is far better than you expect in the title role of this Broadway-bound revival of Jekyll & Hyde ending its national tour at the Kravis Center – although that might not be saying much.

He’s totally miscast and is unlikely to get another Tony acting nomination as he did inexplicably for Rock of Ages. But he’s giving it his earnest all in the vocal division and he subsumes his goofy, sexy persona to the character(s) even if convincing musical theater acting is not within his skill set.

And second in the must-get-it-said department: R&B recording star Deborah Cox as the doomed prostitute Lucy steals the entire show right off the stage of the Kravis Center with a gorgeous voice perfectly suited to Frank Wildhorn’s pop opera score.

Both are actually crafty casting choices by the producers who have reconceived  Wildhorn’s legitimate musical into an all out American Idol rock ’n’roll extravaganza complete with supposedly Edwardian characters indulging in raging melisma and ear-splitting screeches. Nothing and no one in this production is moving or thought-provoking, but then that’s not the goal.

Director Jeff Calhoun, late of the introspective folk musical Newsies, has started out this version with some restraint as a theater piece that happens to have an addiction to power ballads. He and his design team have come up with a fresh visual style and some nice moments of staging such as the five villainous Tea Party members starting their scene in their underwear and getting dressed in their finery during the number “Façade.”

But by the time the show has reached its penultimate two-faces-of-Eve showdown “Confrontation,” the whole thing has devolved into a screaming, unintelligible mess in which everything is way too much, from the wall of noise passing for words and music, to the pyrotechnic projections designed for a future arena tour, to whatever passes for acting.

Calhoun has enough originality and integrity not to copy early editions. In particular, he forgoes that classic staging for the confrontation in which the actor musically argues with himself by switching body language and a pinspot illuminates a different side of him with each ricocheting line of the song (She’s my daughter, she’s my sister, she’s my daughter). Instead, the agonized Jekyll duets with a pre-recorded image of Hyde pouring over his drawing room in an overblown video projection of an internal inferno.

This is not the worst production or starring performance of Jekyll & Hyde you’ve ever seen. That distinction is likely a tie between Sebastian Bach on Broadway and David Hasselhoff on DVD. A good deal of talent, skill and imagination has gone into this production during its 25 weeks on the road. But when it opens next month in Times Square for “a 13-week limited engagement,” you can bet the word “limited” is an accurate prognostication unless the Maroulis-Cox fan club is larger than we think.

But we may be wrong. Never count out Jekyll & Hyde’s fan base. This is hardly the first or even the tenth incarnation of the Wildhorn piece. Originally drafted around 1980 with a different lyricist and book writer, it debuted on stage in 1990, played 1,500 performances on Broadway beginning in 1997, toured several times, was preserved in multiple concept and cover albums in a dozen languages, and even survived Hasselhoff. J&H tends to be a Continental Divide among musical theater fans: Many of its acolytes who call themselves Jekkies are as rabid as Deadheads, vicariously savoring its raging passion and soaring music. Many others think the whole thing is way overwrought and inexcusably over the top. The current producers apparently thought the latter was a virtue. That whirring sound you hear is Robert Louis Stevenson spinning in his grave at 4000 rpm because he let this fall into public domain, allowing his 1886 novella to be reinvented and reinterpreted with impunity more times than Genesis.

J&H was the breakthrough work for the indefatigable Wildhorn who has always proven a real talent for crafting power ballads, although critics say he lets that obsession overpower his sense of theater. In J&H, Lucy rarely appears without the whole show coming to a halt so she can sing an aria that sounds designed to climb pop charts, even though that Broadway-to-radio conduit died out four decades ago.

Unfortunately, his score is chained to some of the most breathtakingly banal lyrics in recent memory, written by Leslie Bricusse, who apparently has not penned a really good song since he broke up with Anthony Newley.

So, back to Maroulis, who was surprisingly effective in Rock of Ages and to his credit has also performed in The Wedding Singer, Rent and (we’re not kidding) Jacques Brel Is Alive And Well And Living In Paris. He missed some upper notes opening night and he doesn’t have the necessary powerful bottom register that Colm Wilkinson and Robert Cuccioli have invested in it. But the American Idol finalist certainly can sing, from the quiet breathy pleas for a sympathetic ear to the decibel-bending fireworks.

As a stage persona, he exudes a sincerity that goes beyond Henry Jekyll’s altruistic search to separate and drive out the evil in Man’s nature. Maroulis is trying very hard to be a good musical theater actor, although with mixed results. He’s nearly convincing as the slightly nerdy, restrained Jekyll. Where he’s much less convincing (at least back in row S) is in conveying Hyde’s unredeemable evil, even though he does rough up and deepen the timbre of his voice. It should be noted here how far optometry has come since the 1880s: Maroulis untethers his mane from a pony tail and takes off his glasses and no one recognizes Hyde as Jekyll. Such near-sightedness was not equaled again until Lois Lane failed to recognize Superman when Clark Kent disguised himself with glasses.

We’d rather talk about Cox, who was a replacement star at the end of the run of  Aida (Elton John not Verdi). Blessed with a clear, smooth sound and years of craft honed in a recording studio, it truly is stunning when she stands and delivers a cri de couer ballad akin to electricity skipping across velvet. Like the originator of the role, Wildhorn’s wife Linda Eder, Cox even sounds a bit like Barbra Streisand in numbers like “Someone Like You” and “A New Life.” She’s no graduate of the Royal Academy of Dramatic Art either, but her singing carries enough passionate heft that she gets by well enough.

Again, that’s what’s missing here for all the talent and amperage. Within Bricusse’s script and Wildhorn’s vision, J&H does harbor an innately exciting story, it does raise intriguing moral questions, and when done right, it should touch your heart with the tragic tale of a good man who lost his soul trying to better humanity’s lot. But this edition is simply trying to overwhelm you with vocal and visual spectacle.