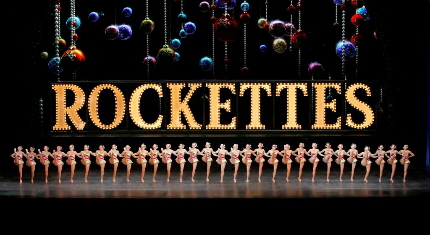 Thirty-six Rockettes tap out The Twelve Days of Christmas in the New York City version of the Radio City Christmas Spectacular. This tour version uses 18 dancers.

When I grew up in a suburb of New York City, my parents insisted that I would not live that close to Manhattan and not take in its iconic landmarks: the Statue of Liberty, the Natural History Museum, FAO Schwartz. But the one world-famous landmark we never visited, being Jewish, was the Radio City Christmas Spectacular. Thanks to the Kravis on Broadway series, I can cross that off my bucket list and report that it is, unlike much in life, precisely what its reputation promises.

Start with spectacular, derived from the word spectacle. Nearly 40 people on stage tapping, swirling or gracefully gesticulating while crooning to familiar tunes played by a lush if not live orchestra through 12 scenes. The ensemble is dressed in shimmering costumes, awash in ever-morphing lighting and exuding enough holiday cheer to dislodge even the stonier hearts.

Of course, the stars are the long-limbed and lovely Rockettes whose synchronized terpsichorean numbers are as crisp as an Arctic wind whether they are performing the 80-year-old classic “March of the Wooden Soldier”s or percussively snapping out “The Twelve Days of Christmas.” The Manhattan version on Radio City Music Hall’s massive stage holds 36 dancers; on the road, it’s 18, but they deliver a pretty impressive sight themselves whether they’re playing Santa’s reindeer in the opening or living tinsel in the finale with costumes containing 3,000 crystals.

If you’re just not feeling the season’s spirit yourself, the best way to see this is with a kid. Bring your own or borrow one from next door or just sit within a few feet of somebody else’s. Their delight is overwhelmingly infectious as they shriek or gasp at each new tableau. They clap along to the music when prompted to by the characters on stage – and sometimes even without prompting.

One of the surprises for the Scrooges is that while the whole thing is as G-rated as a Pixar cartoon, it fortunately is missing that manufactured button-pushing manipulative feel of nearly every sucrose-drenched Disney product in the last quarter-century. It’s all very show-bizzy and polished, but it never feels like someone is trying to sell you something, although there is a gift store in the lobby. A warm and genuine aura pervades it all, reminiscent of creamy tasty eggnog without the rum.

If the Rockettes are the headliners, a case can be made that the real star is the 50-foot LED screen that provides an animated ever-morphing series of seemingly 3D photorealistic backdrops that amp up the spectacular quotient a few hundred points. When Santa and his reindeer fly into the air, we follow them in to the clouds. Later massive tree ornaments float by and change colors like the largest screensaver of all time. But the most astounding set piece is the first act closer in which the live Rockettes board a mock-up of a New York City double-decker tour bus and take a night-time tour from Radio City, around Rockefeller Center and ending in Times Square (complete with product placements ads for Chase and New York Life). The viewpoint of the screen is timed with the turns of the bus on stage, giving a surprisingly convincing and enchanting travelogue for the audience.

Coming darn close is the Santa Claus number. St. Nick (Brent Bateman) manning a charity cauldron is questioned by a 14-year-old how he can be the real Santa Claus when they just passed two others down the street.  He explains in way that sounds plausible to a kid raised on Star Wars that he can be in many places at the same time. Einstein probably made this argument first. This is followed by a dance number in which one Santa bumps into a second. Then they bump into another pair. And then another quartet appears, until there’s a chorus line of 18 Rockettes in Santa suits happily traipsing about in time to the music. But then, the show’s other 20 dancers and singers enter in Santa suits so the entire stage is filled with Santas. And then, spoiler alert, as the number reaches its climax, the LED screen adds hundreds more Santas stretching back into the inky horizon, all dancing in perfect synchronization with the live performers. It’s a pretty astonishing moment.

It’s hard to figure out from the program who is responsible for this fusion of theater and technology, although some credit is due supervising director Linda Haberman, associate director/choreographer Julie Branam and scenic designer Patrick Fahey.

If we were on Santa’s knee, we might pass on the Red Ryder BB gun and ask for a live orchestra, but that’s carping. The quality of the sound here is superb, which is not always the case at the Kravis.

The evening moves briskly, rarely holding for more than a few seconds of applause. The show’s ADD take on The Nutcracker is delightful although the two-act ballet is cut to about a seven-minute Tchaikovsky’s Greatest Hits version.

If you’ve seen the show before, this 2013 edition is mixture of old reliable numbers dusted off and updated plus several new ones. A devout Christian might begin to wonder whose holiday this is because the first ten numbers are about as secular as can be, but the show’s ends with an unabashedly spiritual Living Nativity tableau featuring stunning costumes for the Magi and their retinue, plus a triumphant finale of “Joy To The World,” although it starts with a disco beat.

The whole endeavor is a fresh and charming way to celebrate the holiday.

Note: The opening night audience got a special treat for just that performance. Famed mystery writer James Patterson, who lives in the county and also writes children’s books, began the show by sitting in a red leather armchair and reading Clement Moore’s “Twas The Night Before Christmas” to a half-dozen moppets on stage in their holiday finery. Patterson has been a generous supporter and proselytizer for literacy for many years. To see a question and answer interview with him about this interest, click here.