Laggy And Gardner Are Beguiling In Sylvia, But BRTG’s Comedy Turns Sluggish 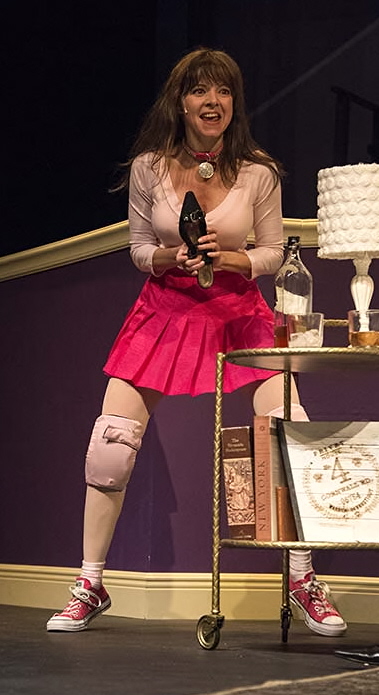 It would be neither fair nor accurate – but tempting – to say that Boca Raton Theatre Guild’s production of A.R. Gurney’s comedy Sylvia is a dog. It isn’t quite.

The satire about a mutt that nearly destroys an empty nesters’ marriage has some virtues starting with a delightful performance from one actress and an admirably solid one from another.

But there is no way to say this nicely: A show that has earned raves elsewhere elicits plenty of laughs early on, but peters out into a production where you check your watch because a mundane performance from one actor and terribly flat performances from another actor drag down what should be an effervescent comedy.

Gurney’s 1995 script is a hilarious fantasy in which Greg, a Manhattan businessman entering mid-life crisis territory, brings home an adoring and adorable scruffy stray from a park. His wife Kate, who teaches Shakespeare to inner city kids, is not so enthused about the new addition but that doesn’t overcome Greg’s attachment to the frisky newcomer, Sylvia.

There are a few unusual things about Sylvia. First, she is played by a woman, in this case, the lively and comely Jacqueline Laggy. The second is Sylvia converses with Greg and Kate – a reverse Doctor Doolittle feat unacknowledged by the couple or the playwright as being anything unusual. Despite scratching herself, leaping into the arms of strangers and a dozen other dog behaviors, Sylvia proves herself quite chatty with an urbanite’s attitude.

Greg’s attraction deepens, treating Sylvia precisely like a 50ish husband infatuated by a new young mistress — without the sex, thank you. Rather than Sylvia becoming dependent on Greg, Sylvia encourages Greg’s dependence. Kate grows jealous and then downright furious as she is unconsciously shut out by Greg. Kate says, “I didn’t think I could hate anybody but Nixon. I want to put DCON in her dog dish.”

The humor results in part from Greg lavishing the same adoring attentions he would pay to a lover. The other source of humor is rooted in seeing a dog acting and speaking what a human would do and say in social situations, and also hearing a dog articulate exactly what you think your dog is saying when he jumps on his hind legs or bolts out the door. For instance, asked to perform some tricks, Sylvia  doesn’t mind fetching a ball if it’ll get her a treat, but she balks at rolling over on the floor because it’s demeaning.

Laggy’s playbill bio says she has three cats, but she has the dog thing nailed, especially that internal monologue you always suspect is going on when your pet is barking wildly. Laggy bounds onto the stage as bright-eyed as a puppy, but exuding a street kid’s knowledge that self-satisfaction is job one. Playing the adoring subservient pet is just a means to an end for Laggy’s Sylvia.

Whether sitting back on her haunches or shaking her body like an ecstatic pole dancer, Laggy (along with director Genie Croft) has created precisely the engaging creature that Gurney sought. She’s especially funny cursing out a passing cat in a Noo Yawk accent, lacing well-chosen profanities among taunts like,” You’re disgusting. You’re a disgrace to the animal kingdom.” Laggy is the reason to see the show.

Patti Gardner has the less showy role as the neglected wife, but as always, Gardner’s solid work enlivens a show that badly needs it when Laggy is off stage. Gardner, who starred in the Guild’s fine Tale of the Allergist’s Wife last season, embodies the dependable professional who you never catch acting. As with that previous role, Gardner is perfectly believable as an intelligent, caring woman trapped in an ever-worsening situation that strains credibility. Her portrayal of a recognizable next-door neighbor who decides to fight for her marriage provides this madcap evening its only realistic mooring and, therefore, its only chance for eliciting the audience’s empathy as well as its laughter.

One indication of Gardner’s skill and dedication is that she still projects energy in her scenes with her husband played by Guild artistic director Keith Garsson and with a trio of outsiders all played by Mario Betto. Actors need partners to give them some vitality to feed off; the two men provide so little that Gardner’s ability to keep pitching is praiseworthy. Director Croft should stick these fellas with a cattle prod. Garsson, intentionally or not, plays Greg as such a washed-out nebbish that he cannot carry his share of the play. He starts off pretty well, but as Greg gets lost in Sylvia’s thrall, Garsson’s vigor dissipates.

But the weak link is Betto, reputedly a very nice man who writes and occasionally performs gender-bending shows featuring his Dame Edna-like alter ego “Miss Finesse.” He famously appeared at a Carbonell Award ceremony in a stunning gown and wig. Here he plays three roles: a macho blue-collar dog lover who gives Greg advice in the park, Kate’s grande-dame friend, and a marriage counselor of intentionally ambiguous sexuality. Although not required, the three parts are often cast with one actor and often with a male. That’s not the problem, although his Harvey Fierstein physique shoves the production’s tone from satire into cartoonland when he plays the society matron. The real problem is that while Betto is obviously trying, he plays all three characters the same way: none has any vigor, animation, vocal inflection or even the verve that you can bet Betto brings to his own shows.

Croft and the cast pepper the show with neatly observed bits of business that come from having had a pet, such as how an animal always seems to get tangled up in a leash during a walk. But the lack of sustained forward motion and dash falls at Croft’s door.

Another of the production’s assets is Alberto Arroyo who did most of the costumes during the last few seasons for the Caldwell Theatre. Sylvia appears in an increasingly swanky procession of Arroyo’s outfits reflecting her master showering her with presents. But in the opening scene when Sylvia has been living on the street a few months, Arroyo triumphs by dressing her in a gloriously ratty, soiled thick brown sweater with arms ways too long for the actress, soot-stained frayed blue jeans, earth boots and  kneepads. All that plus Laggy’s ratted hairstyle and smudged face make her both adorable and irresistibly needy.

Also intriguing is Sean McClelland’s set design for the couple’s upscale apartment appointed with framed New Yorker magazine covers, and the adjoining park backed up by a cityscape of skyscrapers towering over the actors.

Boca Raton Theatre Guild is a former community theater now in its second professional season and its level of quality has been reaching upward, but this entry has a foot in each incarnation.